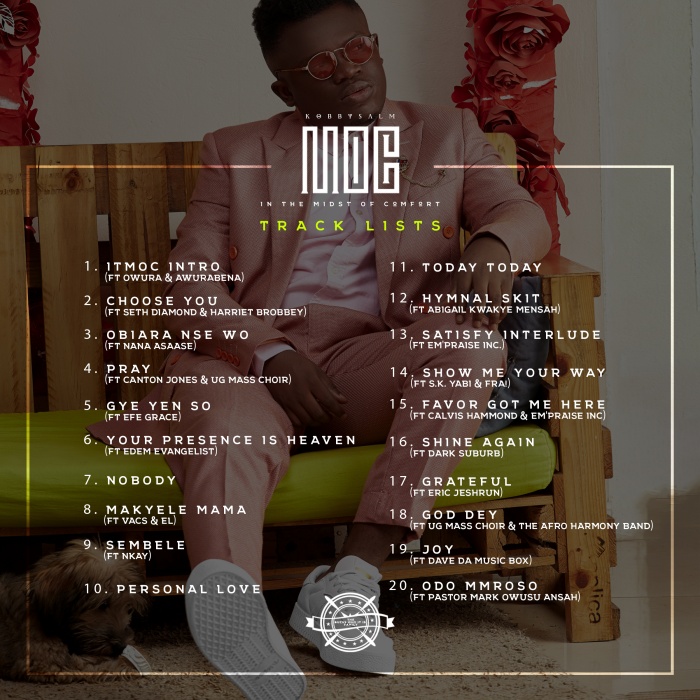 Kobbysalm releases official  album art cover, tracklist and credits ahead of  his debut album #ITMOC (In The Midst Of Comfort)

Weeks and weeks have passed by and after two successful album listening sessions i.e a private one which had industry personalities attend and a public session which had family, friends, fans and colleagues in attendance , the road towards the outdooring of the prestigious #itmoc album is gradually hitting its  climax as the official album art cover was displayed at the latter session by the award winning gospel artiste Kobbysalm.

The album art cover depicts truly what the album name suggests (in the midst of comfort) which has been countlessly expressed by kobbysalm on any platform whereby questions have been raised to the choosing of the name #itmoc for his debut album. The colourful piece of art identifies the artist in a different position but the true beauty lies in the story that depicts the representation of the album hence the use of another animate thing as an object which perfectly brings the design to life.

Below is the detailed breakdown of the 20 track list showcasing the artistes featured on each song with credits formed and based on arrangements, writing of the song, instrumentation, production , mixing and mastering of songs. The surface of the tracklist would have the songs numbered as the following ;

As time draws closer and closer to the main release of the album be reminded that you can pre order the album  here https://efie.co/kuczh   and stand a chance of getting an #itmoc merch handed over to you swiftly.  To double and cross check out kobbysalm’s #itmoc merch please kindly visit the following page links https://instagram.com/kobbysalm_merch_official?igshid=vf96otpr21p7  https://www.facebook.com/kobbysalm_merch_official-629385837694705/

My Rap Is A Divine Mystery – Says Kobbysalm