Over the past decade for two, Ghanaians fell in love with two entertainment show hosts, Jay Foley and Jeremie Van-Garshong.

The two had a chemistry so strong that translated to their work and fans loved them for that.

From being cohosts on 4syte TV being cohosts to each other on Live Fm’s Breakfast Club show, they are forever in the hearts of entertainment lovers.

While the two have gone their separate ways with Jay Foley now hosting a TV show on Joy Prime and Jeremie doing her own thing, their void is yet to be filled–and Jay Foley wants Ghanaians to know.

In a Facebook post a while ago, Jay Foley stated that without any doubt, she and Jeremie contributed immensely to the arts.

“We contributed our bit to the arts. We hosted, interviewed and entertained almost entertainment industry influencer. We were Jay Foley and Jeremie,” he wrote.

Jay however, added that he believes their void is yet to be filled as no entertainment show with 2 hosts has lived up to them.

“Till date, I’m yet to see an entertainment show with 2 hosts that nailed it like us. Jeremie, like I always say, be proud of who you are,” he added. 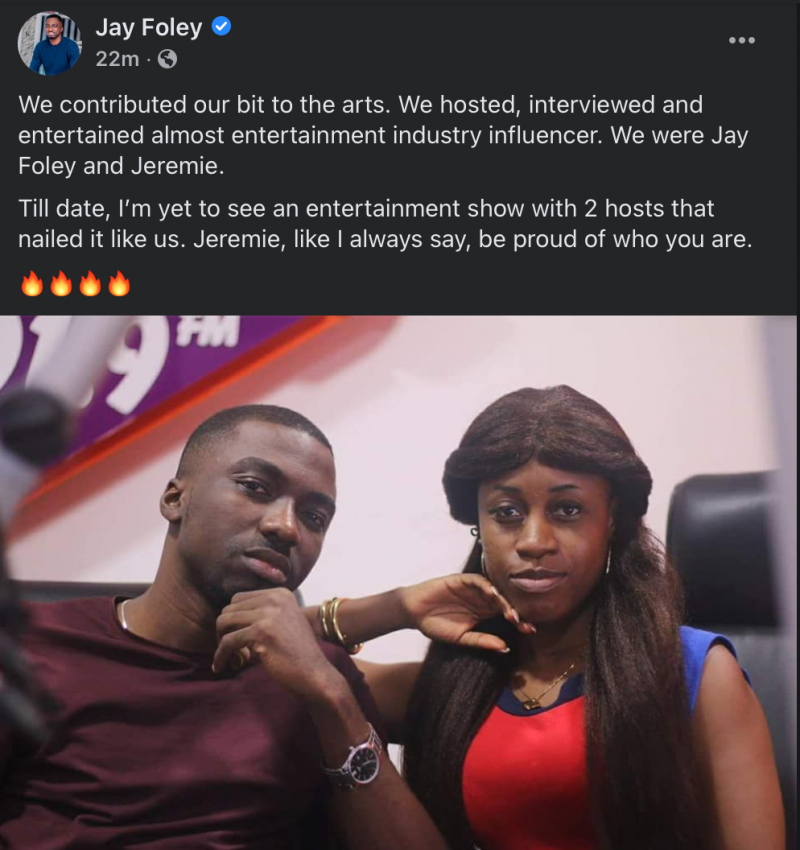 The woman who led the “Me nsa aka ooo” TV commercial 13 years ago to promote MTN’s Mobile Money (MoMo) has been gifted a 2-bedroom house. END_OF_DOCUMENT_TOKEN_TO_BE_REPLACED

It’s difficult to predict where Stonebwoy will be in the coming days, weeks, months, or years. As a musician with a keen interest in pushing his sound to the world and etching his name in the minds of new fans, 2022 has been described as his busiest music year thus far since gaining mainstream recognition in 2012 with Pull Up—seven years after he made his official debut—the musician confirmed this via social media after his last summer show. END_OF_DOCUMENT_TOKEN_TO_BE_REPLACED

Ghanaian actress, Nana Ama McBrown has revealed that there’s absolutely no bad blood between her and her ex boyfriend, rapper, Okyeame Kwame. END_OF_DOCUMENT_TOKEN_TO_BE_REPLACED

Veteran Ghanaian actor, Kofi Adjorlolo has denied claims that he was set to marry the mother of popular Dancehall act, Shatta Wale. END_OF_DOCUMENT_TOKEN_TO_BE_REPLACED