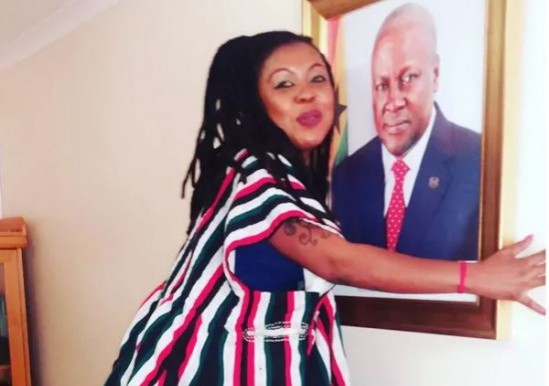 Controversial “Queen of Comedy” Afia Schwarzenegger has revealed that when she took the decision to campaign for the New Patriotic Party (NPP) in the December 2020 elections, her “father” leader of the New Democratic Congress (NDC) was not happy.

Before the December 2020 elections, Afia Schwarzenegger had given her loyalty to the NDC and campaigned for John Mahama massively in the 2012 elections.

However, she changed her mind and voted for the NPP in December 2020, citing the “free education” policy by Nana Akufo-Addo as the reason.

Speaking in an interview with Zionfelix, the mother of three revealed that John Mahama called to ask why she had decided to vote for and campaign for the NPP.

“Of course and I told him why. He wasn’t happy at all but his kids did they go to Kumasi High?” she asked Zion.

She added; “if he takes me as his daughter like how I have taken him as a father, and take my kids to an international school won’t it be nice? My white children if they school abroad won’t it be nice?

“John Mahama you know what you did and you were doing,” she concluded.

My sons like women a lot- Afia Schwarzenegger reveals