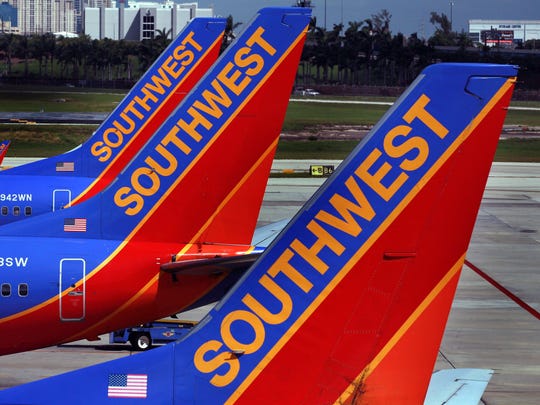 A Southwest Airlines flight attendant alleges in a lawsuit that two pilots streamed airplane bathroom video to the cockpit in February 2017. KPHO-TV reports that Renee Steinaker said she was working on a flight from Phoenix to Pittsburgh when she went into the cockpit and noticed an iPad mounted to the windshield, live streaming from one of the plane’s lavatories.

KPHO-TV reports that according to the lawsuit, about two and a half hours into the flight, the pilot, Terry Graham, asked Steinaker to sit in the cockpit while he used the restroom since protocol states that two people must be in the cockpit at all times. Once inside, Steinaker noticed the iPad that she said was live streaming video from the lavatory, where Graham now was.

In her lawsuit, she says the co-pilot, Ryan Russell, told her “there was a camera in the lavatory and that it was hidden so no one would ever find it.” He also allegedly told her not to tell anyone because it was on the “downlow (sic).”

A Southwest Airlines flight attendant alleges in a lawsuit that two pilots streamed airplane bathroom video to the cockpit in February 2017. KPHO

Russell allegedly said “the cameras were new and they were on all of Southwest Airlines 737-800” planes but Steinaker didn’t believe him.

Steinaker said she took a photo of the iPad and then reported the incident to Southwest Airlines. However, according to court documents, Graham and Russell were never disciplined.

Steinaker claims that after reporting the incident, she was monitored by supervisors in a “threatening and bizarre manner.”

According to KPHO, court papers indicate that Steinaker and other flight attendants were told to keep quiet about what they saw. Steinaker was allegedly warned, “if this got out, if this went public, no one, I mean no one, would ever fly our airline again.”

Southwest Airlines released this statement to CBS News: “The safety and security of our Employees and Customers is Southwest’s uncompromising priority. As such, Southwest does not place cameras in the lavatories of our aircraft. At this time, we have no other comment on the pending litigation.”

Late Saturday afternoon, Southwest told the Arizona Republic, part of the USA TODAY Network, that there was no camera in the bathroom and that the airline would vigorously defend the lawsuit.

A suit filed in federal court for the District of Arizona alleges that on Feb. 27, 2017, Renee Steinaker was working as a flight attendant on Flight 1088 between Pittsburgh and Phoenix.

On Saturday afternoon, a spokeswoman for Southwest Airlines sent the Arizona Republic an additional email, stating:

“Southwest will vigorously defend the lawsuit. When the incident happened two years ago, we investigated the allegations and addressed the situation with the crew involved. We can confirm from our investigation that there was never a camera in the lavatory; the incident was an inappropriate attempt at humor which the company did not condone.”

We asked for clarification about why the airline believes it was a bad attempt at humor, how it knows there was no camera and whether the pilots faced discipline.

The spokesperson responded: “At this time, we have no other comment on the pending litigation.”