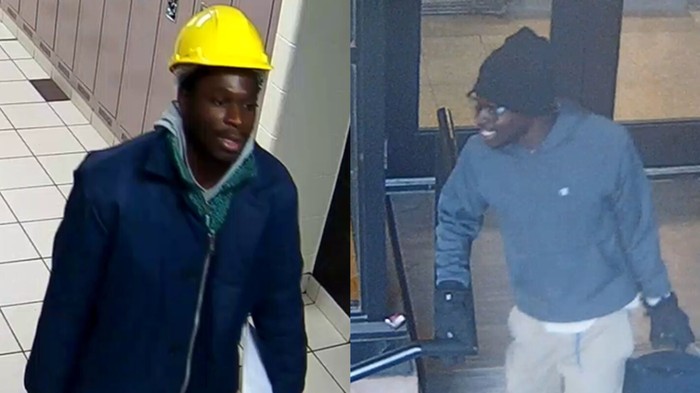 Samuel Opoku, a young man accused of tossing faecal matter on five people is due in a Toronto courtroom  later today.

Opoku is charged with five counts each of assault with a weapon and mischief. The 23-year-old was arrested Tuesday night in relation to the three alleged attacks.

Dozens of people — including students from the University of Toronto, the site of one of the alleged incidents — crowded outside the packed courtroom Wednesday morning.

Police allege a man threw liquefied fecal matter on a woman and a young person on Friday at U of T’s John P. Robarts Research Library.

The first incident took place Nov. 22, when Opoku allegedly entered the University of Toronto’s John P. Robarts Research Library and poured a bucket of crap on a man and a woman.

On Nov 22, Opoku allegedly carried out a similar malodorous assault, dumping feces on a woman and man at York University’s Scott Library. Security photos from York show Opoku smiling as he carries what appears to be a bucket.

On Monday night, Opoku allegedly hurled liquefied feces on a woman outside of U of T’s St. George campus.

Toronto police spokesman Victor Kwong previously told VICE that the victims were “disgusted.” He said forensics teams are analysing the contents of one of the buckets to determine if it does contain feces.

“Great work by @TorontoPolice arresting an individual in the “feces attacks” investigation,” Tory tweeted. “He can’t face justice or be given help until apprehended and it seems our police have that in hand. I hope this arrest will help calm concern on campuses and across the city.”

Related Topics:Samuel Opoku
Up Next