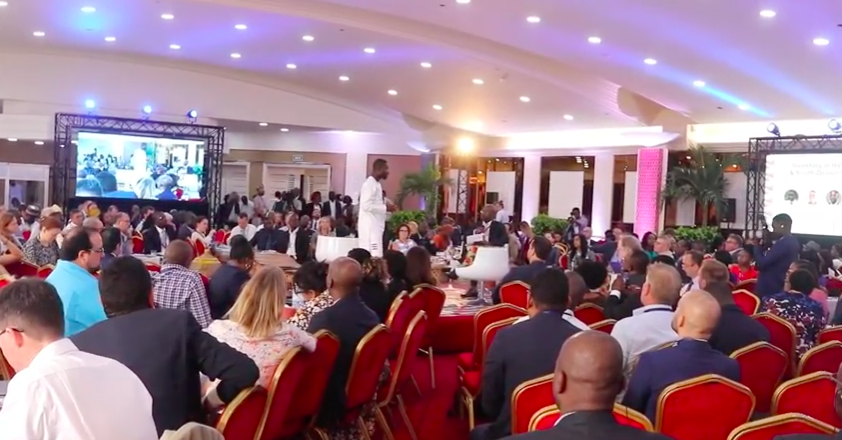 The 25 year old was listed as part of the speakers at the International Finance Corporation (IFC)’s Sustainability Exchange, the Forum convenes game changers in infrastructure, natural resources, science, and the arts to challenge assumptions and build a pipeline of sustainable investments across Africa and the globe. Other speakers includedDr. Shungu Gwarinda, PHD interim CEO & director of programme; Graça Machel Trust,Howard Man, the Senior International Law Advisor, Iisd; Minister of Mines and Geology of the Republic of the Guinea, Abdoulaye Magassouba; Ambassador of Canada to Senegal,  H.E Lise Filiatrault;  CEO of Anglo American Mark Cutifani amongst many others.

He shared the story of how he started Adroit 360, and spoke about the hurdles he faced while growing up and how some opportunities he came across paved way for him to become what he is today. He opined that there is the need for stakeholders to invest and create opportunities for young people in tech especially those coming from deprived areas. He believes that technology is driving the future and it is therefore important for governments to include technology into their educational system and also create equal opportunities that will benefit the youth.

Jacob was born in one of the most deprived areas in Accra. His father was a mechanic and his mother a hawker. He hawked with his mother while growing up and at a point became a cobbler. With a determination to increase his income stream, he tried a number of businesses; he tried music, became a footballer and started out as a journalist for a media company. One day on his way to cover a story he met a boy who told him about programming and became interested. He learnt how to program and digital skills even without a laptop by moving from one café to the other, this set the pace to be the beginning of Adroit 360.

Today Adroit 360 has grown to become a premium preferred tech company that offers its services to multinational companies, top companies in Ghana and other startups as well. Today Adroit has expanded to employ 25 young individuals.

Jacob continues to share his story, to inspire many young people like himself tobe persistent and proactive in taking up opportunities to better their lives. Last year he began the Aspire with Jay campaign which seeks train and mentor young people to harness quality entrepreneurial skills and personal development.

A little over a month after winning the “Female Songwriter of Excellence” award at the famous Maranatha Awards in the USA, Yvonne Asamoah-Tawiah popularly known as Minister Yvonne has been nominated by the Ghana National Gospel Music Awards for their upcoming Christian music awards. END_OF_DOCUMENT_TOKEN_TO_BE_REPLACED

The leadership of University of Ghana Students’ Representative Council are spearheading plans for the 64th UGSRC week celebration. END_OF_DOCUMENT_TOKEN_TO_BE_REPLACED

Experiencing acid refluxes once in a while is not too uncommon. However, when this problem persists and shows up every time you eat, it needs special attention and diagnosis. END_OF_DOCUMENT_TOKEN_TO_BE_REPLACED

Slots are the most attractive casino games, and have been so for a while, according to data from Statista. Studies show that 70% of real money casino games on the internet are slots, as of late 2019.  END_OF_DOCUMENT_TOKEN_TO_BE_REPLACED