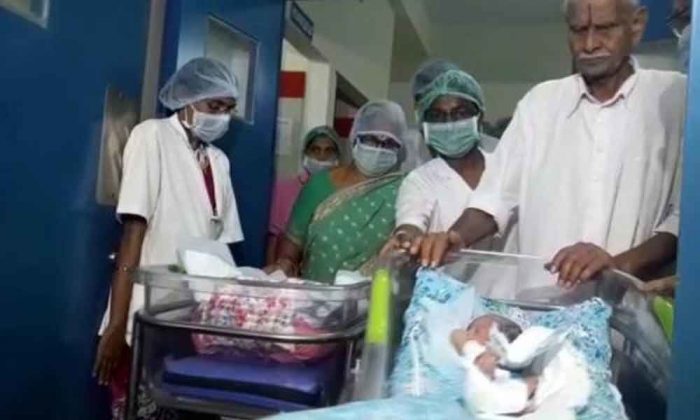 A 74-year old woman has delivered twin baby girls after 54-years of marriage.


Indian newspaper, The Hans India reported that the delivery was done in a private hospital in Guntur city on Thursday, September 5th. According to doctors, Yerramatti Raja Rao who hails from Nelapartipadu in East Godavari district married Mangayamma on March 22, 1962.

The marriage was fruitless for decades until Yerramatti read about a pregnant 55-year-old woman residing near her house. The woman became pregnant through IVF. Mangayamma drew inspiration from the neighbour and along with her husband approached Ahalya Nursing Home in Guntur city.

They met IVF experts who collected Mangayamma’s husband sperm and tried in the IVF system. The doctors efforts were fruitful. Since then, Mangayamma was under the supervision of doctors in the nursing home.

Dr.Umashankar performed the cesarean on the 74 year-old woman and she delivered two baby girls. Dr. Umashankar said: ” It is another world record. Yerramatti and her husband Mangamma are also happy”.

While the birth may be an Indian record, it is not a world record. The world record holder, according to the Guinness Book of World Records was Anatolia Vertadella, a 101-year-old Italian woman. She gave birth to a 9-pound baby in 2016 after a controversial ovary transplant widely criticised by medical professionals because of her advanced age.

In India, a woman, Daljinder Kaur believed to be at least 70 years old, gave birth to a son named Arman (meaning “wish” in Hindi) on April 19, 2016. Guinness World Records also recognized the world record for the Oldest mother to conceive naturally, set by British woman Dawn Brooke, who became the oldest natural mother when she gave birth to a son by Caesarian section at the age of 59 years. She conceived accidentally, having managed to ovulate past her last period.

END_OF_DOCUMENT_TOKEN_TO_BE_REPLACED

“What do celebrities & influential leaders believe in?” As you know, celebrities and influential leaders are role models for young and old generations, and they can influence society and impact the world negatively and positively. Spiritual leader and multi-award-winning life coach Asim Aliloski has seen that successful people on top of their game have been searching for a higher power. END_OF_DOCUMENT_TOKEN_TO_BE_REPLACED

American rapper, Kanye West has reacted to the news of the end of the relationship between his ex-wife Kim Kardashian and Pete Davidson. END_OF_DOCUMENT_TOKEN_TO_BE_REPLACED

Prosecutors are reportedly asking the federal court to seize about $28K from R Kelly’s prison-inmate account since he has $140,000 in court-ordered fines. END_OF_DOCUMENT_TOKEN_TO_BE_REPLACED

Elon Musk has accused the social media platform, Twitter, of fraudulently holding back information about the company as part of a countersuit. END_OF_DOCUMENT_TOKEN_TO_BE_REPLACED