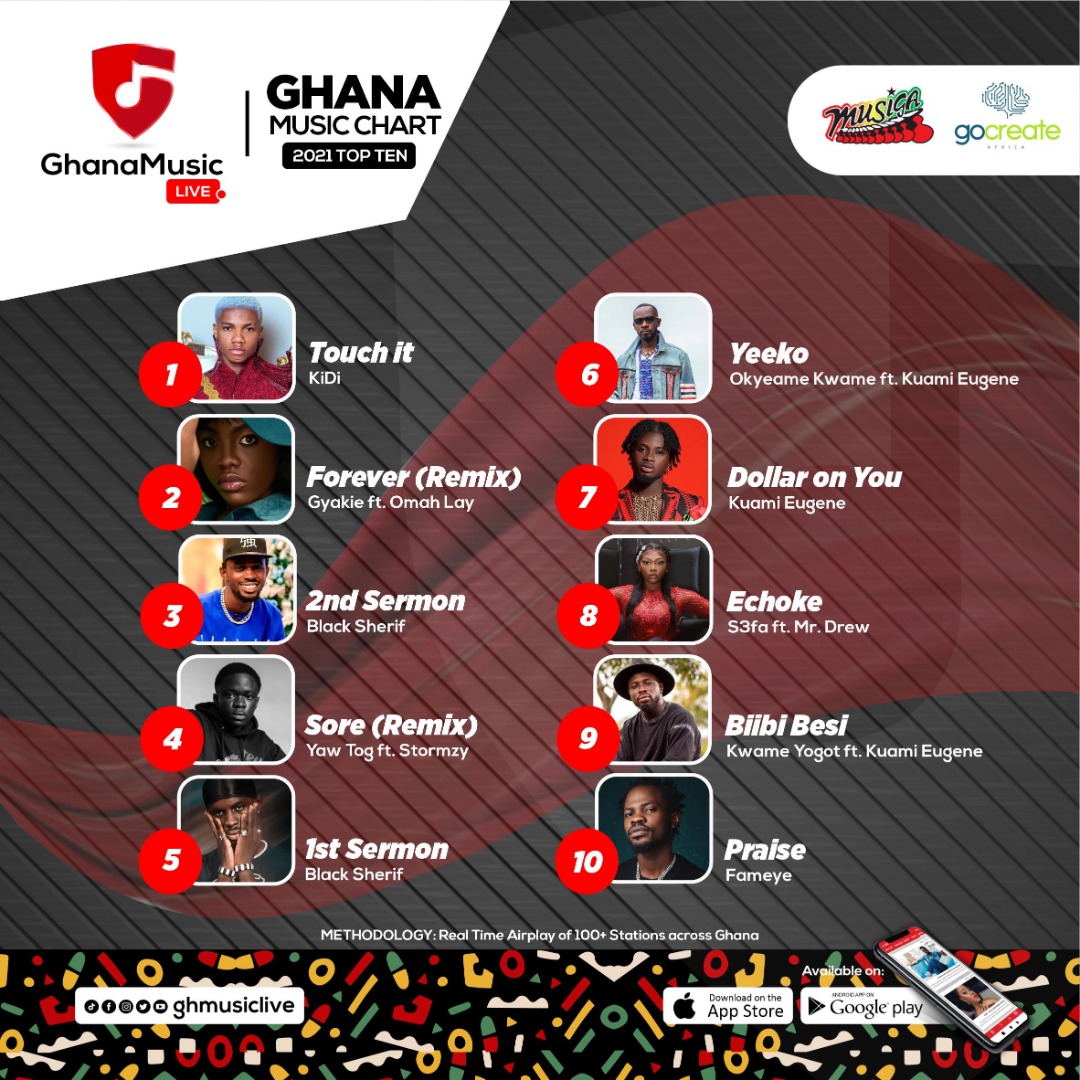 Ghanaian Music is alive, and so are we. Over the last two years, as Covid-19 kept us largely at home, entertainment gave us some respite, but sweet holy sound—music—gave us somewhere to go. It transported us, mentally, into the pits or peaks of our emotions; to imagined escapes and unimagined adventures.

Some Artistes churned out some of their best work yet in 2021. There has been plenty fare ready for the dance floor, be the rave at home or at work, from chartbusters like Kuami Eugene through to singers like Abiana to Dj’s like Nektunez and some amazing new entrants into mainstream Ghanaian Music.

In 2021, Ghanaian music charted a new course, broke into world charts, filled event venues, and created household names. Last year saw KiDi follow up the success of “Say Cheese” with an amazing international breaking release – Touch it. Amaarae set and broke all sorts of records last year, “Chic” has simply been on fire. Yaw Tog caused a stir with his collaboration with Kwesi Arthur and UK International – Stormzy and toped it up with a BET Amplified feature as did Amaarae.

The year 2021 was an eventful one of releases, milestones, and recognition of Ghanaian music. As established talents like Sarkodie and Stonebwoy kept the pace with releases, new names like Black Sherif & Gyakie did enough to stake their claim with critically-acclaimed projects that shot them right atop the echelon.
Below is a list of the top 10 songs released in 2021 which had the most airplay. Do note that there are songs which might have done better than those which made it into the year’s chart but were released the year before.


10. Praise – Fameye
Praise is easily one of the best records of 2021 and perhaps the best Fameye has delivered in his entire career. The song is simply a masterpiece, so well composed and arranged. If any tune could bring the dead back to life it would be the wonderful coral harmonies and melodies of this song doing the trick.
It is a song you cannot stop listening to, it’s a Praise of Fameye’s career, it is as though the rapper/singer sort to showcase his writing skill and exhibit all the music in him.

Praise shares the story of his life and could but for a few words pass for Gospel song of the year.


9. Biibi Besi – Kwame Yogot ft. Kuami Eugene
Biibi Besi is an absolute euphoric jam. Listening to the song, it seems almost criminal that Kuami Eugene and Kwame Yogot had never collaborated before. The ease with which two of today’s most revered songwriters share this track is astonishing—their voices the perfect complement in tone, timbre, power, and style.
The beautiful reggae tone track blends an afro and dance vibe which is off the hook. Yogot delivers his comic rap in a flawless manner. I’m convinced that they’re just trying to tie our brains into knots. There are tempo changes and random style left turns.


8. Echoke – S3fa ft. Mr. Drew
The Queen of Black Avenue Muzik, S3fa, served a hot dance dish with Mr. Drew on the ones and twos. This song was the party in itself as it became the heart of the dancefloor. Easily S3fa’s biggest hit and arguably the most successful song of her label, the song took her places and saw the singer dominate charts for weeks.

The song had an attention grabbing video and a beautiful dance to it. This song put S3fa on the music map and has had her chocked with shows.


7. Dollar on you – Kuami Eugene
Kuami Eugene reclaims his place as a bona fide hit maker with “Dollar On You”. His first release of 2021 was on steroids. He sings about treating his lover to nothing but money. In an Interview, the ‘Rockstar’ said “Dollar on you talks about the Significance of Sharing”.

The song quickly became a regular feature on radio, street corners, pubs and parties. Kuami’s showing after his “Son of Africa” album was strong and impressive. The song has a captivating afro dance vibe and was accompanied by an amazing star studded video.

It would certainly be safe to put your dollar on this outright banger.


6. Yeeko – Okyeame Kwame ft. Kuami Eugene
In the hay days of Dr. Kwame Nkrumah there was a popular phrase used to describe him; “Nkrumah Never Dies” – This best describes Okyeame Kwame’s spell in the Ghanaian Music Industry. Most rappers ascend and over a decade and half lose their hold significantly. Kwame has been the exception to this rule. For over two decades, Okyeame Kwame has been relevant and churns out a huge hit every 3 years or so. 2021 was no different as he teamed with Lynx Entertainment’s Kuami Eugene to produce an outright street anthem
Anytime one has felt that the hot air balloon of confidence that accompany Kwame’s timely records seem to be deflating, the eccentric rapper pulls his magic wand and boom – a hit.

Black Sherif has released 1st Sermon to the elation of an eager audience. The 3-minute drill project formed part of his “Road To The Tape” series. Several top entertainment personalities drooled over the progress of this fast-rising act. The release satisfied the thirst of music lovers as they waited impatiently for its release after leaked footages were extensively shared and greatly admired.
The song amplifies daily hustle, the need for loyalty and survival in the music business. Sherif got his congregates so drunk on his sermon that he became a house hold name overnight.

Yaw Tog hit a huge milestone with the remix of his chart-topping single ‘Sore’ featuring South London-based rapper Stormzy and Kwesi Arthur. With over 3.4 million streams on music streaming service Spotify by July, the song was the second behind Sarkodie’s biggest commercial hit song – Adonai which featured Castro with 17 million streams. This was the story until KiDi “Touched it”.
The music video for the song which was shot in Kumasi and directed by KooPoku Studios has over 5 million views on Youtube.

Black Sherif’s introductory hit ‘First Sermon’ was only a sequel to the singular 2021 hit before, on and after arrival song – Second Sermon. The song depicts a raw and fearless street spiel, that blasted him to the status of a viral sensation.

The song was produced by Stallion and is ferried in aching desire and rebellious glamour. This proper hustlers anthem got the streets crazy and turned “Angels” to Blog Breakdown analysts.
The self-styled leader of Sad Boys Country – Kweku Frimpong has a delicate responsibility; thus far, he has kept to his promise of delivering nothing but trouble. The song has attracted the attention of several local and international artistes culminating in a remix with “the African Giant” – Burna Boy


2. Forever Remix – Gyakie ft. Omah Lay
This is perhaps the most criticized remix in 2021. “Forever” was doing great and I dare say loved by foes of the young talent. To many a pundit, it was unnecessary and thus energies and resources should have been directed towards another project.
However, months down the lane “Team Gyakie” has been proven right with the tune blowing the tightly shut and closely guarded Nigerian Music market wide open. It is one of the most Streamed foreign songs on the Nigerian Market. The video did awesome for the young talent and the original video is about 10million views shy of the remix which has some 23million views.
By September, the song had been Streamed some 5million times on Spotify alone. By end of year, she had become the most Streamed Ghanaian Female Artiste on Spotify. The song has “forever” opened doors for the talent.


1. Touch it – KiDi
This song was simply untouchable. It became the most Streamed Ghanaian song ever on Spotify and set all sorts of records after only a few months of release.

It is easily the most decorated song of the year. At the VGMA’s when KiDi said he would be back, little did we know that comeback was of a song and the height it would conquer. Touch it is back and in style. Here are a few records the song blessed the industry with…

The Adentan Circuit Court on Tuesday, 18 January 2022, issued a warrant for the arrest of Deputy Minister of Tourism, Arts and Culture Mark Okraku Mantey. END_OF_DOCUMENT_TOKEN_TO_BE_REPLACED

KiDi’s global hit “TOUCH IT” which went viral on social media has been nominated for ‘Outstanding International Song’ at the 53rd National Association for the Advancement of Colored People (NACCP) Image Awards. END_OF_DOCUMENT_TOKEN_TO_BE_REPLACED

Actress Adowa Pee who is famed for her role in the popular Sunday Cantata drama on GTV has been hit with a health condition she is struggling to manage and has publicly called for help. END_OF_DOCUMENT_TOKEN_TO_BE_REPLACED

One of Ghana’s most celebrated food vloggers watched and loved worldwide, Sweet Adjeley has disclosed the question most of her Ghanaian audience wants answers to. END_OF_DOCUMENT_TOKEN_TO_BE_REPLACED