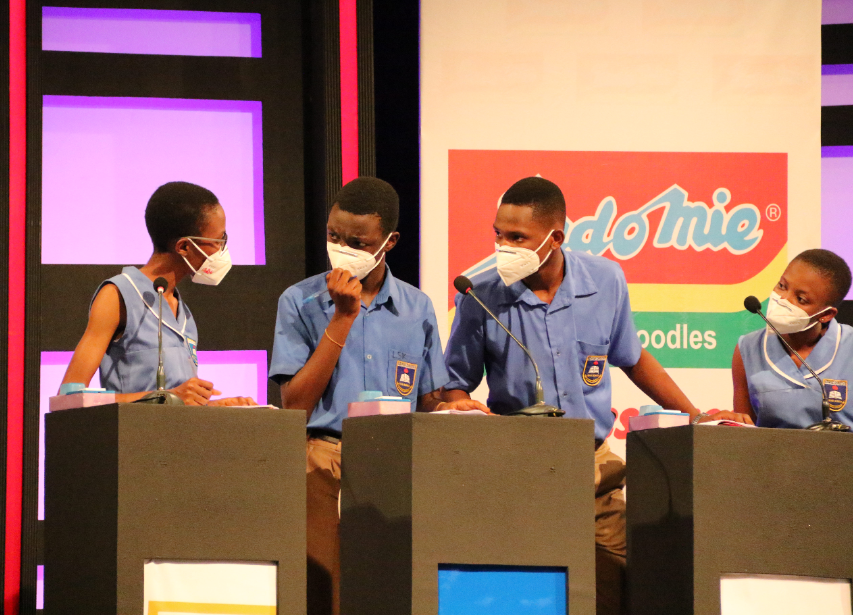 Stakes were high for the contest between Accra Girls’ Senior High School and Sonrise Christian High. Many rooted for the Accra contingents and expected the capital city girls to do their magic. The Ho contenders however knew what they were up for and of course, who they were up to face. They surely had done their research well and made accurate analysis!

Tension increased when the beginning round of the contest ended with a tie. Both schools had battled fiercely and made strategic moves in order to play the other away but it seemed either of the two institutions had planned for the day. They finished off the round with 20 points each. The next bout was meant to be a tie breaker and put the deserving school in the lead. It came as shocker, not because Sonrise managed to break away in the lead but the margin with which they did so.

All through the academic responses, Sonrise sailed with 50 heavy points stamping Accra Girls’ into the negative range at -10. It obviously must have been a hard time for the all-female representatives as it would take a lot of effort and many right answers to rub shoulders with their counterparts at that point. If that could happen, the only chances were the remaining two rounds.

It was a ding for the third round to begin. Toes curled, lips bitten and heartbeats literally heard as supporters glared in anticipation for what would be a miracle. Expectedly, there was a surprise. Rather unlikely, it was not from the expected camp. Sonrise Christian High dragged the Accra Girls in the mud and made them a mess it would probably take uncertain years to undo. 60 points to nil! A further stretch the girls could be felt willingly letting their end of the rope – if it were a tug of war.

130 points against Accra Girls’ 10 and there’s just the one round till the final whistle. Will they stress it? Must they? These could be the least of questions the Accra contenders may be asking themselves. But well, every game has rules and once they started, they definitely had to finish. It was quite a hassle-free round for the Ho counterparts. Maybe they felt it was a done deal and it was probably play time. Or, they could just allow their opponents a little shine…just a little.

At the end of the contest Accra Girls’ Senior High had added 20 more points from the last round to their standing 10 pitching them at an overall 30 score. Sonrise on the other hand rounded off with an additional 10, carrying the crown of victory with a total 140 points. It was a massacre! Accra Girls’ has been booted out of #TheSharksQuiz Season 4. The drama and action unfold in the subsequent contests.