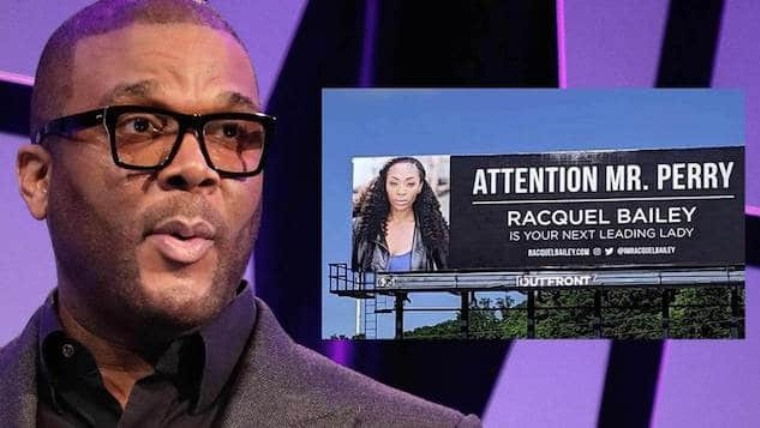 Despite receiving a light scolding from Tyler Perry for pulling a billboard stunt to get his attention, Racquel Bailey can now for say for sure that her $2,000 investment paid off as she was offered a spot in the ace producer and actor’s new project.

Recall that Tyler politely chastised the actress for escalating her attention-grabbing tactics with a billboard. He also told her she will be offered a spot in his movies if she comes out good at his auditions which have no entry fee.

‘This is not the way to get my attention if you’re looking for a role in one of my shows. Please DON’T DO THIS, SAVE YOUR MONEY!! This is the third time that someone has done this. PLEASE STOP! To audition is FREE!! I’m sure you can use that money for a better purpose,’ he wrote in the lengthy caption.

‘And by the way, you were great in THE NIGHT OF! It was my favorite show a couple years ago. I ALREADY SAW YOU!! So just audition and keep your money!! Again, I appreciate your effort, but that’s not the way to work for me. God bless you dreamer. I have no doubt you will make it one day!!’ he added.

The 32-year-old actress, however, moved on from that and has been cast in a recurring role in Tyler Perry’s new drama “Sistas”. Racquel spent last week in Atlanta at Tyler Perry Studios, which was where she strategically placed her billboards in May.

TMZ reported that she will be playing the police officer who had a past relationship with one of the lead characters. Perry was on set directing the episode in which Bailey will appear … a dream come true for her.

Her billboard stunt was quite successful as she was contacted by several casting directors thereafter, got about 20 auditions and landed 2 roles before the “Sistas” gig. She also has an audition with some known directors coming up soon.

Related Topics:Tyler Perry
Up Next