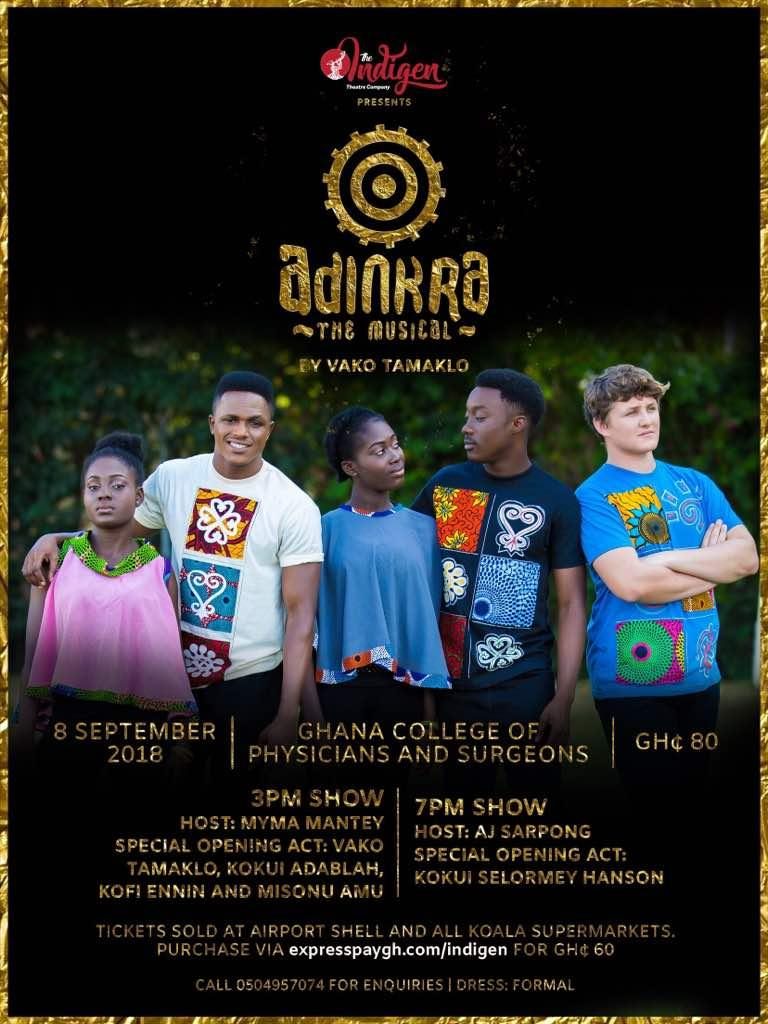 ‘Adinkra the musical’, a musical theater produced and organized by Indigen Theatre Company, is set to unearth new talents on September 8, 2018 at the Ghana College of Physicians and Surgeon, Accra. According to the Chief Executive Officer of Indigen Theater, Ms Vako Tamaklo, who is also the creator of the scripts and music for the show, ‘Adinkra the musical’ is her passion and so she decided to create a platform where she could develop new works and to invite the Ghanaian audience, and international audiences, into her world.   In an interview with the DAILY HERITAGE, she said that, the show’s target audience are mainly families, working professionals and young adults, which will allow the content to reach multiple channels such as churches, schools and corporate institutions. “This genre of entertainment also appeals to the expatriate and international communities where musical theatre may be a more developed industry as well as Ghanaians looking to explore more variety and innovation in the entertainment industry.”   She added that she conducted a survey a year ago asking respondents what kind of stories they wanted presented on stage, and responses centered predominantly on issues concerning family life, contemporary Ghanaian and African culture, and Christian/religious values.   “I used the Adinkra symbols as a foundation because there are a lot of proverbs and sayings within them that relate back to these areas, and I believed I could create a story that would weave them in and at the same time provide lessons on what we believe as a community. I wanted to provide a story that would leave it up to audience to question and decide what should be important in our society and to reflect on our current way of life.”   The music theater is written by Ms Tamaklo  and will be performed by a diverse group of performers who were casted which includes current students and alumni from The School of Performing Arts, University of Ghana, Legon, Ghana International School, Lincoln Community School, as well as freelance actors and musicians.   The event which will be hosted by AJ Sarpong will have a special opening act from Kokui Selormey, Vako Tamaklo, Kokui Adabla, Kofi Ennin, Misonu Amu and a few others as guest artistes to open the event with some music.   “Attendees should expect a magical experience of wonder, excitement and thrill as they are presented with images from our tradition and culture in a modern and innovative way with a world class and international standard. It is an event one cannot afford to miss! Tickets are available at Airport Shell and Koala Supermarkets, Airport, Labone and Osu as well as online at expresspaygh.com/indigen.”  Miss Tamaklo expressed.    ]]>

Related Topics:adinkra the musical
Up Next