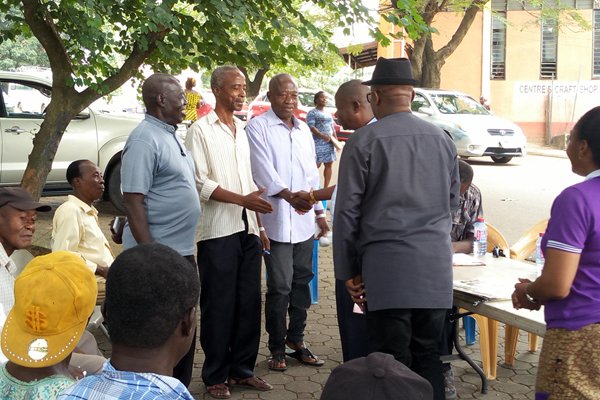 Ageing Musicians in Kumasi receives support from MUSIGA[/caption] 23 ageing musicians in the Ashanti region have benefited from the Ageing Musicians Welfare Fund of the Musicians Union of Ghana (MUSIGA). Each one of the musicians where presented with cash as part of, the union’s aim to support ageing and incapacitated musicians in the country. Some of the beneficiaries included octogenarians and septuagenarians such as Nana Yepemso, Kwaku Bona, Baafour Kyei, and -B.B Collins among others. Speaking at the event, First Vice President of the Union, Bessa Simons called on the current generation of musicians and corporate Ghana to support the fund to ensure that it grows to support more musicians as they age. According to the Secretary of AMWeF, J.V Owusu, the initiative by MUSIGA President, Bice Osei Kuffour ( Obour) is commendable, as he assured the veterans of continued support from AMWeF. He further disclosed that the fund has supported numerous ageing or incapacitated musicians since it was established in 2011 since Obour was elected MUSIGA President.]]>

The Media “Twists” My Words For Traffic- Bisa K’dei

Chris Fonye popularly known as “Hydraulix Fonye” is a Ghanaian producer, sound engineer, songwriter and singer with a vast experience in the Ghanaian entertainment industry. END_OF_DOCUMENT_TOKEN_TO_BE_REPLACED

Although there may be hundreds of afro-beats artists in the country, Highly Spiritual Music signee, Lasmid believes he is unique. END_OF_DOCUMENT_TOKEN_TO_BE_REPLACED

Highly Spiritual Music signee, Lasmid, has stated that he wasn’t expecting his song “Friday night” to reach such great heights within a short time frame. END_OF_DOCUMENT_TOKEN_TO_BE_REPLACED

The 2023 African Cup of Nations, AFCON initially scheduled for Côte d’Ivoire next June will now be held in January and February 2024 due to the concerns over the rainy season in the country. END_OF_DOCUMENT_TOKEN_TO_BE_REPLACED