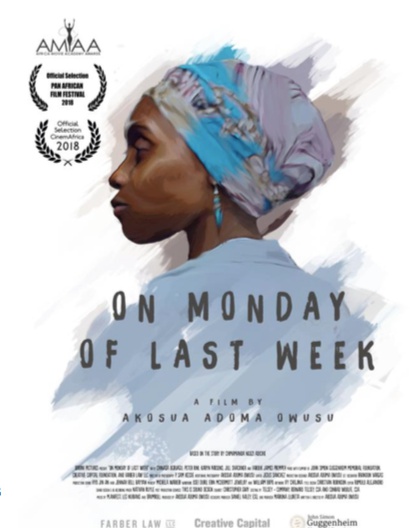 On heels of her recent Africa Movie Academy Awards nomination, renowned filmmaker and producer Akosua Adoma Owusu announces the release of On Monday Last Week, as well as a secondary project titled Mahogany Too. On Monday Last Week, a film adaptation of Chimamanda Adichie’s story of the same name is about a Nigerian immigrant Kamara (Chinasa Ogbuagu) who works as a nanny while waiting for her green card to be approved. Despite being an intellectual with a Masters degree, her interactions with the artistic wife, Tracy (Karyn Parsons) makes Kamara question perception of beauty, attraction, and identity. On Monday Last Week will celebrate its World Premiere at the 26th annual Pan African Film & Arts Festival, the largest film festival in the United States dedicated to the exhibition of Black film during Black History Month. In addition, the film has been selected for the Narrative Shorts competition at CinemAfrica Festival in Sweden this March. In conjunction, Obibini Pictures LLC is proud to announce the release of Mahogany Too, a retelling of the 1975 cult classic. Nigerian actress Esosa E (An African City) revives Diana Ross’s iconic portrayal of Tracy Chambers. Owusu’s creative use of analog cinematography and vintage tones emphasizes the essence of the character, as do the hip-retro fashion and styling of the film. Mahogany Too celebrated its World Premiere at the prestigious International Film Festival Rotterdam (IFFR) as part of their Pan African Cinema Today (PACT) themed program alongside works by legendary filmmakers Ousmane Sembene and Haile Gerima, and was the fourth project by Akosua Adoma Owusu to be included in the festival. Upcoming projects by Obibini Pictures LLC include the forthcoming feature Black Sunshine (which tells the story of a hairdresser with an albino daughter, who longs to escape her frustrating reality).]]>

Related Topics:akosua adoma owusu
Up Next

Sidechic Gang to premiere on March 3

The voting portal for the 2022 edition of the All Africa Music Awards (AFRIMA) opened to the public on Sunday, 25 September at 21:00 (CAT), to decide the winners of each of the 39 award categories, globally. END_OF_DOCUMENT_TOKEN_TO_BE_REPLACED

Ghanaian actress, Yvonne Nelson has issued an apology on behalf of Ghanaians to Stephen Appiah and his Black Stars colleagues. END_OF_DOCUMENT_TOKEN_TO_BE_REPLACED

Professor Elsie A. B. Effah Kaufmann, host of the popular National Science and Maths Quiz has shared a bit of her private life. END_OF_DOCUMENT_TOKEN_TO_BE_REPLACED

As the only Ghanaian female artist to perform on the Global Citizen Festival stage at the Black Star Square last night, Gyakie did an incredible job representing the country and doing her part in being a contributing voice for global change. END_OF_DOCUMENT_TOKEN_TO_BE_REPLACED

Although Ghanaians appreciate Professor Elsie A. B. Effah Kaufmann as the Quiz Mistress of the popular National Science and Maths Quiz, there are other things that they love about her. END_OF_DOCUMENT_TOKEN_TO_BE_REPLACED