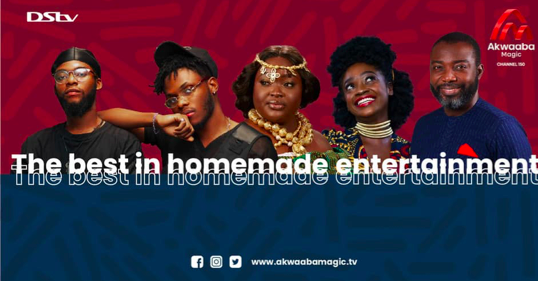 Dede is still trying to find her feet in the Robertson’s household amidst all the chaos and shenanigans of Madame Rama, Chantelle’s fake pregnancy and the taunting claws of Lovia. Catch dramadey at its best on Dede with some of your favorite stars like Adomaa, Joslyn Duma, Lydia Forson, Anita Erskine, David Dontoh and more, Weekdays at 8pm on Ch 150, available on DStv Compact, DStv App and Showmax.

Guess who is back at the Lartey’s to help unravel the truth? Yaa! Soraya can finally smile and brethe as she inches closer to the truth and poor Mayor, he gets accused for a crime he knows nothing about. If intense thriller is your cup of tea, don’t miss Inside Out, Wednesdays an Thursdays at 8: 30pm on Ch 150, available on DStv Compact, DStv App and Showmax.

Domestic abuse has become a very relevant topic and conversation point both in traditional and online media. This week on Sankofa, Michael Katahene and his team of fixers will try and help a family navigate and heal from a case of domestic abuse. Be sure to tune in Saturday night at 8pm to catch Sankofa, Saturday at 8pm on Ch 150, available on Ch 150, available on DStv Compact, DStv App and Showmax.

Do you believe in Magic? Join Rollie and Andy, as they take Michael Blankson and his friends on unbelievable and unforgettable magical journey, this Sunday at 8pm on Rollie and Andy: Magic in Us, on Ch 150, available on DStv Compact, DStv App and Showmax.

What happens at 21:30, stays at 21:30. There will be action, drama, suspense, thrills, and so much more! Ranging from the highly anticipated newcomers to the returning favourites, here’s what to look forward to.
HBO’s new limited series The Flight Attendant, which stars Kaley Cuoco of The Big Bang Theory, is one of the channel’s newest shows. This darkly comedic thriller, based on Chris Bohjalian’s novel of the same name, follows Cassie, a hard-drinking flight attendant who wakes up next to a dead man after a drunken date with him. In a panic, she flees the scene, but the FBI is hot on her tail, forcing her to try to clear her name. Catch The Flight Attendant, Mondays at 9:30pm on MNet Ch 101.

This gripping ten-episode legal thriller is led by Emmy-winner Bryan Cranston. When his teenage son is involved in a tragic accident, a respected New Orleans judge and his son are drawn into a high-stakes game of lies, deception, and difficult choices once it is revealed that the victim was the son of a notorious crime boss. Golden Globe-nominee Michael Stuhlbarg co-stars as the feared crime boss, and Hope Davis plays his wife. Catch Your Honour, Tuesdays at 9:30pm on MNet Ch 101.

In the second season of Prodigal Son, all of the main cast members return, including Tom Payne as criminal profiler Malcolm Bright and Michael Sheen as Martin Whitly, Malcolm’s father and serial killer known as The Surgeon. Also returning are Bellamy Young and Halson Sage, who portrayed Malcolm’s mother Jessica Whitly and sister Ainsely Whitly, respectively. Following a dramatic season one finale, season two begins with Bright’s personal life in disarray as a result of his sister Ainsley’s shocking actions. Catch Prodigal Son, Wednesdays at 9:30pm on MNet Ch 101.

Clarice is a new psychological horror-crime series created by Alex Kurtzman and Jenny Lumet, who have worked together on The Mummy (2017). It is based on Thomas Harris’s best-selling novel The Silence of the Lambs and serves as a follow-up of the 1991 film adaptation. The series stars Pretty Little Liars’ Rebecca Breeds as Clarice Starling, who returns to the field one year after the events of The Silence of the Lambs. Still troubled by the trauma of solving the notorious Buffalo Bill serial killer case, Claris is exposed to a string of new murders that will pull her into a new case that will tie her past to the present. Catch Clarice, Thursdays at 9:30pm on MNet Ch 101.

When season five of This Is Us premieres on M-Net, fans should expect another emotional rollercoaster. In a two-hour premiere, the Pearsons gather to celebrate their 40th birthday while musing about the day they were born. Viewers will be overjoyed to see all of their favourite characters return. That includes Jack, Rebecca, the Big Three, and their families. Other key characters such as Madison, Nicky, Jack Damon, and Toby also make a return. Catch This Is US, Fridays at 9:30pmon MNet Ch 101.

K-Drama lovers, this is for you! Catch two brand new series on tvn Ch 134 and KIX Ch 114, available on DStv Compact.
“Mama” follows three different families all dealing with different issues affecting their mothers. Dong-Sook (Uhm Jung-Hwa) is a single mother who works as a saleswoman for yogurt drinks and also works cleans apartments to make ends meet. Her world revolves around her son Won-Jae (Lee Hyung-Suk), who is afflicted with a disease that prevents him from walking. One day, Dong-Sook is diagnosed with cancer and her world comes crashing down. Eun-Sung (Ryu Hyun-Kyung) has always lived under the shadows of her famous opera singer mother Hee-Kyung (Jeon Su-Kyeong). Even as a married mother, Eun-Sung still at times feels like an assistant to her mother rather than a daughter. Catch Ma Ma, Saturdays at 5pm on KIX Ch 114.
Melting Me Softly is a romantic comedy about a variety show PD (Ji Chang Wook) and a part time worker (Won Jin Ah) at a broadcast station who are involved in a project where they are supposed to be frozen for 24 hours, but after something goes wrong, they instead wake up 20 years later. … Won Jin Ah is Go Mi Ran. Catch Melting Me Softly, Weekdays at 7:15pm on tvn Ch 134.

Looking to rent your favourite Hollywood blockbuster movies in the comfort of your home, anytime and anywhere? Press the green button on your Explora remote to rent Wonder Woman 1984 and Take Back on DStv Boxoffice.

Ghanaian veteran Abdul Razak Alhassan will look to improve his impressive record when he faces Jacob Malkoun this Sunday at #UFCVegas24 at 2pm on
S Action on Ch 230.

SuperSport viewers on DStv can look forward to a classic Italian rivalry as Serie A heavyweights Napoli and Internazionale meet at Stadio Diego Armando Maradona on Sunday 18 April 2021.

The teams have very different overall ambitions heading into this clash: Inter are looking to move a step closer to a first Serie A title in more than a decade, while Napoli are in a scrap for a berth in next season’s UEFA Champions League with Milan, Atalanta, Juventus, Lazio and Roma.

The Nerazzurri boss Antonio Conte knows that the Scudetto is close for his team but has warned against complacency in this final stretch of the season.

“We know full well that Serie A is very difficult, and every match is a battle to get the victory. The closer we get to the finish line, the clearer we can see the prize at the end,” said Conte. “Everyone is looking at that direction and we see it from a different angle to the others right now, but we still have it all to do. We’ve achieved nothing yet.”

Napoli manager Gennaro Gattuso wants his side to keep their heads down and “think of one opponent at a time” as they focus on their goal of finishing in the top four of the standings. The Neapolitans boss has come under fire from many quarters this season, but a Champions League qualification amidst such tough competition would be a fine achievement. Don’t miss it, Sunday at 6:45pm, LIVE on SuperSport Football, SuperSport Maximo 2.

Viewers on DStv can look forward to seeing the Black Stars centre-back in action, as ESPN brings live action from the 2021-22 MLS season this coming week, Friday 16 to Thursday 22 April 2021.

Mensah has been on Crew’s books since 2017, having previously featured for AshantiGold, Free State Stars, Udinese, Granada, Evian and Anzhi Makhachkala.

The 30-year-old, who won the African Youth Championships and U-20 World Cup with Ghana in 2009 and has been part of six Africa Cup of Nations squads and two World Cup squads with the Black Stars, has made over 100 appearances for Columbus and last season led them to the MLS Cup title.

For the 2021-22 season, Mensah wants to see the MLS Cup remain in Ohio: “We have the same goal to win the ultimate. Pre-season is always tough but we take it day by day and prepare for the first game and the second and we go on and approach the season very strong.”

Viewers on DStv and GOtv can see Mensah in action on the evening of Sunday 18 April when Crew play host to Philadelphia Union. Being back in action will hopefully bring the defender back into contention for selection to the Ghana national team, having not had a call-up since the 2019 AFCON. See Jonathan Mensah in the following match live on ESPN, Sunday at 9:55pm: MLS, Columbus Crew v Philadelphia Union – LIVE on ESPN Ch 219 and 218.

Related Topics:Akwaaba Magic
Up Next

Jesus Gang: God Showed Up And Showed Out