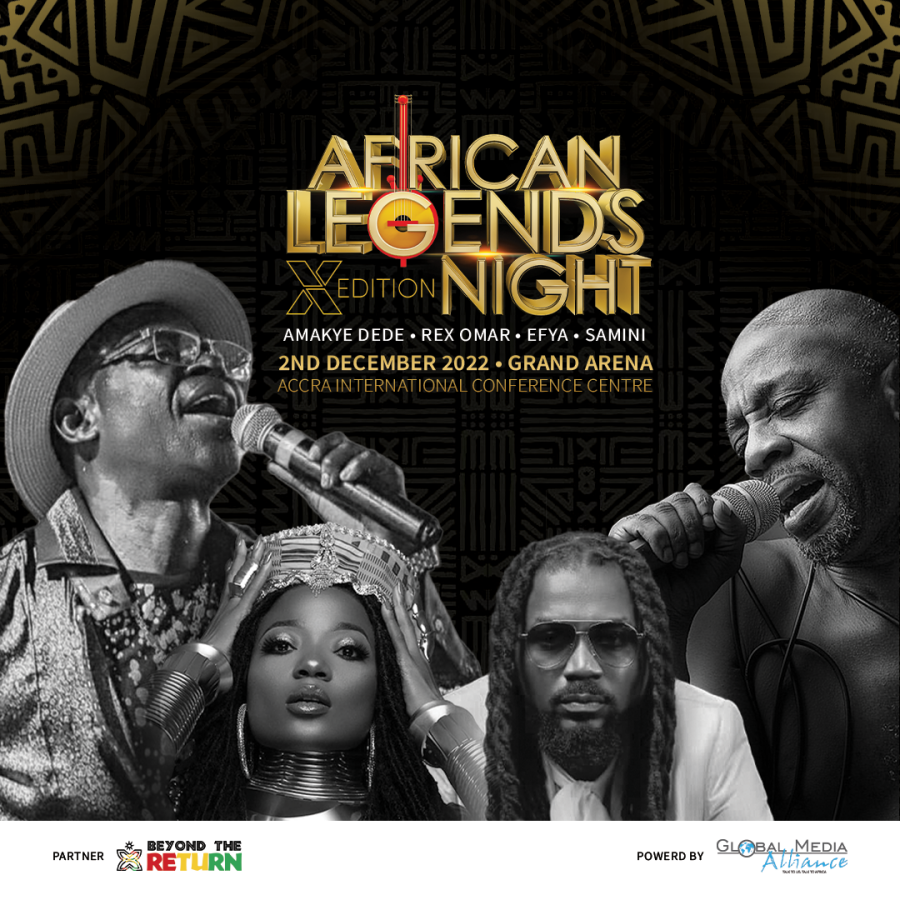 It’s all going to be a full Ghanaian line-up as Amakye Dede, Rex Omar, Efya and Samini have been announced as headliners for the 10th anniversary concert of African Legends Night.

The African Legends Night is a high-profile concert which recognizes and celebrates African musicians who are considered living legends.

Over the ten-year period, the event has witnessed over 20 headliners and close to 50 performances by authentic African musicians from a number of African countries such as Ghana, Ivory Coast, Nigeria, DR. Congo, Namibia, South Africa among others.

In marking the 10th anniversary, the concert will for the first time be hosted in December, offering a new “December In Ghana” event experience for Ghanaians and the Diaspora.

“With our legendary headline line-up for the concert coupled with these new initiatives, what African Legends Night promises this year is something that will certainly push the show to greater heights,” said Ernest Boateng, CEO of Global Media Alliance.

Mr. Agyeman said the Ghana Tourism Authority has taken a deliberate policy to position Ghana as the best destination for music tourism especially in December, and commended Global Media Alliance for hosting the African Legends Night in December which has been endorsed by the GTA under the Beyond The Return initiative.

These legends together with other amazing talents such as Wiyaala, Steve Bedi, Yaa Yaa (Bertha), Lady May, Trigmatic, Becca, eShun, Efya, Dela Hayes and her all-female band and others have thrilled tens of thousands of patrons.

“These legends have played major shows, won multiple awards – both local and international and they have given a night masterpiece of performances that have created indelible marks in the hearts and minds of the audience,” said Jerry Ofori, Head of Events at Global Media Alliance.

Hugh Masekela was the first headline artiste for African Legends Night. He was also the first act to do a back-to-back performance the following year.

Yvonne Chaka Chaka was the first Female Headline Performer for the African Legends Night in 2016. That year was a female-dominated concert with Akosua Agyapong, Wiyaala, Becca and eShun.

In 2019, the concert witnessed for the first time two-foreign African music greats as part of the Headliners – Awilo Longomba and 2Face also known publicly as 2Baba.

Related Topics:amakye dede
Up Next

Larruso revisits his dark days on his LP, “Sounds from the Slums”

Ghanaian Reggae and Dancehall artist, Stonebwoy has been captured in a studio with American singer, Jordin Sparks following their recent meeting in Los Angeles. END_OF_DOCUMENT_TOKEN_TO_BE_REPLACED

A Lagos State High Court, Southwest Nigeria has awarded N5m damages against a singer, Ikuforijimi Abdulrahman, aka Oxlade, over a leaked explicit sex tape with a woman on a social media app, Snapchat. END_OF_DOCUMENT_TOKEN_TO_BE_REPLACED

Ghanaian rapper, Kwaw Kese has recounted his contribution to the success of Stonebwoy’s career. END_OF_DOCUMENT_TOKEN_TO_BE_REPLACED

Ghanaian Afropop and R&b singer, Camidoh has stated that he dropped an EP instead of an album to further solidify his brand some more. END_OF_DOCUMENT_TOKEN_TO_BE_REPLACED

Ghanaian Radio/Television Personality, Deloris Frimpong Manso, popularly known as Delay, has revealed that she has been blocked on Twitter by her colleague Abeiku Santaana. END_OF_DOCUMENT_TOKEN_TO_BE_REPLACED