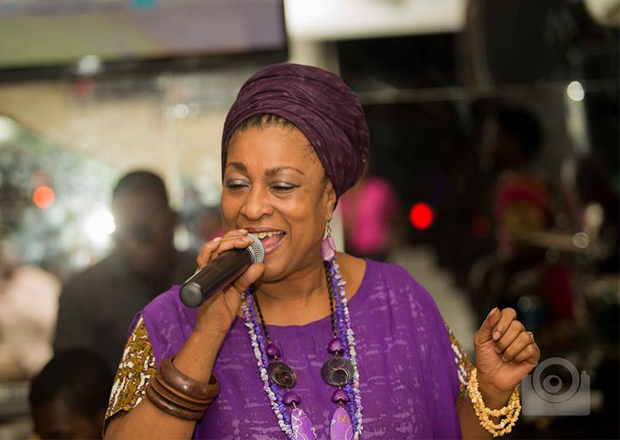 Ghanaian actress and singer Paulina Oduro has reacted to rumours that she might be lesbian.

Paulina Oduro appeared on the Delay show and the host, in her usual style, decided to drive a conversation into her sex life and she confidently faced her with straightforward and bold replies to her questions which also came unprintable words on the show.
In a trailer to the yet to be televised interview, the 60-year-old disclosed that she hasn’t been in a relationship with any man in the past ten years and never has she had any sexual encounter with a man for about eight years now. When asked how she copes with this, she said she’s too old to think about such things.
At the back of this conversation, Delay asked her if the rationale behind her celibacy could be related to the rumours that she is a lesbian, the “Sasankroma” singer replied “what reason would make someone say something so”.
Hitting the nail on the head, Delay then asked her if she is a lesbian and she said: “ stupidness, I’ve said it, it’s foolishness, anyone who thinks that about me is an idiot. God created Adam and Eve not Eve and Eve”

Watch the teaser of the interview below.

Related Topics:Paulina Oduro
Up Next

Ghanaian actor and entrepreneur, John Dumelo has requested for the funds set aside for the Black Stars, had they qualified to the round of 16 in the FIFA 2022 World Cup, to be used to purchase desks for school kids. END_OF_DOCUMENT_TOKEN_TO_BE_REPLACED

END_OF_DOCUMENT_TOKEN_TO_BE_REPLACED

Accra’s biggest and only photo festival, “Wondaland” is back; this time bigger and better. END_OF_DOCUMENT_TOKEN_TO_BE_REPLACED