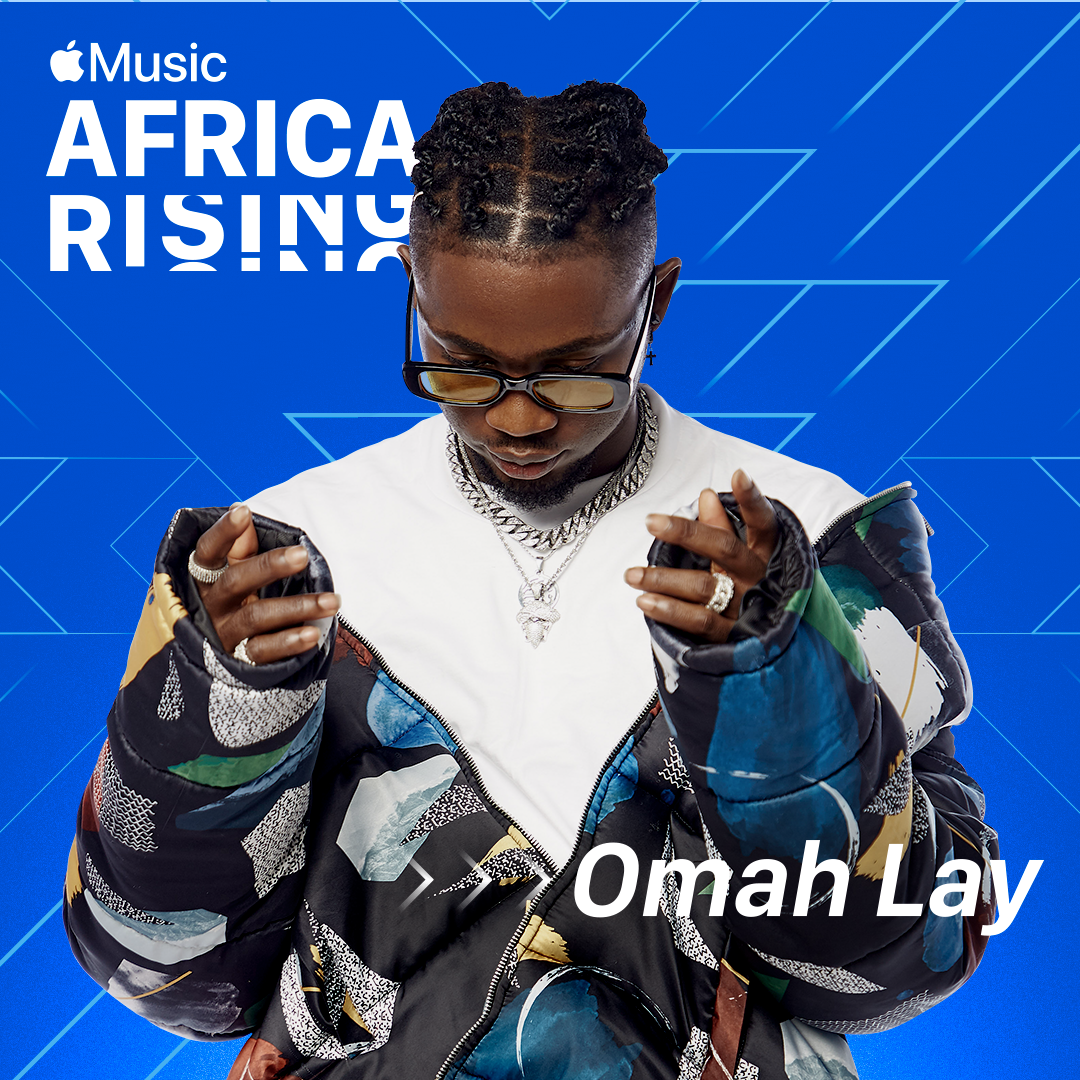 “I have always used Apple Music, seeing my favorite artists on playlist covers and features but here I am looking pretty as Apple Music’s first Africa Rising artist. I am overwhelmed, dreams really do come true”
Every two months, Africa Rising will feature an artist selected by Apple Music’s editorial team on the continent and use the full force of the platform to amplify them to music fans in Africa and around the world. The program also includes a companion playlist featuring the Africa Rising cover star plus the continent’s hottest new and emerging artists across all genres.
“I’m so excited that my fellow Nigerian Omah Lay is Apple Music’s first Africa Rising artist,” said Cuppy, host of Apple Music’s Africa Now Radio. “This new program and its playlist will elevate the next generation of African superstars and bring them to the world.”
Omah’s musical journey started during his teenage years as a member of the rap group, Lil King. A few years later he swapped performing for producing, quickly becoming Port Harcourt’s go-to guy for a hit single, but he picked up the mic again when he realised he could use his newfound skills to advance his own career.
In 2019 he released two singles “Do Not Disturb” and “Hello Brother”, both of which ended up on heavy rotation on Port Harcourt’s commercial stations, securing him a growing fanbase with each new milestone.
With a musical arsenal that draws from Afrobeats, R&B and pop, Omah’s debut EP Get Layd, which he released under indie record label KeyQaad, has been the #1 album on Apple Music Nigeria since its release in May 2020, with all 5 songs from the EP featuring on the Nigerian Top 10 singles chart.
About the success of his first project as a solo artist, Omah Lay says in an interview with Nadeska Alexis airing this Friday on Apple Music: “I wasn’t expecting all of this. I didn’t expect it to happen this fast and so soon, you know what I mean? But I’m grateful. I just made music, I put it out, and everybody’s loving it.”
Listen to Omah Lay’s latest Apple Music interview with Nadeska Alexis at apple.co/_NadeskaAlexis
The latest music from Omah Lay, along with that of his Africa Rising peers, is available now on the Apple Music Africa Rising Playlist HERE.
Africa Rising is Apple Music’s latest of many initiatives aiming to promote African talent. Now available in 33 countries in Sub-Saharan Africa, the platform recently launched its new show Africa Now Radio with Cuppy and a series of ‘At Home With’ playlists exclusively curated by top African artists including Simi, Fireboy DML, Sun El-Musician, Master KG and more. Last month Shazam launched the Mzansi Risers playlist in South Africa.
Apple Music also selected Nigerian Afropop star Rema as its latest Up Next artist, following the addition of Burna Boy to the roster last year and Mr Eazi back in 2017. Up Next is Apple Music’s global emerging artist program.
Omah Lay Tells Apple Music About the Success of His First Project as a Solo Artist

“I wasn’t expecting all of this. I didn’t expect it to happen this fast and so soon, you know what I mean? But I’m grateful. I just made music, I put it out, and everybody’s loving it. And I’m really grateful.”

“I was a music producer and about a year ago I put out a few of my songs, a few songs that I made for myself, ‘Do Not Disturb’ and ‘Hello Brother.’ And then I got a deal, I had to move down to Lagos from my city. And I made ‘Get Layd’ and where I’m at today. And I’m grateful again.”

“Maybe I wasn’t confident enough but I didn’t know that I could be this guy right now. I didn’t know that people would enjoy my music this much. So I felt more comfortable just staying in the studio and making music for other people, but the time I tried with ‘Do Not Disturb,’ I put out my first song, ‘Do Not Disturb,’ and the reception was really amazing, so I had to run with it, and I put out ‘Hello Brother,’ and yeah. I grew more confident, and I started making more music, and I got my deal with KeyQaad.”

“You know, growing up and always being with my dad, he played a lot of highlife music, and growing up listening to Drake a lot, with time I just started making beats. You know, I started rapping, and I wanted to be so much like Drake, when I was really young, I just wanted to be Drake.”

“I was just a rapper. I was a rapper then I decided to enhance my music skill by becoming a music producer. I stopped rapping and, yeah, I was a music producer for a long time, for about four or five years, I was just making beats for people and writing songs for other people. So just about last year, I decided to take it up professionally.”

“While I was working on the ‘Get Layd’ project, I actually stayed away from my social media follow and I stayed away from a lot of things. I was just trying to get my head straight so I can get my message right, you know? While I was working on the ‘Get Layd’ project, I decided to just do something for my Instagram followers, and at that time I had just 1,500 Instagram followers, you know? So I had decided to make something for them to just listen to while I am off. So I made ‘Bad Influence,’ and everybody was like, ‘Yo, we need the full version of the song. This song is something else.’ And I went back and I completed it, and it is what it is today. It wasn’t even supposed to be on the ‘Get Layd’ EP, you know? But people request that for the song a lot, that we just had to put it on the EP.”

“ ‘You’ was like my first official single. I and my team, we wanted to put out a single before the ‘Get Layd’ project, so I had three versions of ‘You.’ I really don’t know how everything happened, but it happened so fast that, and ‘You’ is there right now. I don’t know why. I don’t even know what to say about the song (laughs)”

“When I had the ‘You’ beat, I had the beat and the beat was superb, you know? I dive straight in. I started making the records. I made the first version and second version, and ‘You’ was the last version. This is usually how my process is. I try to make three different songs with the same beat.”

Omah Lay Tells Apple Music About Self-Criticism as a Producer

“Being a producer, I’ve heard so much. I’ve listened to a lot of songs, and I always want mine to sound the best, so every time I make a record, I’m always doubting it. But at the end, you know, everybody around me is enjoying it, and I’m a bit of a perfectionist and it’s really affecting my craft. But I think it is just like you said, it’s a gift and a curse at the same time. That was the same thing with the whole ‘Get Layd’ EP. I didn’t like any song from that EP apart from ‘Bad Influence’. I didn’t like any of the songs. I felt like there was a lot of songs in the trash that was better than the songs on the EP, but my whole team and everybody, in fact, my parents, my brothers, everybody thinks these ones are good enough to be in the project, so I just give it up for them.”

BBC World Service launches ‘The Comb’, a new podcast for audiences in Africa