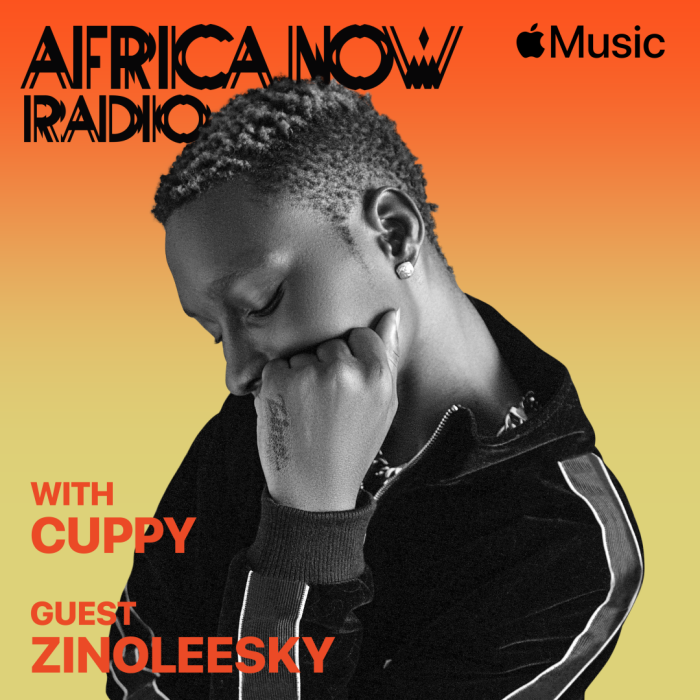 This Week’s Episode Features a Conversation With Zinoleesky, the 5 Hottest Tracks of the Week, and Candice Modiselle’s Favorite African Proverb!

Tune in to Africa Now Radio With Cuppy This Sunday, January 17th at 2p Lagos/London / 3p Johannesburg/Paris / 6a LA / 9a NYC Only on Apple Music 1 and broadcast on Cool FM in Nigeria every Sunday at 6pm

Cover Star Interview
Nigerian artist Zinoleesky is this week’s cover star and joins Cuppy via FaceTime on Apple Music 1 to talk about his debut EP ‘Chrome.’ Zinoleesky tells Cuppy about being from Agege, Lagos – home to arguably the best bread in Nigeria, learning from Naira Marley, and the concept behind the “Kilofeshe” music video.

Africa Rising
Cameroonian DJ and producer Jeune Lio is the latest Africa Rising cover star, a campaign which shines a light on the next generation of African superstars. https://apple.co/32v7zX4

Tune in and listen to the full episode this Sunday, January 17th at 2p Lagos/London / 3p Johannesburg/Paris / 6a LA / 9a NYC on Apple Music 1 at apple.co/_AfricaNow or on Cool FM in Nigeria every Sunday at 6pm.

Candice Modiselle’s proverb of the week

Zinoleesky on what inspired debut EP ‘Chrome’ and its visuals

Zinoleesky: “There’s a car in the game that has this chrome color I like. I was in love with that car.”

Zinoleesky on being signed to Naira Marley’s label, Marlian Records

“Being signed to Marlian Music is, trust me, an experience like no other. Because Naira Marley doesn’t take us an artist, this is like his brother, or his brother like his family. So, you know it’s a family thing, he’s a very intellectual person that looks at all angles, spiritually every angle left, morally. I think I’m in a perfect place, perfect place, and I’m very happy I made that decision.”

Related Topics:Africa Now Radio
Up Next

Listen UP: Eugy teams up with Chop Daily to release ‘Plenty Pepper’