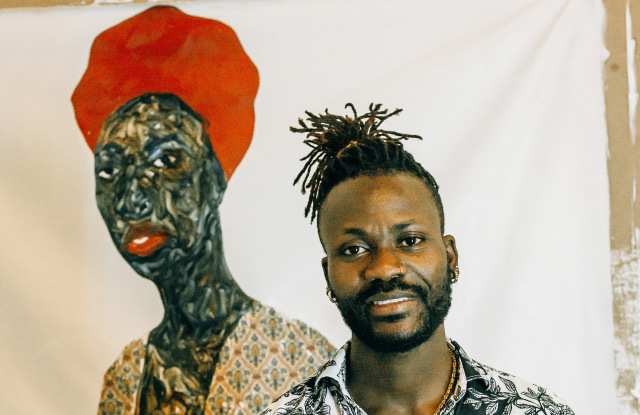 Just few days after luxury brand,  Dior was criticised for casting an all-white ensemble of models for its womenswear couture presentation, the artistic director of menswear, Kim Jones, has featured only black models in his spring/summer 2021 collection, which was designed in collaboration with the acclaimed Ghanaian portrait painter Amoako Boafo.

The collection, titled Portrait of an Artist, was shown as a two-part presentation that began with one film shot in London and at Boafo’s studio in Ghana by video artist Chris Cunningham, and a second, showcasing the clothes, which was filmed in a catwalk-like setting to a Max Richter soundtrack.

The creation of the #DiorSummer21 men’s collection in collaboration with Ghanaian artist @AmoakoBoafo began following our meeting in Miami in 2019. Stay tuned to discover the collection live in the form of an exclusive film edited and soundtracked by the video artist Chris Cunningham on Dior.com and Instagram Story on Monday, July 13 at 2:30pm CET.

Jones was inspired by Boafo’s Black Diaspora series, which explores his identity and black masculinity. The artist’s influence was ubiquitous, with Jones transposing the works on to clothes, in some cases hand-painting the portraits on to coats and knitwear or simply borrowing from the print or mood of a portrait.

Boafo was born in Accra, Ghana, and currently based in Vienna, Austria. He creates highly intimate portraits rendered in deeply textured paint and a rich color palette. The resulting paintings are sincere portrayals of friends and peers from Ghana, Vienna, and many places in between.

His powerful, concise style expresses the vibrancy of daily life with an easy familiarity, touching on topics such as community, social and political struggles, and the intimacy between like-minded friends.

“The primary idea of my practice is representation, documenting, celebrating and showing new ways to approach blackness,” shares Boafo.

A lot of his work is inspired by his upbringing, commenting on how males are raised to be aggressive and masculine, which he challenges in his works. Although the artists underlying messages are quite intense, there is a certain softness to the works as a whole, the poses are serene and the skin luminous.

In 2017 was awarded with the jury prize, Walter Koschatzky Art Prize. Widely collected by private and public collectors and institutions, most recently by CCS Bard College Hessel Museum of Art,  The Albertina Museum Vienna, and the Rubell Museum.