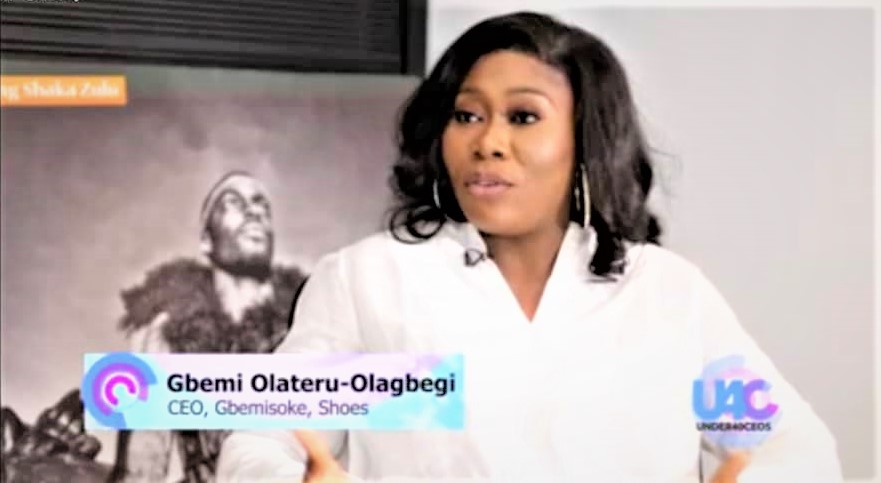 Gbemi was born as a Princess of the Olagbegi family in Owo, a city in Ondo State, SouthWestern Nigeria.

She attended Pampers private school, Surulere, and Nigerian Navy Secondary School, Ojo. She also attended Queens college, Yaba before she proceeded to Oakland University, where she received a bachelor’s degree in Mass Communication.
Gbemi would later obtain a master’s degree in Media and Communication from Pan African University, Lagos State in 2009. Sheis a Nigerian broadcaster and presenter known for presenting programmes on Cool FM and The Beat FM.
Whilst trying to solve a personal problem involving finding nice shoes for big-footed ladies, Gbemi found herself in the fashion industry.

Gbemi Olateru-Olagbegi is the CEO of Gbemisoke Shoes.
Watch the full episode on Under 40 CEOs below:
Part 1

About Under 40 CEOs on Television
The acclaimed television show Under 40 CEOs launched on TVC Entertainment and TVC News on the 9th of October, 2015 and subsequently launched on Silverbird Television Network on the 13th of January, 2016 and has spotlighted inspiring young business leaders aged 40 and under from East, West and South Africa. In addition to the channels above, the series has also aired on or currently running on Africa Magic Family, DBS, ITV Benin, ITV Abuja, RSTV and GHOne reaching a cumulative average viewership of 2.2million people every week.
Under 40 CEOs seeks to research, celebrate and expose the business leaders of the not-so-distant future and tell the stories of these young business leaders in Africa with a focus on the journey, the process and their proposed destination.
With over 100 episodes recorded till date, and serial entrepreneur, Familusi Akin Babajide, Mr FAB as the host, Under 40 CEOs has since gone on to inspire and motivate millions of would-be young business leaders across Africa to take action and join in the rebuilding and re-shaping of the African continent.
Under 40 CEOs currently has a social media following of over 300,000 and growing with a cumulative social media content reach of over 14.3million.

Related Topics:Gbemi Olateru-Olagbegi
Up Next