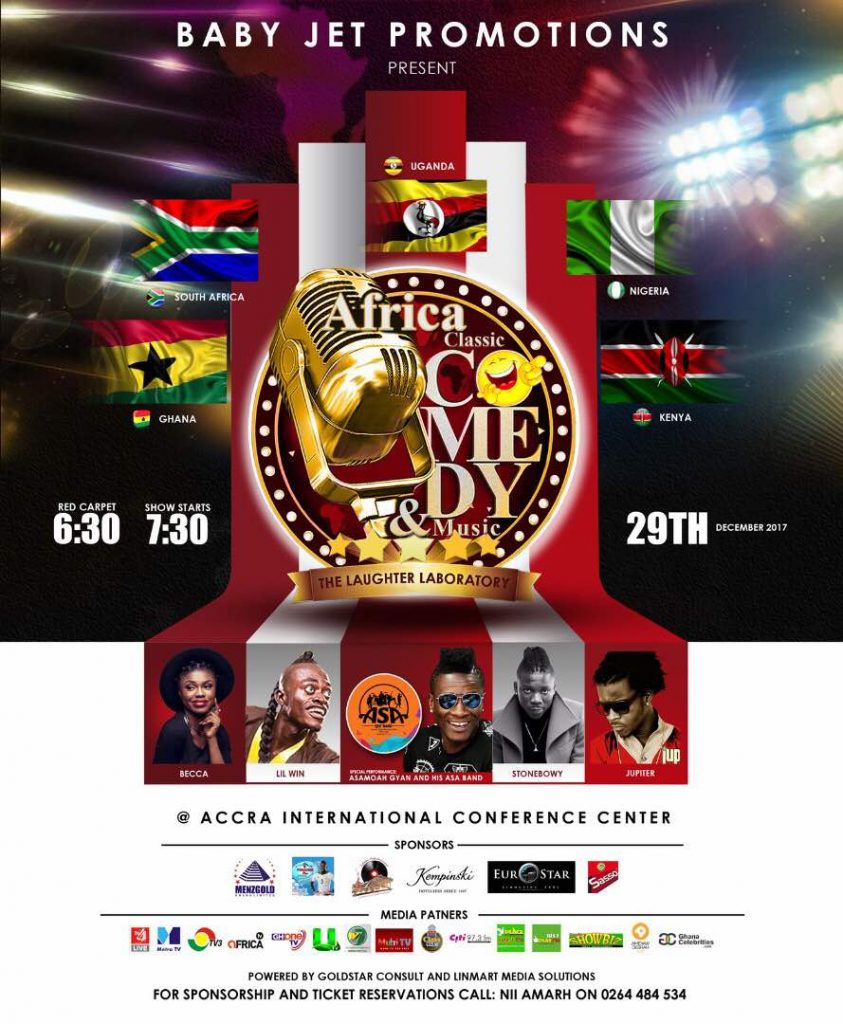 The biggest comedy show in Africa is finally here in Ghana with the most entertaining comedians Africa has ever produced. Is the show with Africa’s undisputed King of Comedy, Africa’s Queen, the King of Gh Comedy and a host of impressive comedians and musicians set to thrill Ghanaians at the maiden edition of AFRICA CLASSIC COMEDY AND MUSIC SHOW…Your Laughter Laboratory which will be hosted by Dr. Asamoah Gyan on Friday, 29th December at Accra International Conference Center. The comedians will be drawn from KENYA, SOUTH AFRICA, UGANDA, NIGERIA and Ghana. Also on the bill will be a one and only lawyer from Kejetia and a controversial comedian. It will be a night of rib cracking, thrilling, unlimited ecstasy of laughter and soothing authentic music to celebrate a successful year. Baby Jet Promotions is bringing together the finest African comedians to one place to entreat patrons with classic comedy and to harmonize and foster good relationships among them. The names of all the comedians and one international musician will be unveiled at news conference on Wednesday 13th December, 2017 at Kempinski Hotel at exactly 11:00am. The question on the lips of many Ghanainas is; Who wins the day and who will be crowned the best comedian in Africa? Your guess is as good as mine. The comedy event, which will kickstsart with a red carpet will see some of the country’s best musicians take the stage to make the Christmas celebrations a memorable one. Musicians on the bill are Dr. Asamoh Gyan (captain of the Black Stars), and his ASA Band, the sensational Becca, The Commander of the BHIM Nation, Stonebowy, The General…Jupita, Lil wayne, A Plus, Obrafour and many more. The guest of honor will be HE Dr. & Mrs. Bawumaih and host of Black Stars players. Baby Jet Promotions, the event organizers have hinted that this comedy event will   be one of the simplest psychological techniques for rapid stress relief involves finding ways to distract yourself from whatever it is that is bothering you and to usher patrons into the new year with laughter and joy. Tickets will be selling for VVIP Gh₵300.00, VIP GH₵200.00 and Regular 100 The show is powered by GoldStar Consult and Linmart Media Solutions]]>

“I no dey fight anybody o,” says Davido after winning The Future Awards Musician of the Year