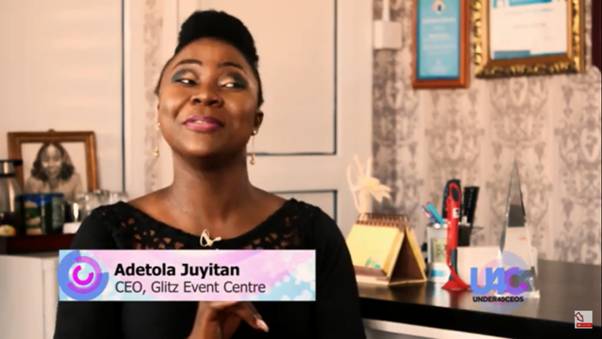 Adetola Juyitan is an entrepreneur, ex-banker and former national president of Junior Chamber International (JCI). She is a graduate of accounting from the Ekiti State University and bagged an MBA from Lincoln University, she is a recipient of several awards and has spoken at several national and international events.

Adetola worked at different firms across myriad of sectors and organisations including Bonne Santè Health Services Limited, Abayomi Ogunjimi & Co. (Chartered Accountants), Betcy Group amongst others.
She joined Zenith Bank PLC’s sales and marketing unit as a Youth Corper and was retained afterwards till April 2007 when she left to join Kuramo Group (Metro Urban Homes Limited & Hope Building Society Mortgage Bank) but Zenith Bank recalled her seven months later.
In September 2013, she would move to United Bank for Africa (UBA) PLC as the Business Manager of one of the Bank’s “Triple-A-rated” business offices before she left to launch Glitz Occasions Nigeria Limited.
The birth of the Glitz Event Centre in Lagos Nigeria is the culmination of her career aspirations. Sitting on two acres of land, Glitz Event Centre features two marquees which can host two events simultaneously.
Adetola Juyitan is the CEO of Glitz Event Centre.
Watch episode below: