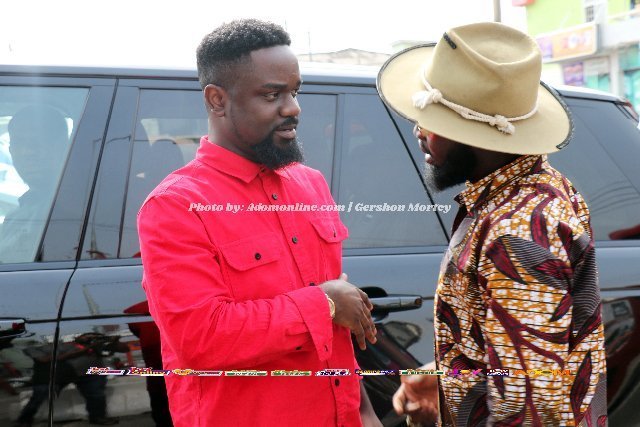 manifest x sark[/caption] It looks like the famous 2016 “beef” between rappers Sarkodie and Manifest may have ended as the two were spotted shaking hands and exchanging pleasantaries inside Multimedia’s car park this morning. Coincidentally, the two were both at the premises of Multimedia for different interviews,  M.anifest had just finished an interview on Hitz FM while Sarkodie was also waiting in his car for an interview on Joy FM. One may not understand why this meeting is so significant, if you remember, in 2016, M.anifest, in his ‘godMC’ track, went after Sarkodie after he released his “Bossy” song. Sarkodie was quick  to respond to M.anifest in his “Kanta” track. https://ameyawdebrah.com/music-video-manifest-ft-kwesi-arthur-feels/ Their beef trended on social media for a while and Manifest was voted the winner. The two have since stayed out of each other’s way as we haven’t seen them together anywhere. So it was definitely a sight to see after the two were captured exchanging pleasantries with a little chit-chat at the car park of Multimedia. https://ameyawdebrah.com/music-video-sarkodie-biibi-ba-ft-lj-tulenkey-frequency-k-mole-toyboi-yeyo-amerado-2fyngers-obkay-cj Asking for a new collaboration may seem too soon, but who knows, Sarkodie and M.anifest may just surprise us all. Until then, we’ll keep this photo dear to our hearts.

Christian Atsu pays for the freedom of 10 Prisoners, will free 40 more

Viola Davis makes a stunning transformation in the new trailer for ‘The Woman King’, in which she plays Nanisca, leader of the all-female warriors known as the Agojie. END_OF_DOCUMENT_TOKEN_TO_BE_REPLACED

African-American businessman and jet broker Kelvin Mensah, popularly known as PJKev has added his voice to the many people against the building of the National Cathedral. END_OF_DOCUMENT_TOKEN_TO_BE_REPLACED

Nigerian hip-hop artiste, Eedris Abdulkareem has disclosed that he is battling kidney failure and will have a surgical operation at the end of July. END_OF_DOCUMENT_TOKEN_TO_BE_REPLACED

According to reports from Nigeria, unidentified gunmen have attacked an ‘advance team’ of President Buhari’s presidential aides leading to injuries to two people. END_OF_DOCUMENT_TOKEN_TO_BE_REPLACED

Sensational highlife/afrobeat artist KiDi has said that his dream is to collaborate with Daddy Lumba on a song. END_OF_DOCUMENT_TOKEN_TO_BE_REPLACED