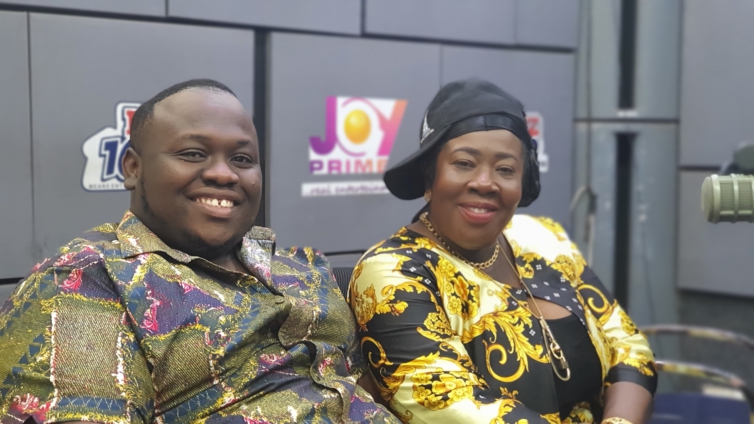 Ivy Enyonam Adjimah popularly known as Big Ivy has announced her plan to release an EP titled “Mummy’s Love”.
According to Big Ivy’s son, Christian Jojo Joshua known in showbiz as CJ Biggerman, the EP will focus on the influence of having a loving and caring mother who is available on good and bad days.

“We have an EP together, mummy’s love, five songs, so it is actually a storyline extended play, so it is following a path of the influence of having a loving mother in your life listening to you when you bring all the troubles she still supports you.” He added that they will also be airing a web series “flow series” soon.

“We also have an amazing series that will be airing soon the flow series, a web series, we have been working on a lot.”

The date for the EP and flow series is yet to be announced.

Big Ivy encouraged talents in the entertainment industry to pursue education first, according to her it will be useful in the future when their talent is unrecognized.

“Look at me I have done my masters but I can rap, there are a lot of the youth out there, who just follow their passion and then discard what they are doing, my belief is to have two options or three options so that, if one does not work you move onto the other one, if you do that no one will take you for granted, no one will cheat you”, she stated.
Speaking on her journey in the entertainment industry, Big Ivy said she has been in the movie industry for twenty years and was part of the YOLO  series but two months into her music career, she is famous on social media.

Related Topics:Big Ivy
Up Next

The voting portal for the 2022 edition of the All Africa Music Awards (AFRIMA) opened to the public on Sunday, 25 September at 21:00 (CAT), to decide the winners of each of the 39 award categories, globally. END_OF_DOCUMENT_TOKEN_TO_BE_REPLACED

Ghanaian actress, Yvonne Nelson has issued an apology on behalf of Ghanaians to Stephen Appiah and his Black Stars colleagues. END_OF_DOCUMENT_TOKEN_TO_BE_REPLACED

Professor Elsie A. B. Effah Kaufmann, host of the popular National Science and Maths Quiz has shared a bit of her private life. END_OF_DOCUMENT_TOKEN_TO_BE_REPLACED

As the only Ghanaian female artist to perform on the Global Citizen Festival stage at the Black Star Square last night, Gyakie did an incredible job representing the country and doing her part in being a contributing voice for global change. END_OF_DOCUMENT_TOKEN_TO_BE_REPLACED

Although Ghanaians appreciate Professor Elsie A. B. Effah Kaufmann as the Quiz Mistress of the popular National Science and Maths Quiz, there are other things that they love about her. END_OF_DOCUMENT_TOKEN_TO_BE_REPLACED