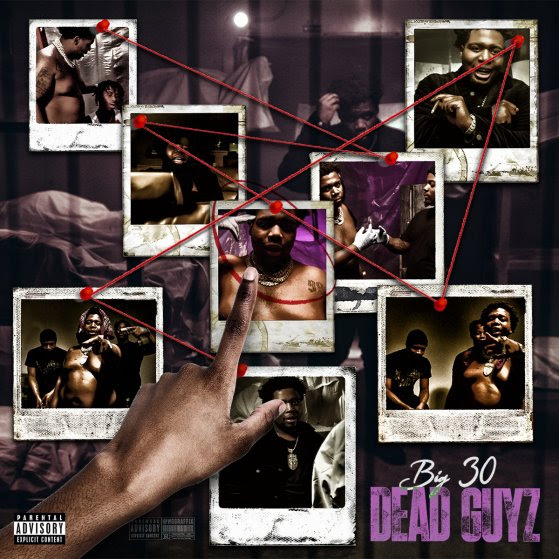 Today, BIG30 makes his triumphant return with thrilling new single “Dead Guyz”. The dynamic blend of technical skill and steely intensity with which Big30 delivers his bars on this record are a showcase of the power and skill that catapulted the young rapper to success over the past year. This release arrives on the heels of Big30’s inclusion in XXL’s Freshman Class of 2022, which was announced via social media earlier this week (see the cover HERE). It also kicks off an exciting summer for the young talent as he prepares to release his sophomore effort in the coming months.

“Dead Guyz” is one of the first releases since Big30’s acclaimed debut mixtape King of Killbranch. The 15-track project, which released last fall, marked BIG30’s most ambitious effort to date. The project solidified him as one of the strongest newcomers of the past year and began his journey to rap dominance. It also landed him the spot of Rolling Stone’s breakthrough artist of the month for September following the release.

Prior to the project, he kicked off 2021 with a celebrated feature on Pooh Shiesty’s RIAA Gold-certified “Neighbors,” which peaked at #51 on the Billboard Hot 100. From there, he completed a trap artist rite of passage by appearing on Gucci Mane’s “Shit Crazy,” garnering the attention of Complex, Vulture, and other tastemaking outlets in the process. With several standout singles and his debut project at his back, BIG30 is set to make the most of his moment, which is starting to look like it will last a very long time.

Armed with a blistering delivery, menacing lyrics, and bullet-riddled memories from the Memphis streets, BIG30 – the 21-year-old rapper to watch – unloads casual threats and bleak aphorisms with a concussive force that’s beginning to reverberate through the industry. His verse on Pooh Shiesty’s 2021 single “Neighbors” was the shot heard ’round the world, giving 30 his first RIAA Gold certification without even releasing his own project.

By the time the duo recorded “Neighbors,” more than two years after they started writing tracks together, BIG30 had refined his flow, and arrived more confident than ever. That song peaked at No. 51 on the Billboard Hot 100 chart and contributed to the now 116M+ global streams that 30 can claim. Until then, 30 had been watching YouTube views and Facebook shares, not RIAA-certifications, especially since he wasn’t sure if the public was ready for the raw content of his bars. Now, as he takes advice from people like 50 Cent and records with the idols he grew up listening to, 30, the father of two children (with another on the way) plans to one day have his own record label and millions to his name. After signing to N-Less / Bread Gang Entertainment, he has the chance to reach the potential his label boss saw in him right away. His debut mixtape, King of Killbranch released to widespread acclaim and landed him the spot of Rolling Stone’s biggest breakthrough artist in the month of September following the release. Now, fresh off the momentum of his inclusion in XXL’s Freshman Class of 2022, he is on track to release his sophomore effort later this year.

Atlanta rapper and Grammy nominated artist JID has announced the release date of his highly anticipated album, The Forever Story on Dreamville/Interscope Records. Fans who have been patiently awaiting The Forever Story can now pre-order/save the project here: https://JID.lnk.to/TheForeverStory. END_OF_DOCUMENT_TOKEN_TO_BE_REPLACED

END_OF_DOCUMENT_TOKEN_TO_BE_REPLACED

“What do celebrities & influential leaders believe in?” As you know, celebrities and influential leaders are role models for young and old generations, and they can influence society and impact the world negatively and positively. Spiritual leader and multi-award-winning life coach Asim Aliloski has seen that successful people on top of their game have been searching for a higher power. END_OF_DOCUMENT_TOKEN_TO_BE_REPLACED

American rapper, Kanye West has reacted to the news of the end of the relationship between his ex-wife Kim Kardashian and Pete Davidson. END_OF_DOCUMENT_TOKEN_TO_BE_REPLACED

Prosecutors are reportedly asking the federal court to seize about $28K from R Kelly’s prison-inmate account since he has $140,000 in court-ordered fines. END_OF_DOCUMENT_TOKEN_TO_BE_REPLACED

Elon Musk has accused the social media platform, Twitter, of fraudulently holding back information about the company as part of a countersuit. END_OF_DOCUMENT_TOKEN_TO_BE_REPLACED