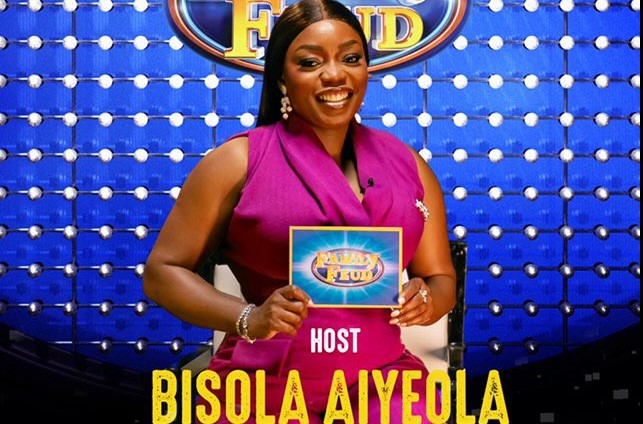 Nollywood actress and reality star, Bisola Aiyeola has bagged a mouth-watering deal as she becomes the first black female host of the Family Feud Show.

MTN Nigeria in partnership with Ultima announced actress and reality star Bisola Aiyeola as the host of the hit show, Family Feud in Nigeria. The announcement was made at a press conference at the MTN headquarters in Lagos on Wednesday.

Speaking at the unveiling, Bisola Aiyeola expresses gratitude to the lead partners for the opportunity to host the show.

She said: “I am so grateful, excited audition rehearsals meeting families. I cannot wait for the rest of the world to see this.”

The actress while announcing the good news on Twitter wrote:

“Ladies and Gentlemen, your Host Bisola Aiyeola. I am so excited for this @familyfeudnigeria journey with @ultima_groupng and @mtnng seeing as we started out years ago with Project Fame west Africa.”

Family Feud is an American television game show created by Mark Goodson. It features two families who compete to name the most popular answers to survey questions in order to win cash and prizes

Related Topics:Bisola Aiyeola
Up Next

The voting portal for the 2022 edition of the All Africa Music Awards (AFRIMA) opened to the public on Sunday, 25 September at 21:00 (CAT), to decide the winners of each of the 39 award categories, globally. END_OF_DOCUMENT_TOKEN_TO_BE_REPLACED

Ghanaian actress, Yvonne Nelson has issued an apology on behalf of Ghanaians to Stephen Appiah and his Black Stars colleagues. END_OF_DOCUMENT_TOKEN_TO_BE_REPLACED

Professor Elsie A. B. Effah Kaufmann, host of the popular National Science and Maths Quiz has shared a bit of her private life. END_OF_DOCUMENT_TOKEN_TO_BE_REPLACED

As the only Ghanaian female artist to perform on the Global Citizen Festival stage at the Black Star Square last night, Gyakie did an incredible job representing the country and doing her part in being a contributing voice for global change. END_OF_DOCUMENT_TOKEN_TO_BE_REPLACED

Although Ghanaians appreciate Professor Elsie A. B. Effah Kaufmann as the Quiz Mistress of the popular National Science and Maths Quiz, there are other things that they love about her. END_OF_DOCUMENT_TOKEN_TO_BE_REPLACED