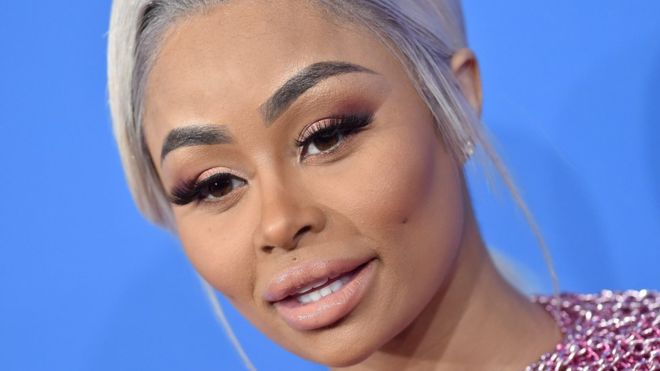 Blac Chyna is being criticised for selling a skin-lightening cream in Nigeria[/caption] The model’s new product, in partnership with a brand called ‘Whitenicious’, was announced on Instagram. The Whitenicious x Blac Chyna Collection is described as an “illuminating and brightening cream” that “lightens without bleaching skin out”. In an interview with Ebony at the time, she was quoted as saying: “Will Whitenicious bleach your skin if you use it on all your skin? Yes, it will. Are we selling Whitenicous for that purpose? No, we’re not.” The company says its cream is meant to be used for conditions like hyper-pigmentation, when people have dark spots on their skin. But that hasn’t stopped a backlash against Blac Chyna, who rose to fame stripping and modelling, before launching a make-up brand and having a child with Rob Kardashian. Despite some people using skin-lightening products as a cosmetic procedure to change the appearance of blemishes like birth marks, they have a bad reputation the world over due to the harmful ingredients that some can contain.

The NHS says that “powerful skin-lightening creams” can be prescribed by a doctor, usually containing hydroquinone and/or corticosteroids, a steroid medication. But products containing those ingredients which haven’t been prescribed by a medical professional are banned in the UK. A UK man was jailed for selling toxic skin-lightening products earlier this year, the first time that’s happened. Blac Chyna’s product doesn’t contain any of those ingredients, but she’s been accused of “exploiting” Nigeria’s colourism problem. Colourism is prejudice against people who have a darker skin tone, and/or the preferential treatment of those who are of the same race but lighter-skinned. Many skin-lightening products are not banned in Nigeria, where 77% of women are reported to use some form of them on a regular basis according to the World Health Organisation. Blac Chyna disabled comments on her Instagram post but that hasn’t stopped people writing on her other pictures. “Bye White Chyna,” one person wrote. People have been critical of the model’s latest business venture elsewhere as well. Newsbeat has contacted representatives of Blac Chyna but hasn’t yet received a response.   https://www.instagram.com/p/BqYl0J_A2aZ/?utm_source=ig_web_copy_link           SOURCE : bbc.com]]>
Related Topics:
Up Next

Moroccan woman in UAE 'killed lover and cooked him'

Videos have emerged of the moment a Russian ice hockey star who signed a million-dollar contract with an American team was rounded up by Russian policemen and taken to an army enlistment office before he is sent to fight in the war in Ukraine. END_OF_DOCUMENT_TOKEN_TO_BE_REPLACED

A woman who flashed a gun before attempting to make her way into Diddy’s BET after-party was arrested outside the mogul’s house. END_OF_DOCUMENT_TOKEN_TO_BE_REPLACED

Andy Goram has died at the age of 58 after a short battle with cancer. END_OF_DOCUMENT_TOKEN_TO_BE_REPLACED

A woman who went viral 2 years ago for marrying the man who caught the garter after she caught the bouquet at their friends’ wedding, has shared an update on their marriage. END_OF_DOCUMENT_TOKEN_TO_BE_REPLACED

Liverpool star, Mohamed Salah has committed his future by signing the biggest deal in the club’s history. END_OF_DOCUMENT_TOKEN_TO_BE_REPLACED