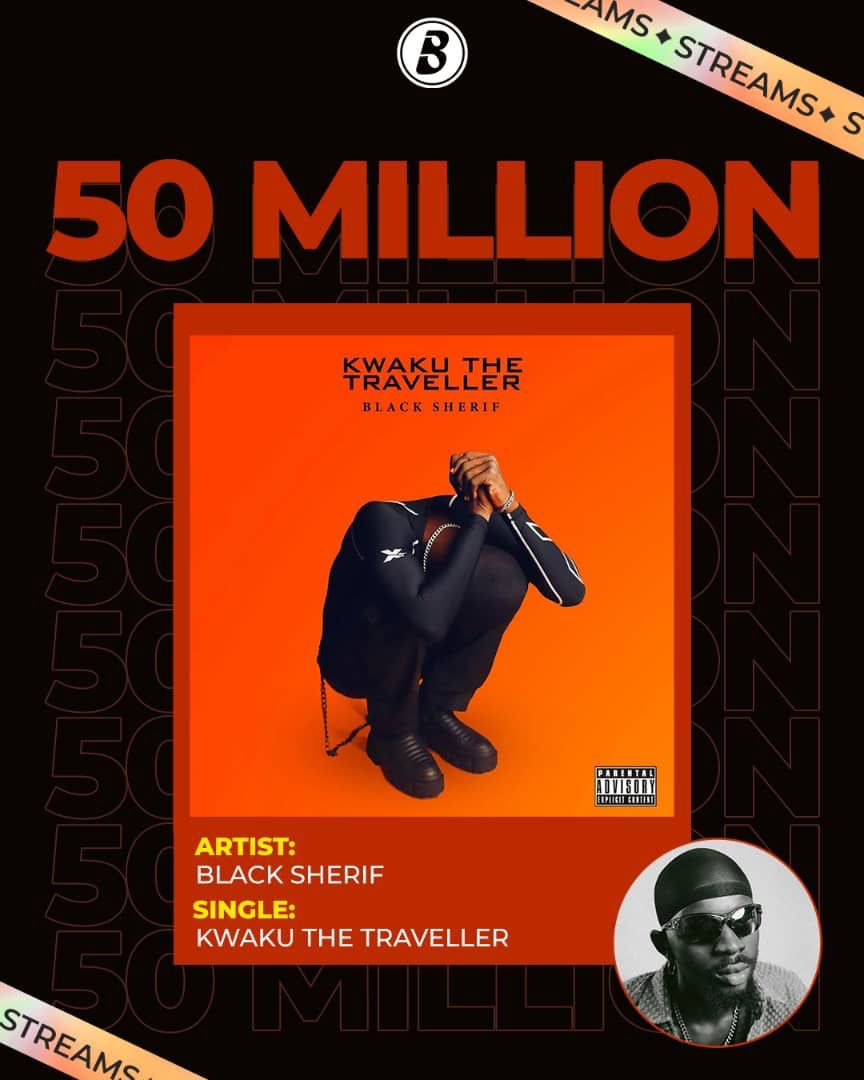 Black Sherif has hit 100M streams on Africa’s most expansive music streaming and download platform, Boomplay. The “Kweku the Traveller” hitmaker becomes the first Ghanaian artist to reach the 100M streams milestone on Boomplay after having had a phenomenal run since last year.

“Reaching 100 million streams on Boomplay in such a short time and being the first Ghanaian artist to achieve this feat is a big deal to me. As a young kid from Konongo, who only had a dream and a voice, this brings me to the realisation that I can achieve any and everything so long as I believe and dare myself to take action.  Big love to the Boomplay team for putting me on from day one till now,” Black Sherif shared.

Born Mohammed Ismail Sherif, the 20-year-old talented artist released “Money”, “Cry For Me”, and “Destiny” in 2020, which gained him some traction online. Later, he dropped “Money (remix)”, “Adea Kye”, and “Ankonam” and garnered huge buzz on Boomplay across several countries.

When Black Sherif’s “First Sermon” and “Second Sermon” were released in 2021, they went viral and brought him to the mainstream limelight.  A remix of his “Second Sermon” featuring Burna Boy gave him further reach across Africa and beyond. Consequently, during Boomplay’s Recap 2021, which highlights stats and insights of music consumption and engagement on the Boomplay platform, Blacko emerged as Ghana’s 2nd Most Streamed Artist of 2021 and his “First Sermon” and “Second Sermon” were the 1st and 2nd Most Streamed Songs of 2021 in Ghana.

His story written in bright stars, Black Sherif, went on to win the four awards at the 2022 3Music Awards, held in March 2022, including the Boomplay Breakthrough Act of the Year. At the same event, he debuted a spectacular performance of his latest single, “Kwaku the Traveller”. The song skyrocketed him to African stardom and peaked at NO.1 on both Boomplay Ghana and Nigeria charts. It currently has over 40 million streams on Boomplay.

Black Sherif is getting ready to release his debut album, and the tracklist has everyone excited. END_OF_DOCUMENT_TOKEN_TO_BE_REPLACED

The Ghana Police Service has mounted a search for a man who was caught on video flogging a baby under a tree. END_OF_DOCUMENT_TOKEN_TO_BE_REPLACED

Broadcaster, Serwaa Amihere has advised women not to put too much stress on their men as they may be going through a lot. END_OF_DOCUMENT_TOKEN_TO_BE_REPLACED

Dr. Edem Mahu from the University of Ghana, has received the “Africa Award for Research Excellence in Ocean Sciences” from AGU. END_OF_DOCUMENT_TOKEN_TO_BE_REPLACED

A brand-new Alisa Hotel location in Tema was unveiled on Friday, September 30, 2022 in pomp.  END_OF_DOCUMENT_TOKEN_TO_BE_REPLACED