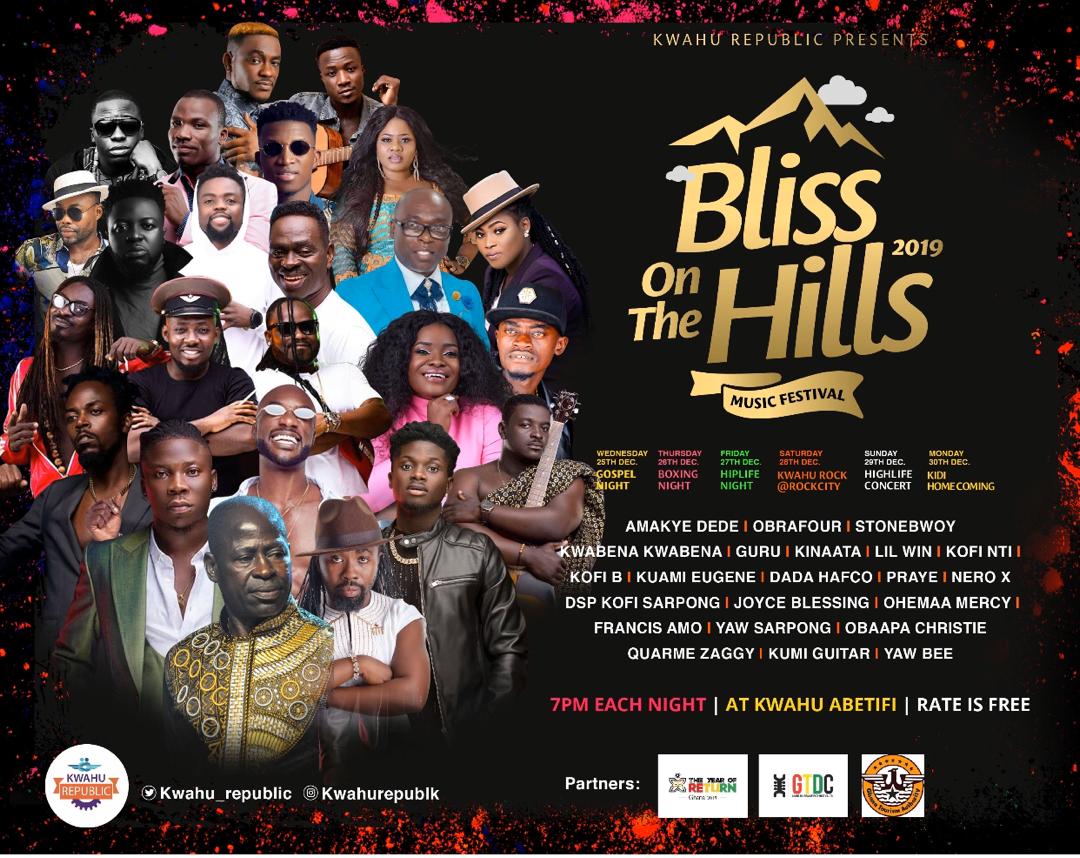 Patrons of the Bliss on the Hills Music festival which takes place on the serene mountains of Kwahu every Christmas season will have a double dose of fun as this year’s festival has been adopted as part of the Year of Return calendar activities.

Bliss on the Hills is an annual week-long music festival organized every Christmas for patrons in Kwahu and its environs at Kwahu Abetifi by Kwahu Republic.

The core objective of this event is to:

This years Bliss On Hills promises to be a memorable one with back to back performance from seasoned artist. The event will be opened on 25th December with a gospel night show headlined by Ohemaa Mercy and other renowned gospel musicians such as DSP Kofi Sarpong, Yaw Sarpong, Joyce Blessing, Obaapa Christie, and Francis Amo.

The 26th will be a Night of Boxing as patrons will get the opportunity to witness two international bouts between Samir Bastie (GHA) vs Sunday Ajuwah (NIG) and 4 other local bouts.

The Hiplife night which is on Friday 27th will see Kwahu version of #PaeMuKa@20 as Obrafour a native of Kwahu will be given the platform to offer a thanksgiving to patrons for 20 years in the industry. The night will also see performance from Kuame Eugene, Praye, Kwaw Kese, Guru, Nero X, and Lil Win.

Kwahu Rock will happen on Saturday, 28th which is going to be the only paid event for this year’s BOH festival. It will be a night of enthralling music and dance at the plush Rock city Night club, Kwahu Nkwatia. Kwabena Kwabena, Kofi Kinaata and Stonebwoy will be the artist for the night.

The popular Highlife night will be on the 29th, with the king of Highlife, Abrantie Amakye Dede headlining the evening with supporting performances from Kofi B, Kofi Nti, Dada KD, Kumi Guitar, Dada Hafco, Quarme Zaggy, and Yaw Bee.

The climax of the music festival will be on 30th, where Lynx entertainment and Kwahu Republic brings to patrons the HOMECOMING of KiDi. As a native of Kwahu, he will be performing alongside some of his friends to herald his homecoming since he became prominent in the music industry.

With this weeklong dose of music and entertainment, it will be of great deal to escape the heavy traffic in the capital city during the yuletide and have some fun on top of the mountains in Kwahu. Kwahu is not only about easter, but real fun all year round.

Related Topics:Bliss On The Hills
Up Next

5 ways to keep your sleep hygiene in check