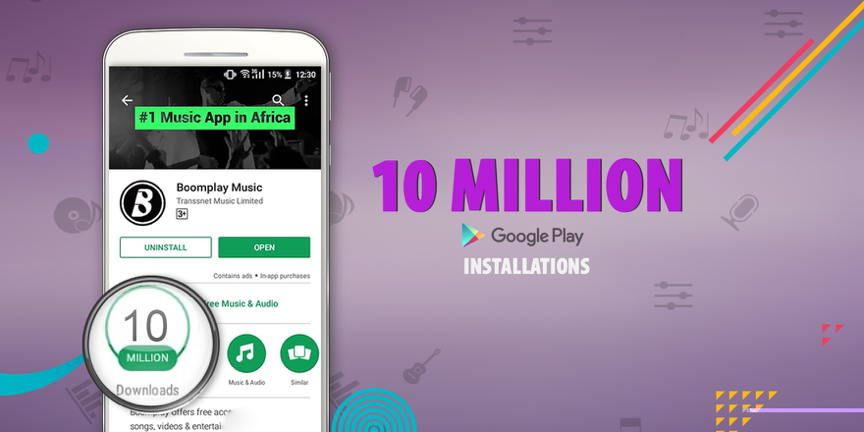 Boomplay Music’s unique and user-friendly application has made it a top choice for consumers of music and entertainment content. The platform has given millions of Africans unfettered access to millions of songs, videos and entertainment trending news.   It has also provided a rallying point in the digital music ecosystem by driving more customers to mobile music consumption. Boomplay Music’s international best practice in ensuring providers make revenues off their content has made it the toast of local and international artistes and content providers. This is in addition to making sure that intellectual property is protected using the best tech innovations. It would be recalled that the music content platform was adjudged the ‘Best African App’ at the AppsAfrica Awards, which held in Cape Town, South Africa in November 2017. Boomplay emerged as the number one app in Africa from a category strongly contested by other popular apps including Carter – SA, Asorbia – Ghana, Truecaller Africa and Feastfox – SA. About the new milestone, Sadiq Abdulai Abu, -Boomplay Country Manager, Ghana, said, “This is an important achievement as we work towards entrenching the power of Africa’s No. 1 music app in Ghana. Boomplay provides a refreshingly different experience for music talents and their fans and we look forward to creating a mutually rewarding relationship with the entire Ghanaian music and entertainment ecosystem. On how the platform has maintained its top position, Mr Oye Akideinde, Regional Director (West Africa), said, “Single companies do not build great ecosystems. Thank you to all the individuals and partners who contributed to Boomplay Music’s 10 Million Installs on Google Play Store. We couldn’t have done it without you. We keep improving based on your feedback, which is so vital for our service’s growth. This new milestone is a step closer to building the largest and most sustainable music ecosystem for artist and fans in Africa’’. Rising from a modest number of installs when it launched in Google Play store in 2016, the platform rose to 1 million installations in January 2017 and by November of same year, it had risen to 5 million. Its fast-growing streak of installations doubled in June, 2018 to 10 million installations making its total user base 29 million. Boomplay Music is now tipped to reach the 40 million total user base by December 2018 confirming the streaming service as Africa’s fastest rising music service. The platform parades content from multiple genres such as Highlife, Hiplife, Hip-Hop, Afropop, Reggae and Gospel among others. Some of the biggest names on the platforms include Shatta Wale, Sarkodie, Efya, Stonebwoy, King Promise, Kuame Eugene, Kidi, MzVee, Kwesi Arthur, Daddy Lumba, Wizkid, R2bees, Mr Eazi, Tiwa Savage Chris Brown, Cardi B amongst others. The app comes pre-installed on TECNO, Infinix & itel Android devices and is available on Google Play Store for all Android users. iOS version will be made available later in the year 2018.]]>
Related Topics:Boomplay Music
Up Next

WATCH IT LIVE: Stonebwoy performs at Reggae Sumfest In Jamaica for the first time