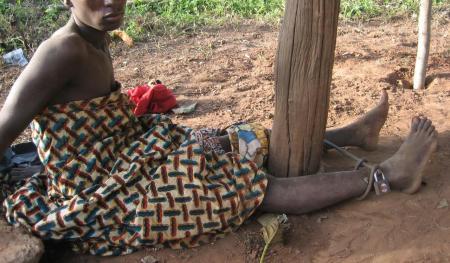 The government of Ghana should ensure adequate funding for mental health services in Ghana, as a crucial step to eliminating the widespread practice of shackling and other abuses against people with psychosocial disabilities, a coalition of nongovernmental groups said today. On the eve of World Mental Health Day, October 10, 2017, the coalition said that the finance minister should set a levy to support mental health services, as required by Ghana’s 2012 Mental Health Act.

The coalition includes MindFreedom Ghana, Mental Health Society of Ghana, BasicNeeds Ghana, Law and Development Associates, Human Rights Advocacy Center, Christian Health Association of Ghana, Human Rights Watch, CBM, Disability Rights Advocacy Fund, Anti-Torture Initiative, and former United Nations Special Rapporteur on Torture Juan Mendez. “People in Ghana resort to shackling people with psychosocial disabilities because they see no alternatives,” said Peter Yaro, executive director of BasicNeeds Ghana. “It’s now been five years since the passage of the Mental Health Act and it is high time for the government to invest in community-based mental health services so people with psychosocial disabilities can get the support they want, instead of ending up in shackles.”

The Mental Health Act of 2012 lays out the legislative framework for a levy, and says the finance minister should set up this resource to fund mental health services through parliament. The levy has yet to be established. Ghana has made progress in safeguarding the rights of people with disabilities following reports by Human Rights Watch and the former UN special rapporteur on torture, Juan Mendez. In July, the Mental Health Authority oversaw the release of more than a dozen people with disabilities who were chained in Nyakumasi Prayer Camp in the Central Region. With pressure from local and international groups, the Mental Health Authority has taken steps to enforce a ban on shackling, but much more needs to be done.

“The government of Ghana has a real opportunity to lead by example, sending a message to other countries in the region and globally that it will not tolerate the inhumane treatment of people with psychosocial disabilities,” said Julian Eaton, senior mental health advisor at CBM. “They represent some of the most marginalized and invisible in society and deserve the same dignity and respect as anyone else.” People with mental health conditions in Ghana should no longer be subjected to inhumane treatment. Instead, the government needs to ensure that people with psychosocial disabilities are treated with dignity and can live full and independent lives.

Adequate funds should be allocated to develop voluntary mental health services, support for housing and independent living, as well as job training. More also needs to be done to combat the stigma associated with mental health, including in the workplace, the central theme of this year’s World Mental Health Day. In Ghana and many other countries, people with real or perceived psychosocial disabilities – that is, mental health conditions – are sometimes seen as being possessed by evil spirits or demons.

Due to these beliefs and the lack of local mental health services, some families and communities resort to chaining the person during a mental health crisis, either in their homes or in spiritual health centers, known as prayer camps. In some prayer camps, Human Rights Watch found that people were chained to trees, frequently in the baking sun, where they would bathe, defecate, urinate, eat, and sleep, some for years.

Today the coalition launched a social media campaign, #BreakTheChains, to combat the stigma associated with mental health, and push for the government of Ghana to fulfill its commitments under the Mental Health Act and the UN Convention on the Rights of Persons with Disabilities. “It’s not enough to tell people not to shackle – enforcing the ban on shackling is the key,” said Dan Taylor, director of MindFreedom Ghana. “This will involve more than a verbal and legal commitment, but a financial commitment as well. We call on you, honorable minister of finance, to set up the levy as a matter of priority.

LOL: Watch a Nigerian narrate how he got robbed while soliciting sex from a transgender prostitute