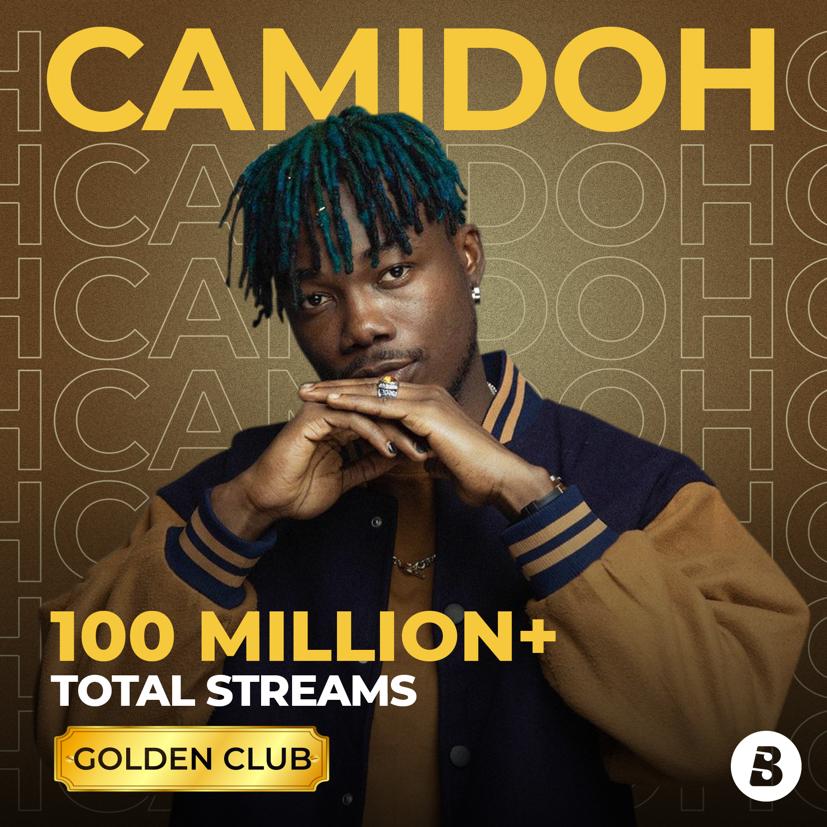 Camidoh joins Boomplay’s Golden Club for reaching and surpassing a milestone of 100 million streams. The “Sugarcane” hitmaker becomes the fourth Ghanaian artist to attain this feat following Black Sherif, Sarkodie and Shatta Wale. Camidoh is now part of a club of African superstars which includes the likes of Burna Boy, Wizkid, Davido, Diamond Platinumz, Rayvanny and more who have had record achievements and milestones on Boomplay.

Camidoh burst onto Ghana’s music scene in 2018 when he was signed to Grind Don’t Stop (GDS) indie label and dropped his first single, “For My Lover”. The single and its remix set a buzz around him as the next big thing leading to his first project, Contigency Plan (CP) – a six-track EP that had rave reviews.

However, Camidoh’s big breakthrough came in December when he released the viral hit single, “Sugarcane”. The song shot Camidoh to stardom and when the chart topping “Sugarcane” remix featuring King Promise, Mayorkun and Darkoo dropped in April 2022, Camidoh became one of the most sought after African stars in the year. He followed the mega single with the capsule “Sugarcane EP” and other notable singles “Kaba” and “Slow” to further extend his reach across Africa and beyond.

Starting 2023 on a high note, Camidoh is out with a collaborative EP with his GDS label titled “A Lifetime is Not Enough”. He hopes to accomplish great things in the year with his debut album scheduled to drop before the year ends.

Ghanaian Reggae and Dancehall artist, Stonebwoy has been captured in a studio with American singer, Jordin Sparks following their recent meeting in Los Angeles. END_OF_DOCUMENT_TOKEN_TO_BE_REPLACED

A Lagos State High Court, Southwest Nigeria has awarded N5m damages against a singer, Ikuforijimi Abdulrahman, aka Oxlade, over a leaked explicit sex tape with a woman on a social media app, Snapchat. END_OF_DOCUMENT_TOKEN_TO_BE_REPLACED

Ghanaian rapper, Kwaw Kese has recounted his contribution to the success of Stonebwoy’s career. END_OF_DOCUMENT_TOKEN_TO_BE_REPLACED

Ghanaian Afropop and R&b singer, Camidoh has stated that he dropped an EP instead of an album to further solidify his brand some more. END_OF_DOCUMENT_TOKEN_TO_BE_REPLACED

Ghanaian Radio/Television Personality, Deloris Frimpong Manso, popularly known as Delay, has revealed that she has been blocked on Twitter by her colleague Abeiku Santaana. END_OF_DOCUMENT_TOKEN_TO_BE_REPLACED