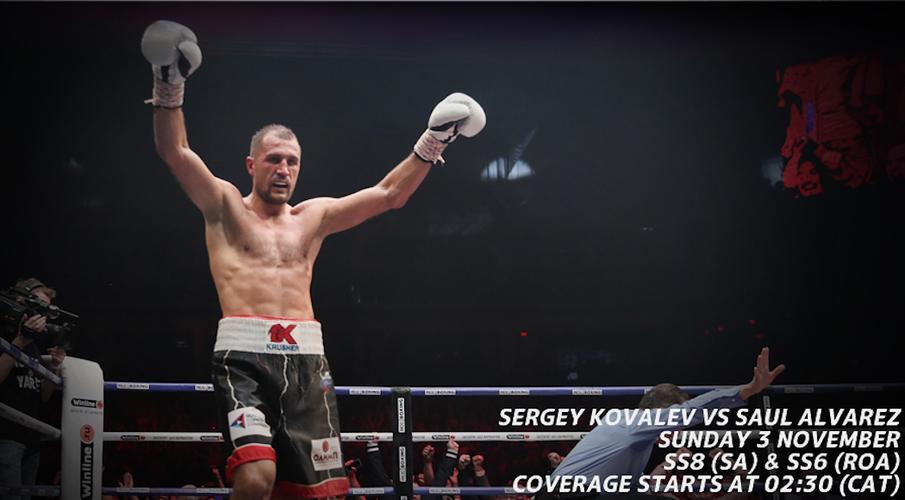 Middleweight champion Saul “Canelo” Alvarez has always sought tough challenges. This weekend, he faces one of the most daunting as he jumps up two divisions to take on big-punching light-heavyweight champion Sergey “Krusher” Kovalev in a fascinating match of styles.

The action, taking place in Las Vegas, will be broadcast live on SS6Afrom 1am on Sunday.

Now in the sixth year of an unbeaten run, Alvarez has more or less cleaned up the middleweight division and saw in Kovalev an opportunity to cement his legacy. With just a single defeat in 55 outings, greatness is already assured. Beating Kovalev, however, would elevate Alvarez’s status and put him in the reckoning as boxing’s pound-for-pound king.

Although the Mexican has been installed as a betting favourite, Kovalev is determined to make his greater size and power count. Alvarez is a tremendous defensive fighter, but Kovalev carries heavy artillery to the extent that in his last fight, against Anthony Yarde, it was a jab that finished off the pesky Briton.

Kovalev has been written off by most, but he’s a gritty fighter who will happily trade on the inside or outside if it means getting off power punches.

The Russian believes that he has far more to lose than Canelo this weekend.

“I should defend my title, I will defend my title. If I lose, I lose more than Canelo loses. Canelo, he is trying to make his history. But I’m here. I’m in my position.”

Said Alvarez: “Moving up two divisions against a world champion is a big challenge, worrying about a champion at light-heavyweight. But I also think that it’s the most important fight of my career. That’s why we are doing this to keep making history.

Related Topics:Saul "Canelo" Alvarez
Up Next

HISTORY and LIFETIME channels to remain on DStv