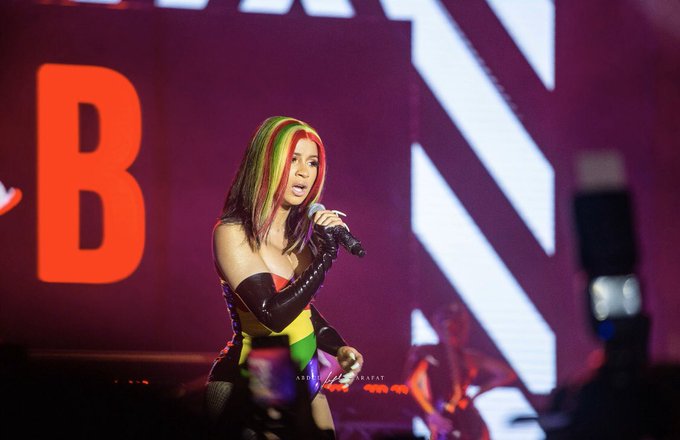 When news of Cardi B coming to perform in Ghana broke, many Ghanaians were excited but after the events of the past weekend, many are disappointed. Events at the Livespot X Festival was worse than the failed “MEAT & GREET” and here’s what really happened.

The Livespot X Festival was considered the first event to officially kick off the #DettyDecember experience and following the highlights from Cardi B’s time in Nigeria, expectations were really high.

Cardi B arrived in Ghana at 1 pm on Sunday and was welcomed by a huge crowd at the airport. She expressed her excitement to enjoy her time and showed the world her awesome hotel room at the Kempinski Gold Coast Hotel. This got fans who had bought tickets more excited and made some (myself included) to go buy last-minute tickets.

We were going to party the ‘BARDI GANG’ way but left with nothing but disappointment. This is was the ‘FYRE FRAUD’ of Ghana!

When prices for the Livespot X Festival tickets were announced a lot of people found them outrageous.

50gh for Regular, 500gh for VIP and 800gh for VVIP (Gold Circle) that price difference gave me the impression that those with VIP and VVIP tickets would enjoy some pecks the regular ticket holder couldn’t. Due to low ticket sales, prices for the tickets were slashed and some celebrities gave out free tickets in hopes to increase attendance.

At the gate, Regular tickets were being sold for as low as 10gh, 50gh for VIP and 100gh for VVIP this was my first sign that the night was not going to be what I imagined.

As VIP/VVIP ticket holders used a different route to the venue, the entrance for regular tickets holders was packed. I checked in and made my way past security which was very smooth because it wasn’t very much crowded.

Inside the stadium, the stadium seats all were empty and less than 300 people were gathered on the main pitch.

Livespot X Festival on it flyers said gates would open at 2pm and I presumed the main event would start at 7pm. However, at 9pm Cardi B was still at her hotel for an unplanned ‘MEET & GREET’.

I checked into the venue at 9:30 pm and there was only music playing with MC Kojo Manuel holding the crowd done. It was a great session and got the crowd really hyped.

Kojo Manuel ended his session and around 10:15pm there was no one on stage just a DJ playing music and people dancing. At 10:30pm, the whole stage lighting system went off!

Guru came on stage a few minutes later and performed to a non-responsive audience who were tired of standing. The sound was terrible and his microphone kept going off. There was still no stage lighting.

At 11pm. Eddie Blay who was an MC for the night came out to apologize for the lighting situation and the delays. He kept using curse words that offended people more and a DJ kept playing music to entertain the crowd for 30minutes after he left.

Eno Barony was introduced on stage at 11:35pm and killed her intro by spitting some great bars which got the crowd shouting and clapping. She brought on her ‘Di Asa’ (Plus size) dancers and ended her 15mins set, she was one of the best performers of the night.

After she left, the show went back on hold as they tried to fix the stage lights.

Nigerian singer Seyi Shay was the next act to perform at 12am. The sound was so bad, her dancers had to do their intro three times before she appeared on stage. Her performance was a 3/10 for me.

Seyi left the stage and MC Joel took over to hold the crowd down. At 12:20, the number of people in the stadium had increased because the doors were open for everyone at the gate to enter. It had turned into a FREE CONCERT and the large number got me excited.

Nigeria’s DJ SPINALL’s set was the official kick of life into the show. He gave back-to-back hits from Ghana to Nigeria that had everyone on their feet. DJ LOFT took over and also kept the party going till 12:40am.

The stage lights were back now, the sound system was much better and the crowd had increased. We were excited to see one on the billed big acts of the night. But it hit 1am and there was not a single performance just music from the DJ. It was an open-air party on the park.

1:30am and people were tired of waiting and the song being played. Some started to sleep on the grass as others made their way home. People were frustrated and angry as some had come to the stadium as early as 4pm.

After 50 minutes of no performance and word from the organizers, the angry crowd started throwing bottles and stone on stage to vent their frustrations. It had to take someone from the organizing team to come calm the situation down.

The moment people started throwing bottles on stage to show their anger at the event delay. Cardi B came on right after and saved the show 🙏 #livespotfestival #cardibinghana

I presume Cardi B had been notified of the situation because her hypeman came on stage after the incident and people started rushing to the park. CARDI B was coming to perform!!!

Cardi B in her customized Ghana flag leather playsuit and hair stepped on stage at 1:40am. She apologized for her delay and explained it was due to technical difficulties. Performing her hit songs, she addressed the ‘meet and greet’ incident from earlier in the day, Offset’s cheating rumors and how she considers Ghana a very rich country.

From twerking all over the stage, she stripped her shoes and gloves off and threw them into the crowd. I’m still sad I didn’t catch any her items but Cardi B killed her performance. While the crowd couldn’t rap along to all her songs, her choreography, energy, dancers, and hypeman really had the crowd going.

Ending her performance with BODAK YELLOW, Cardi B snatched her wig off and threw it into the crowd as the fireworks went off. She apologized for the delays again, thanked Ghana for hosting her and expressed her excitement to go party at the club. Seeing Cardi B perform for the first time, I rate her performance a 7/10.

Cardi B left the stage at 2:20am and many were excited as we hoped to see one of the big acts to come on stage next. But we were left with music for 20mins and people started leaving the stadium again.

Medikal was the next act to come on stage at 2:40am and performed with Quamina MP. He also brought his girlfriend, Fella Makafui on stage during the performance of his hit song AYEKOO.

Kofi Mole and Becca were the last acts to perform to a small crowd which was only waiting to see Sarkodie and Shatta Wale.

At 3:20 am, word was going round that Sarkodie and Shatta Wale will not be performing. The fans started hurling insults at the organizers and throwing bottles on stage again.

The MCs of the day kept the hopes of fans high by continuously instructing the DJs to play the songs of these artistes while chanting, “Are you ready to see Shatta Wale and Sarkodie?”.

The ‘not so impressed crowd’ ignorantly cheered on by giving the loudest shouts with their very last energy. Disappointment was written on the faces of individuals who stood for hours waiting to witness their favorite Ghanaian artistes’ performance.

After hours of waiting, the few people left began to leave the stadium symbolizing the end of the show without any official sign out from organizers.

I left the stadium at 3:45 am and Sarkodie, Shatta Wale, Tiwa Savage, Partoranking, Joey B, Darey and DJ VRUSKY who were all billed to perform were a NO SHOW!

The organizers are yet to release a statement or issue an apology on the terrible experience they gave patrons who paid between 50gh and 800gh to be at the event.

To think people have been here since 4pm…
No performances in the last 40mims and people are leaving again.
The show is back to BEANS
Not sure what’s happening backstage but this is real BAD! #cardibinGhana pic.twitter.com/BbTOfKOFKZ

Compared to the Nigeria show, there was a lack of communication between the organizers and the acts.

It was also clear that there wasn’t a full stage rehearsal for all the artists before the main show.

The venue for the event was wrong as one couldn’t even tell the difference between the VIP and VVIP.

Choosing Sunday for the event was also a wrong call from the organizers as most people wouldn’t come outcome because they have work the day after.

Media buzz and advertisements for the event started too late. Information on ticket outlets was dropped just 2 weeks to the event.

From the controversial ‘MEET& GREET’ to the flop of the main show, it is clear the organizers failed in properly planning for the event.

Hopefully, this Livespot X Festival experience will serve as a lesson to all event organizers who have activities planned for this festive season.

Continue Reading
Advertisement
You may also like...
Related Topics:Cardi B

One of the pioneers of Twi rap, Mahoney P dies after years of battling cancer