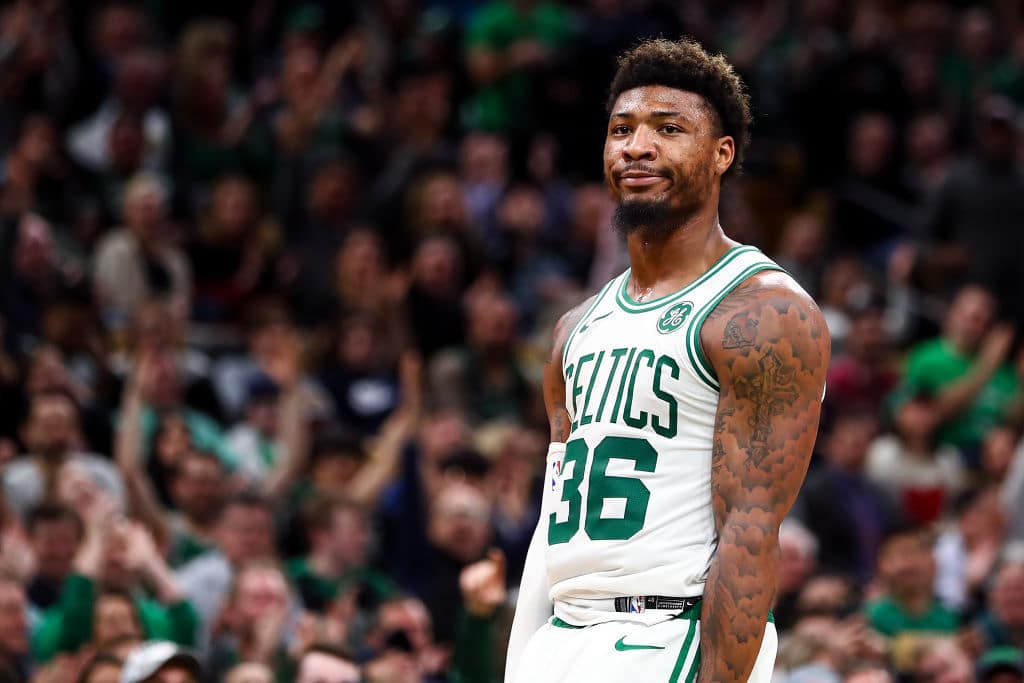 Boston Celtics guard Marcus Smart tested positive for COVID-19 on Thursday, making him just the latest NBA player to come down with the coronavirus.

Yet Smart, the lone player on the Celtics who had produced a positive test, feels totally normal.

“I feel great. I feel fine,” Smart said Friday night on CNN while speaking with Chris Cuomo. “I feel like I can go play a game right now.”

Boston Celtics’ Marcus Smart, who tested positive for the coronavirus, is calling on young people to take the virus “seriously.”

“Be alert to what’s going on and take the precautions to not only protect yourself. By protecting yourself, you protect others,” he says.

Smart joins a growing list of players in the NBA world to have the coronavirus. Two Los Angeles Lakers players tested positive on Thursday, but did not identify themselves. The Brooklyn Nets announced that four players had tested positive earlier this week, and Kevin Durant later identified himself as one of them, however the other three did not. Donovan Mitchell has also tested positive, along with one Denver Nuggets staff member and three Philadelphia 76ers staff members.

Smart said he has taken team guidelines seriously since they returned from their last road trip and all underwent testing, and remained quarantined, too.

That, along with the fact that he isn’t showing any symptoms, is what shocked him the most after receiving the positive diagnosis.

“For me, it was just like a surprise,” Smart said on CNN. “Like I said, I feel fine. I don’t have any symptoms. I haven’t had any symptoms. When they told me I had it, I was just like, ‘Oh, wow.’ It definitely really makes you alert to what’s going on and the situation at hand.”
Marcus Smart: ‘Take this seriously’

Many in the sports world have been echoing advice from officials and asking fans to stay home to help curb the spread of the coronavirus — which has seen more than 261,000 cases worldwide and more than 17,800 in the United States alone as of Friday night, according to the New York Times.

LSU coach Ed Orgeron recorded a PSA this week with that message, and Pittsburgh Steelers quarterback Ben Roethlisberger shared a similar one on Friday with his family.

“[Staying in is] the key right there, because people that contract the virus can be asymptomatic and not show symptoms, it’s really hard for anyone to know that they have the virus,” Smart said on CNN. “Being around a group of people, being around friends and family and really not isolating yourself, you’re a carrier and you become spreading the virus around without even knowing. And that’s the biggest key because you can’t tell just by looking at somebody whether they have it or not because they can still look healthy and normal and still have it and spread it, and then that’s where we get the problem that we have now.”
The 26-year-old — who has averaged 13.5 points and 4.8 assists this season with the Celtics, his sixth in the league — also had a message to young people.

“Take this seriously. Be positive,” Smart said on CNN. “I’m OK. I’m going to be OK. But definitely be alert to what’s going on and take the precautions to not only protect yourself. By protecting yourself, you protect others.”

Related Topics:Marcus Smart
Up Next

In a message for International Youth Day, His Royal Highness The Prince of Wales said: END_OF_DOCUMENT_TOKEN_TO_BE_REPLACED