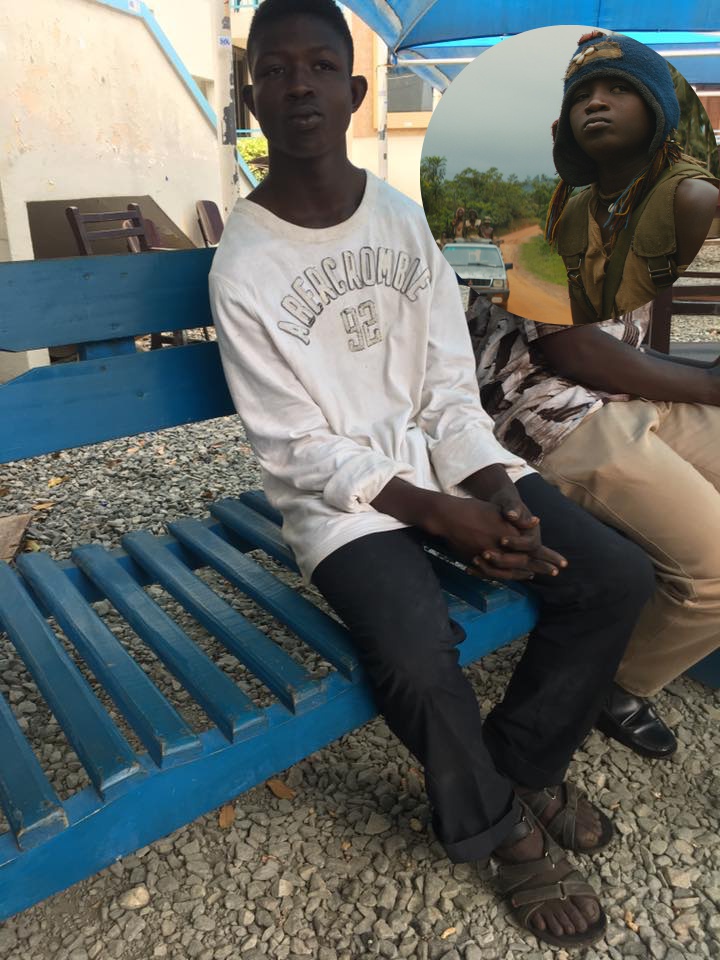 When 2015 American war drama film written, co-produced and directed by Cary Joji Fukunaga , “Beast of No Nation” gained world acclaim, one of the big headlines was about how the producers claimed they discovered their young actors playing on the streets.

The family of Abraham Attah was publicly came out to deny rumours that the young actor was discovered by producers, as a street kid. Reports now suggest that  Emmanuel Nii Adom Quaye, popularly known as Strika, who  also featured in the hit Netflix feature has been seen begging for money on the streets.

In a series of interviews and reports the young actor has said that he never got to receive payment for his role even though he was told someone was holding the money in trust for him.


Strika alleges that after shooting the movie a producer named Kofi Robert informed him that he would hold the money in trust by depositing into a bank account until he turned 18 but that hasn’t happened even though he is approaching 19.

Strika who now hawks on streets of Accra says neither his 1% share of the profit gained by American service provider, Netflix, has reached him.

“After the movie, I was to be paid one per cent of the profit made from the movie. They told me it’s in the bank but I am yet to see the money,” he explained.

Strika has also revealed that his relationship with his co-actor, Abraham Attah hasn’t been the same ever since he relocated to the USA.

“The way he [Abraham Attah] now behaves is not good. The way he talks; the way he replies is not good. He will be shouting on you and all stuff, I don’t know if it’s because he has traveled outside [sic],” he said.

Strika also disclosed that he was paid GHC 10,000 for “Jungle Justice”, a movie he starred in after “Beast of No Nation”, but a manager by the name, Mawuko, used all the monies to buy him “clothes and shoes”.

“I shot Jungle Justice and was paid GHC 10,000 Ghana Cedis. Mawuko used the money to buy suits and other things the money was not given to me directly; I was only told…! Strika disclosed.

Meanwhile Manager for Strika, Mawuko Kuadzi has spoken exclusively to zionfelix.net concerning the allegations the young actor has made against him.

In a chat with zionfelix.net Monday evening in Accra, Mawuko admitted that his artist was given 1% out of the total sales of the Beast of No Nation film. According to him, the actor real name  Emmanuel Nii Adom Quaye was given $30, 000 same as his colleague Abraham Attah who is now studying in America.

When asked about the money, he told Zionfelix that it has been deposited at a bank in Strika’s name since he was not 18 at the time the cash was paid. He also mentioned during the chat that Strika was paid before shooting Beast of No Nation and part of that money is still at the bank in his name. Mawuko explained that part of the upfront the lad was given is still in his name at the bank which adds to the $30,000 he was given after the sales of the movie.

He, however, denied the actor’s statement that he made Gh10,000 from a movie titled “Jungle Justice”. Mawuko Kuadzi disclosed that Strika was paid Gh1000 from the Regina Van-Helvert-produced short film and that is what was used to purchase a suit, tie and shoes for him to appear at a movie premiere.

Strika he said has ran away from school on several occasions and was made to take an undertaken that he will be dismissed from the school should he repeat the act but he again left the school without the administrator’s notice.

On the way forward for the boy since he has made it clear that he is not interested in school, the manager told Zionfelix.net that now that he has found the whereabouts of his artist he has been searching for, he will sit him down and plan how to utilize the money they have saved for him but stated without mincing words that the cash will not be given to him since he will misuse it.