American singer, Chris Brown has come under attack after he left some “shadeful” comments under her ex, Karreuche Tran’s new boyfriend, Victor Cruz’s post on Instagram.

Victor Cruz posted a photo of him and Karrueche on the gram and Chris went under his comment section to leave a comment or two about his fashion style.

In one of the comments, the R&B singer wrote:

“No shade boo,, BUT PLEAS STYLE HIM . He look like he shopping of the manikin and trying to bargain wit the sales manager. Retired wrestler spanks. IM F–KING AROUND … good bless.”

Breezy didn’t stop there, he went ahead to add,

He continued, “Nothing bad or major . UPGRADE HIM SIS. I’ll take him around to style him. NOT HATE. He just need some game spirit,” he went on, before leaving his final remark, “Peace love and joy. JUST PLEASE UPGRADE YA MAN BOO.”

Eventhough Breezy deleted the comments, “The Shade Room” managed to snag some screenshots. (See below.)

Breezy’s comments recieved a lot of backlash from fans who say he’s still hung up on Karreuche: 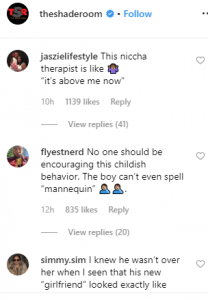 Karrueche Tran and Chris Brown started dating in 2011, two years after his unfortunate incident with former boo, Rihanna. They had an on and off relationship for about 3 years until they finally called it quits in 2014. They have a daughter together.

Even though Karreuche has a restraining order on Brown, he is still using social media to get to her.

A federal judge signaled on Wednesday that she plans to order disgraced R&B superstar R Kelly to pay more than $300,000 to one of his victims in a decades-long scheme to use his fame to sexually abuse young fans. END_OF_DOCUMENT_TOKEN_TO_BE_REPLACED

Coolio, who rose to fame in the ’90s with hits like “Gangsta’s Paradise” and “Fantastic Voyage,” has died. END_OF_DOCUMENT_TOKEN_TO_BE_REPLACED

NBA YoungBoy welcomed a new addition to this family recently as his fiancée Jazlyn Mychelle gave birth to a baby boy. END_OF_DOCUMENT_TOKEN_TO_BE_REPLACED

Lil Wayne is on the move. END_OF_DOCUMENT_TOKEN_TO_BE_REPLACED