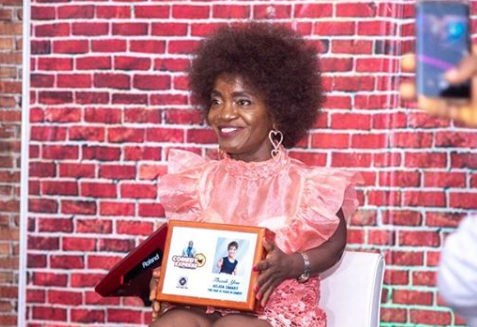 Organizers of ‘Comedy Express’ have honoured veteran actress and comedienne Adwoa Smart for her contributions towards Ghanaian comedy.
The legendary comic actress who has been in the comedy industry for over 2 decades was celebrated on Friday 4th October, at the ‘Comedy Express’ event organised by DKB and his friends at SOHO Bar inside the Marina Mall in Accra.

Adwoa has been in the film industry since 1984 when she was discovered by Grace Omaboe. She has since performed in a number of television dramas and stage productions for Obra and also featured in a number of films. These include ‘It’s Too Late 1 &2’, ‘Father & Son’, ‘Naomi’, ‘Yaa Asantewaa’, ‘Money Bag’, ‘Matters of The Heart’, ‘Judgement Day’, ‘Lucifer 1 & 2’, among many others.

The event also paraded a number of female comedians at the ceremony dubbed ‘Girls Kasa’.

Among performers were Shawkiya, Lamisi, Feli Nuna and Petrah, who made the evening a memorable one.

TV3 is not only best in new and entertainment, but best in rewarding its staff too. END_OF_DOCUMENT_TOKEN_TO_BE_REPLACED

The Ave Maria School has launched its 40th-anniversary celebration by urging school leaders to provide better opportunities and platforms for interaction with students in order to guide them in their education. END_OF_DOCUMENT_TOKEN_TO_BE_REPLACED

Sadiq Abdulai Abu, the Chief Executive Officer (CEO) of 3Media Networks has stepped down from his role. END_OF_DOCUMENT_TOKEN_TO_BE_REPLACED