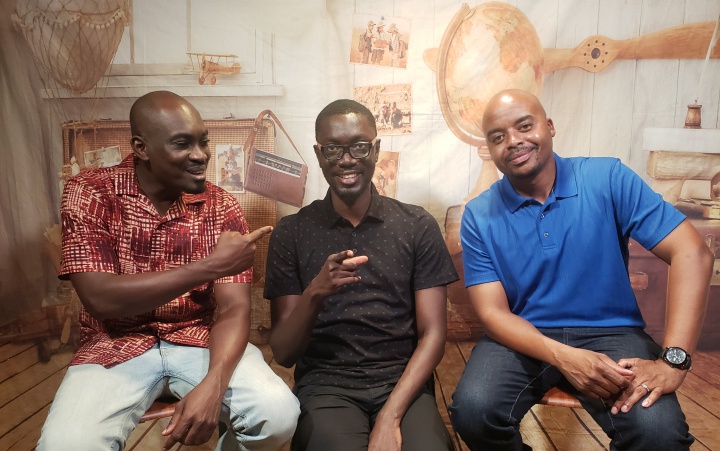 American writer and director, Anwar Jamison has wrapped up shooting scenes for his latest film, ‘Coming to Africa’ in Ghana.

According to the filmmaker who is known for ‘5 Steps to a Conversation’,  ‘A Bitter Pill to Swallow’and ‘Funeral Arrangements’, the new film is ‘Coming to America’ flipped and reversed!

He explained in an interview on Ameyaw TV that: “The plot is completely different from ‘Coming to America’ but I wanted to play on that because it is so familiar to a lot of people, it is a movie that is still dear to the hearts of many.  So I just said, what if you had a similar situation of two guys going the other way; being dropped into a completely different culture and adjusting and learning from it?

“I just wanted to give a balance perspective of Ghana, an African country because over there in the US, we never get that.  We grew up with a very one-sided view of Africa, it is always negative but the more I read, the more I learned, and the more I had people who visited tell me more about what they saw, I just wanted to capture it in a movie, I thought that would be a perfect format. “

Playing the two Americans who get to experience Africa through Ghana are Anwar himself and Powwah Uhuru.  The Ghana cast includes David Dontoh, Paulina Oduro, Nana Ama McBrown and PY Addo Boateng, who is also a producer on the project.

Anwar Jamison expressed his appreciation of the crew he worked with while filming in Ghana. “ I’ve never had a crew like that, they surprised me.  The energy was on and their dedication was amazing. Sometimes in America people get a little lax, and feel entitled but over here everyone was professional and fun.”

With the Ghanaian scenes completed, the remaining scenes are going to be shot in Memphis, where Anwar plies his filmmaking trade.  He is aiming for a summer release in 2020 and premiering it at an international film festival.

“We are going to roll out something in the spring for everybody and that would be worldwide. And then we will come back to Ghana sometime in the summer to have that time to celebrate because it is quite an accomplishment. Nobody has done this before; from the biggest Hollywood studios to Indy producers, nobody has come here to tell this kind of a story,” Anwar expressed.

Anwar Jamison has film in his blood. As a child prodigy, he attended John Robert Powers Acting School in Tulsa Oklahoma at age 4 and was featured in several commercials. At 16, he enrolled at the University of Memphis and ultimately received his B.S. in English Writing from UW-Whitewater.  He went on to receive an M.A. in English and an M.A. in Film & Video Production from the University of Memphis.

In 2008, he wrote and directed Funeral Arrangements, his first feature film, which was distributed nationally by Select-O-Hits.

Already an English Professor, in 2012 he established the Digital Media & Film program at Arkansas State University Mid-South in West Memphis, Arkansas for which he still serves as Lead Faculty.

In 2013, he wrote and directed his second feature film, 5 Steps to a Conversation, which was also distributed nationally by Select-O-Hits.

In 2017, he co-authored Priceless Dream: The Story of the Dallas Cowboys #1 Fan with Ms. Carolyn M. Price.  The book is the biography of Ms. Price, coming of age in segregation-era Dallas and her ultimate rise to universally recognized Dallas Cowboys number one Fan.

In 2019, he released A Bitter Pill to Swallow, his first documentary feature.  The film tackles the epidemic of prescription pill abuse as a street drug and its effect on the users, their families and the community.

Burna Boy has revealed in an interview that American R & B star Toni Braxton gets 60% of the royalties of his last single ‘Last Last.’ Burna Boy made this revelation when answering questions of how the single came about while appearing on a podcast. END_OF_DOCUMENT_TOKEN_TO_BE_REPLACED

Ghana have been banned from competing in the next two editions of the FIFA U17 Women’s African Qualifiers and fined $100,000 by the Confederation of African Football. END_OF_DOCUMENT_TOKEN_TO_BE_REPLACED

Although the music industry in Ghana is heavily dominated by males, there are a few young women, pulling their weight, and rubbing shoulders with their male counterparts. END_OF_DOCUMENT_TOKEN_TO_BE_REPLACED

Chris Fonye popularly known as “Hydraulix Fonye” is a Ghanaian producer, sound engineer, songwriter and singer with a vast experience in the Ghanaian entertainment industry. END_OF_DOCUMENT_TOKEN_TO_BE_REPLACED

Although there may be hundreds of afro-beats artists in the country, Highly Spiritual Music signee, Lasmid believes he is unique. END_OF_DOCUMENT_TOKEN_TO_BE_REPLACED