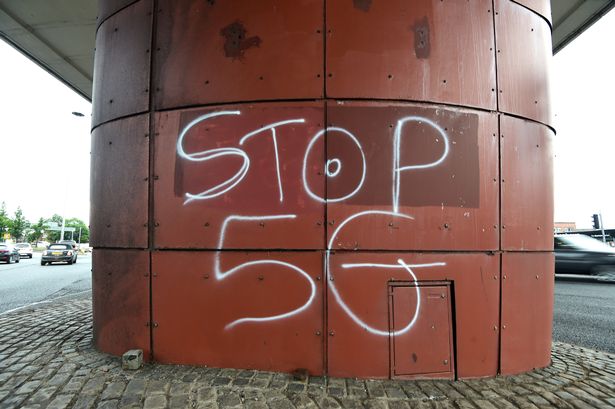 By now, you must have seen a viral video from the UK suggesting that telecom companies are installing masts for 5G technology while Britain goes under lockdown due to the spread of the coronavirus.

The Nationa Health Service (NHS) England’s national medical director, Stephen Powis, has said that the coronavirus theory was ‘fake news’ and added he was ‘disgusted’ by the ‘utter rubbish claims’ during a press briefing where Cabinet Officer Minister Michael Gove said”That is just nonsense, dangerous nonsense as well.”

Stephen Powis, agreed and also reiterated the ‘theory’ was totally untrue, saying that he was ‘disgusted’.

“The reality is that the mobile phone networks are absolutely critical to all of us, particularly at a time when we are asking people to stay at home.

“Those are also the phone networks that are used by our emergency services and our health workers and I’m absolutely outraged, absolutely disgusted that people would be taking action against the very infrastructure that we need to respond to this health emergency.

“It is absolute and utter rubbish and I can’t condemn it in stronger terms than that.”

Celebrities who are “fanning the flames” of conspiracy theories linking 5G technology with coronavirus should be ashamed, a scientist has said.

Videos purportedly showing masts on fire were posted on social media after theories about the link between the mobile technology and Covid-19 circulated online.

Dr Michael Head, senior research fellow in global health at the University of Southampton, said: “Conspiracy theorists are a public health danger who once read a Facebook page.

“Here, we also see similar groups of people keen to show their ignorance on a topic where they have no helpful expertise, nor any inclination to post useful public health messages.

“The celebrities fanning the flames of these conspiracy theorists should be ashamed.”

Mobile UK, the trade body which represents network providers, said key workers had been abused and infrastructure threatened as a result of the claims.

On Thursday evening, West Midlands Fire Service said eight firefighters attended an incident involving a 70ft tower on a telecommunications site in the Sparkhill area of Birmingham, although the cause of the fire was not determined.

Fire crews were called to a blaze at a phone mast in Aintree, Merseyside, on Friday night but a spokeswoman for Merseyside Fire and Rescue Service said there were “no signs of foul play” so an investigation into its cause was not launched.

The mast had been featured in a video shared on social media the previous weekend by someone who claimed to be measuring radiation from it.

Professor Adam Finn, professor of paediatrics at the University of Bristol, said: “The internet connections these networks give us are one of the most important tools we are using to co-ordinate our response to the epidemic and efforts to do research to overcome it.”

Prof Brendan Wren, professor of microbial pathogenesis, at the London School of Hygiene & Tropical Medicine, said a connection between the phone masts and the virus would be “both a physical and biological impossibility”.