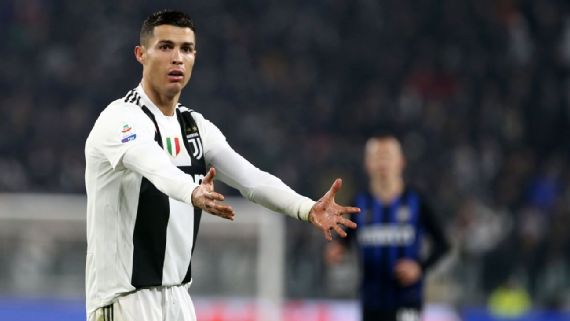 Football star, Cristiano Ronaldo, is set to be summoned to face rape allegations after lawyers for his accuser, Kathryn Mayorga, tracked down his address in Italy.

Ronaldo has emphatically denied claims he attacked Mayorga at a Las Vegas hotel 10 years ago.

US police reopened the case in October and Mayorga’s lawyers have been hunting for the footballer’s address since then.

According to the UK Mirror, Ronaldo’s home address in Turin has been found, after searching through property records held by Italy’s Central Authority.

Now Mayorga’s team have asked the official process servers to deliver the summons and complaint.

The document is expected to be sent in the next couple of weeks once it has been translated.

A US judge last month allowed more time to track down the 34-year-old’s address in order to start court proceedings.

Mayorga claims Ronaldo raped her in his luxury suite, before paying her £295,000 in ‘hush money’, which she accepted because she ‘felt intimidated’.

Trailer: The Black Godfather premieres globally on Netflix on June 7

Videos have emerged of the moment a Russian ice hockey star who signed a million-dollar contract with an American team was rounded up by Russian policemen and taken to an army enlistment office before he is sent to fight in the war in Ukraine. END_OF_DOCUMENT_TOKEN_TO_BE_REPLACED

A woman who flashed a gun before attempting to make her way into Diddy’s BET after-party was arrested outside the mogul’s house. END_OF_DOCUMENT_TOKEN_TO_BE_REPLACED

Andy Goram has died at the age of 58 after a short battle with cancer. END_OF_DOCUMENT_TOKEN_TO_BE_REPLACED

A woman who went viral 2 years ago for marrying the man who caught the garter after she caught the bouquet at their friends’ wedding, has shared an update on their marriage. END_OF_DOCUMENT_TOKEN_TO_BE_REPLACED

Liverpool star, Mohamed Salah has committed his future by signing the biggest deal in the club’s history. END_OF_DOCUMENT_TOKEN_TO_BE_REPLACED