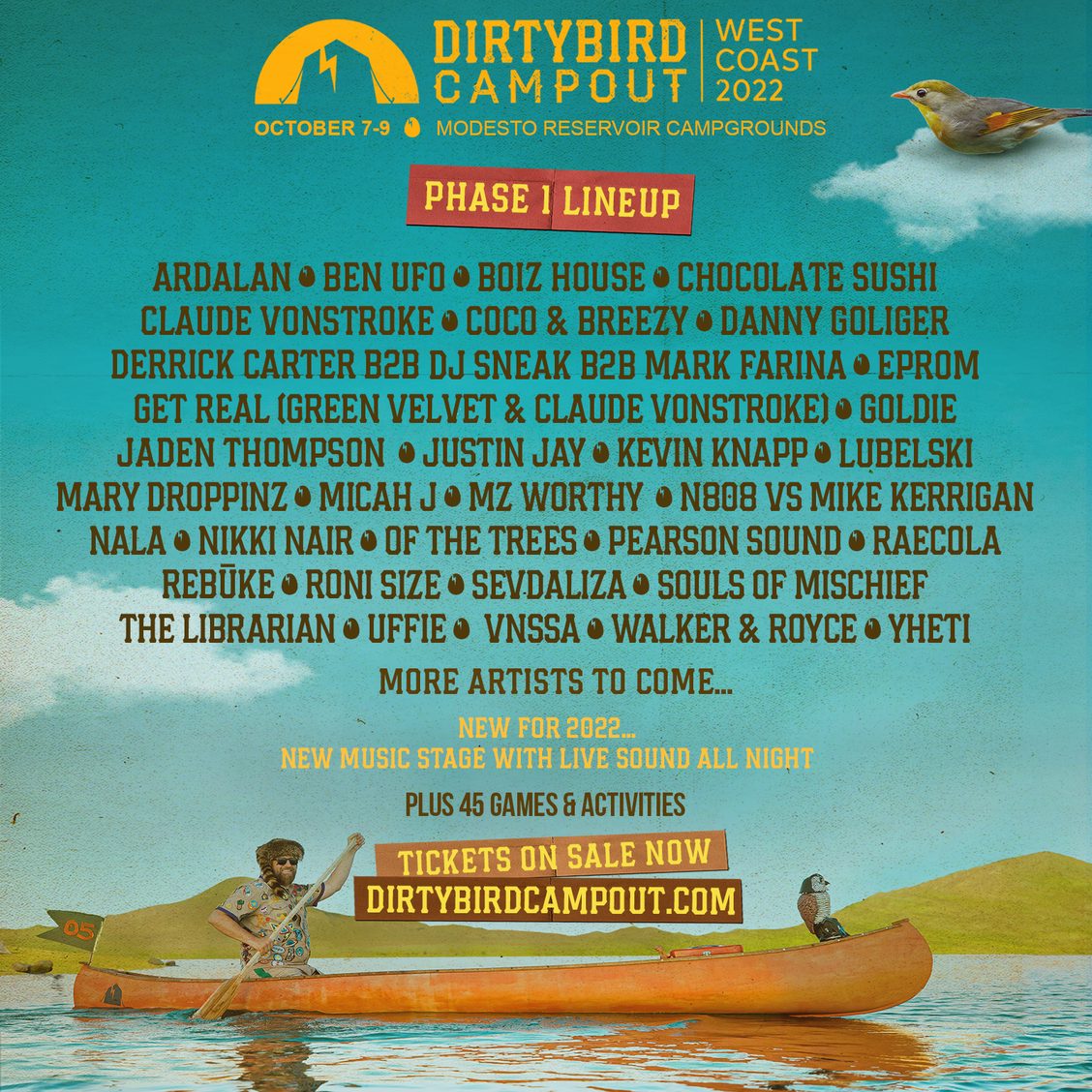 Eight years ago, house producer Claude VonStroke dreamt of an independent music festival that could cut through the mediocrity of corporate raving and foster a community of weirdos and dance heads looking for something more. The result was Dirtybird Campout – a wild and free playground for fans of all backgrounds, a place where creativity and positivity reign supreme, and a destination where you can come of age, again and again, every summer. Now, with this choose your own destiny ethos at its core, Campout prevails as the best boutique music festival in the world, where both the uninitiated and veterans merge on the dancefloor and games field alike to get down like it’s the last party on earth. Come see what all the hoopla is about at the Modesto Reservoir Campgrounds in Central California October 7-9.

Dirtybird Campout is best described as a summer camp for wannabe grownups. The fun begins upon arrival, where attendees are grouped into Orange, Green, Purple and Red teams to compete all weekend in over 45 events for the now famed Ironbird trophy. Both artists and attendees face-off on the dodgeball court, try not to run in the speed walking challenge, swim for the finish in the .5km Floaty Race, test their strength in Tug O War and so much more, all in a quest for one color team to take home the glory.

Read Also: Ryan Trey Teams Up With Babyface Ray For New Video ‘Only Us’

Claude’s Cabin remains an outpost for the oddities that make Campout one of the most unique events in the world. Whimsical game shows and activities like Ruffled Feathers Comedy, Lovebirds Dating Show, Lapdance For Your Life, Kat Fight Game Show, Beatbox Competition, How To Grow Shrooms, Spelling Bee, Bingo, Bad Drag Show, Deep House Yoga, and so much more bring fans and artists together under strange circumstance all night long.

For the 2022 edition, Dirtybird Campout has once again crafted an eclectic artist lineup that stands out from the rest of the festival circuit. Campers can look forward to a mix of international legacy acts and emerging stars that span the worlds of house, techno, bass, hip-hop, and beyond for a truly diverse musical adventure.

Thursday’s Early-Arrival Pajama Party kicks off with a special set from house legends Derrick Carter, DJ Sneak, and Mark Farina all going back to back for a party that’s certain to kick off the weekend right. Claude VonStroke welcomes fans back to camp with the warmup set.

This year’s edition of campout will also see the introduction of a new third stage, a Dirtybird Late Night Stage called The Hideout. Replacing the old silent disco, fans can expect a special line-up including all night tunes, sunrise sets and hilarious vibes. Curated by the legendary campout creative director, Blakeshine – this area is the unofficial camp counselors after party. Don’t be surprised if you have to participate in something ridiculous or answer some funny questions to get in the door!

The venue of the Modesto Reservoir Campgrounds offer clear waters perfect for swimming, RV Hookups alongside the lake for picturesque views, lush trees, and most importantly – unlimited opportunity for adventure. Regularly cleaned showers and bathrooms are available everywhere for use in addition to plenty of fresh water locations in all festival areas to provide the best camping experience possible for attendees.

Campers looking for an upgraded behind the scenes experience can also look towards the VIB Pass, which provides access to the backstage lounge area with exclusive amenities, private restrooms, and one BBQ voucher valid for any of the Friday, Saturday, or Sunday feasts.

Get tickets to Dirtybird Campout on their website and join the tight-knit Dirtybird family on the lakefront dancefloors of the Modesto Reservoir Campgrounds this October 7-9.

Related Topics:Dirtybird Campout
Up Next

Cheryl, 61, and Quran McCain, 24, who became TikTok sensations by sharing details about their relationship with more than 2.3 million followers on just one account (@Kingqurannewpage), have revealed they are willing to spend up to £120,000 on a surrogate to have a baby together. END_OF_DOCUMENT_TOKEN_TO_BE_REPLACED

The BBC has received six complaints against disgraced DJ Tim Westwood over alleged bullying and sexual misconduct, including a historical one that was referred to the police, despite previously insisting it was unaware of any concerns about the DJ’s behaviour. END_OF_DOCUMENT_TOKEN_TO_BE_REPLACED

Amber Heard’s legal teams filed an official motion in court on Friday that the verdict in her blockbuster case against Johnny Depp is thrown out. END_OF_DOCUMENT_TOKEN_TO_BE_REPLACED

US clergyman, Creflo Dollar, has denounced his position on tithing. For many years, Creflo had preached on the importance of Tithing and had informed his congregation that failing to tithe opens the door for devourers to come in and destroy a person’s life. END_OF_DOCUMENT_TOKEN_TO_BE_REPLACED

David Beckham and Victoria Beckham have taken to Instagram to profess their love for each other on their 23rd wedding anniversary. END_OF_DOCUMENT_TOKEN_TO_BE_REPLACED

Chris Brown has said the public is only interested in negative news about him but go silent when he drops an album. END_OF_DOCUMENT_TOKEN_TO_BE_REPLACED