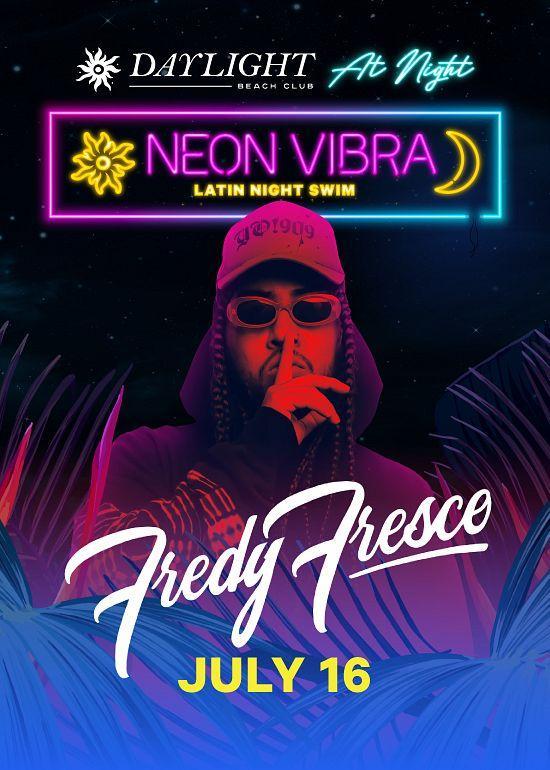 DJ Fredy Fresco announces his exciting new Las Vegas residency beginning July 16 with Daylight Beach Club at The Mandalay Bay. Daylight Beach Club is famous for being the ultimate pool party destination, and DJ Fredy Fresco will be participating in “Neon Vibra,” the first weekly Latin night pool party in Vegas. Given the lack of Latin DJs with Vegas residencies, DJ Fredy Fresco will be making a huge impact by bringing his singular flow to the party capital of the world, going up against top tier EDM DJs, Hip Hop artists and other heavy-hitting headliners.

“We knew when we started Neon Vibra that the quality of music was going to separate us from any other Latin night in the city. Las Vegas is world famous for entertainment with premier performers on the strip, and its nightlife is second to none. Bringing this new and unique nightswim to the city meant bringing in unique performers, and Fredy Fresco checks all the boxes with his DJ skills and high energy on stage.” – Maven Entertainment

DJ Fredy Fresco is a celebrated Mexican-American DJ and producer from Inland Empire, California. Born and raised in southern California, DJ Fredy Fresco grew up in a disadvantaged latino community, where he started cultivating his musical skills. Known for bridging the gap between genres and musical styles, DJ Fredy Fresco is as influential as he is charismatic and energetic. He’s known for creating electrifying environments and setting the tone, ushering in unforgettable moments for fans.

Over the years, DJ Fredy Fresco has taken over the local nightlife scene in southern California, establishing himself as a premier DJ with incredible talent. His drive, dedication and determination have propelled him to new heights and allowed him opportunities to perform internationally. At such a young age, DJ Fredy Fresco has accomplished what many other DJs dream of. He is currently the official Host and DJ for Papas & Beer, Baja Beach Fest, Sueños Music Fest and Coca Cola Flow.

DJ Fredy Fresco has gone from performing in his hometown to the biggest latin stages in the world. He’s opened up and rubbed shoulders with the biggest Reggaeton/Latin artists of his generation. Outside of creating music, DJ Fredy Fresco is passionate about community outreach, as he is actively involved in organizing and volunteering with toy drives, food banks and donation drives. DJ Fredy Fresco is quickly on his way to becoming a legendary powerhouse in the music industry with many exciting performances, projects and announcements in the near future.

Chris Level To Rebrand His Music In The Near Future?…This Is Why!

Divorces happen all the time, but the world never gets used to seeing celebrity couples break up. END_OF_DOCUMENT_TOKEN_TO_BE_REPLACED

Chrisean Rock posted a very steamy video of her and Blueface just hours after announcing she was leaving because he cheated on her. END_OF_DOCUMENT_TOKEN_TO_BE_REPLACED