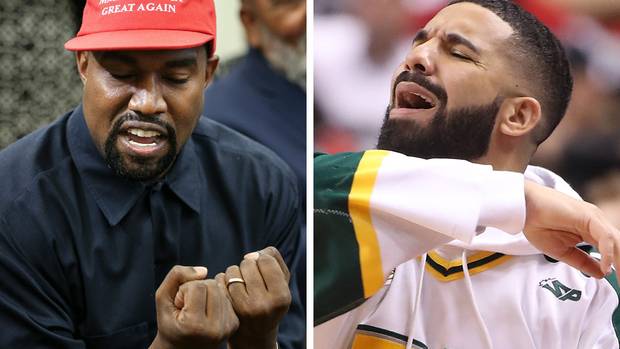 American Rapper, Kanye West has stepped  on a lot of toes this year and Canadian-born rapper Drake was not left out.

Drake in an appearance on LeBron James and Maverick Carter’s HBO series “The Shop”, went into detail about how his beef with Kanye West this summer came to be.

According to Drake, he confided in West about his son and plans to release the “Scorpion” album while working with him during a recording session in Wyoming.

The rapper said that West never informed him that he was working on an album even after he told him about his own project,only for the Chicago rapper to release “Ye” weeks before “Scorpion” was billed to come out.

Drake said,  “He sold me on this whole speech of like, I’m in a great place, I’m making money, I’m a father, and I wanna be Quincy Jones and help you. But in order to do that, you’ve gotta be transparent with me, yo gotta play me your music, and you gotta tell me when you’re dropping. And i know you don’t like to do things like that”.

Drake said he got a genuine vibe from it and so played him his music and told him when he was dropping. Kanye also played him “Lift Yourself” and he was like “Yo, you can have this if you want”. and i was hyped. I started writing to it. I went and ended up pretty much spending the majority of my time working on his music, just trying to like cook up ideas for him”.

The Canadian superstar said West went on to instigate Pusha T’s “The Story pf Adidon’ diss track which exposed that he fathered a secret child with an adult film star.

“We had a conversation. I wake up, and all these dates are out…Then the next two days, whatever, I wake up now to this text from him, passive like “Yo, I love you brother”. Then, the first album drops. And of course, there’s a diss song toward me that you produced, that’s talking about writing? I was just there with you as friends helping you, and now you’re dissing me”.

Drake said at that point he knew something was wrong;

“So I’m like this is dark. I knew something was gonna come up about my kid. They had to add the deadbeat dad thing to make it more appealing”, he concluded.

I have been Poisoned Several Times- Guru

Ghanaian Pizza brand, Pizza Inn has opened a new branch in East-Legon and has FREE pizza pies and more to share this christmas season. END_OF_DOCUMENT_TOKEN_TO_BE_REPLACED

Dancehall act, Stonebwoy has hinted that his legal team is taking serious action against his former signee Kelvynboy for comments he made after he was attacked in Ashiaman recently. END_OF_DOCUMENT_TOKEN_TO_BE_REPLACED

Internet sensation and “King of Gh Rap”, AY Poyoyo has caught the international audience with his unique style of music. END_OF_DOCUMENT_TOKEN_TO_BE_REPLACED

Canadian singer, Justin Bieber has reacted to the sexual assault allegation made against him by a Twitter user identified simply as “Danielle” with evidence. END_OF_DOCUMENT_TOKEN_TO_BE_REPLACED