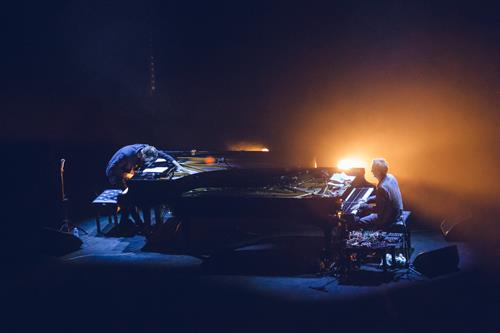 Longtime friends and first-time collaborators Dustin O’Halloran and Hauschka complete the line-up for VIDEODROOM. They will improvise on the themes of Lion, the 2016 Garth Davis drama they scored together. This Oscar-nominated score will serve as the starting point of the concert. Hauschka and O’Halloran will musically challenge each other, each at their own piano. ‘Cinematic Collaboration’ premiered at the Krakow Film Music Festival 2018 and will be performed 15 October at VIDEODROOM. Last month Film Fest Gent and Vooruit presented the first edition of VIDEODROOM, a 10-day unique cross-over universe, balancing between film and music, during the upcoming Film Fest Gent (9 – 19 Oct 2018). Artists and audiences will explore a new universe at the intersection between music, film and visuals. Ex-Sonic Youth frontman Thurston Moore opens the festival with his new score for short films by experimental filmmaker Maya Deren. ‘Cinematic Collaboration’ by Dustin O’Halloran and Hauschka now completes the festival programme. Garth Davis’ Lion (2016) marks O’Halloran and Hauschka’s first cinematic collaboration, reflecting the composers’ shared interests in both classical and avant-garde compositions. After pursuing solo careers for many years, both treated the film score as something that would add variety to their artistic work. Lion tells the journey of Indian boy Saroo, adopted by an Australian family, who decides to find his biological family and go home. The touching film, based on a true story, has gathered six Oscar nominations, including one for best music. The soundtrack, also rewarded with nominations for the Golden Globes and BAFTA Awards, forms the starting point of this concert. “The way a piece of music is played is just as important as the notes themselves. The one thing with Hauschka and I, in our music, the way we play it is such a big part of the sound, and I can’t play the way he plays, and he can’t play the way that I play. It’s so particular to our individual touch; it transmits a lot.” – Dustin O’Halloran Dustin O’Halloran is referred to as ‘neo-classical’ or ‘post-classical’ and first received widespread recognition after Sofia Coppola invited him to contribute music to her award-winning Marie Antoinette. O’Halloran’s solo pieces provided the movie moments of eloquent stillness. Ever since, O’Halloran has not only released a number of piano solo albums, but he has also gone on to score a number of films and TV shows, which resulted in an Oscar, Golden Globe and BAFTA nomination. O’Halloran has collaborated with Adam Wiltzie under the name ‘A Winged Victory For The Sullen’. Together they scored In the Shadow of Iris and God’s Own Country. Hauschka (Volker Bertelmann) is an avant-garde composer, songwriter and experimental musician who uses the ‘prepared piano’ as his primary instrument. The prepared piano refers to the technique of resting paper, marbles, drumsticks and other objects on the strings to produce odd, sometimes randomly generated sounds, that move the instrument in unexpected directions. With a background in hip-hop and some avant-garde aspects of techno music, Hauschka’s music blends classical, contemporary percussive and pop impulses, with an aura of measured melancholy. For the last few years, Hauschka has also built a prolific career in scoring for film with The Current War, Hotel Mumbai and Adrift among his most recent credits.]]>