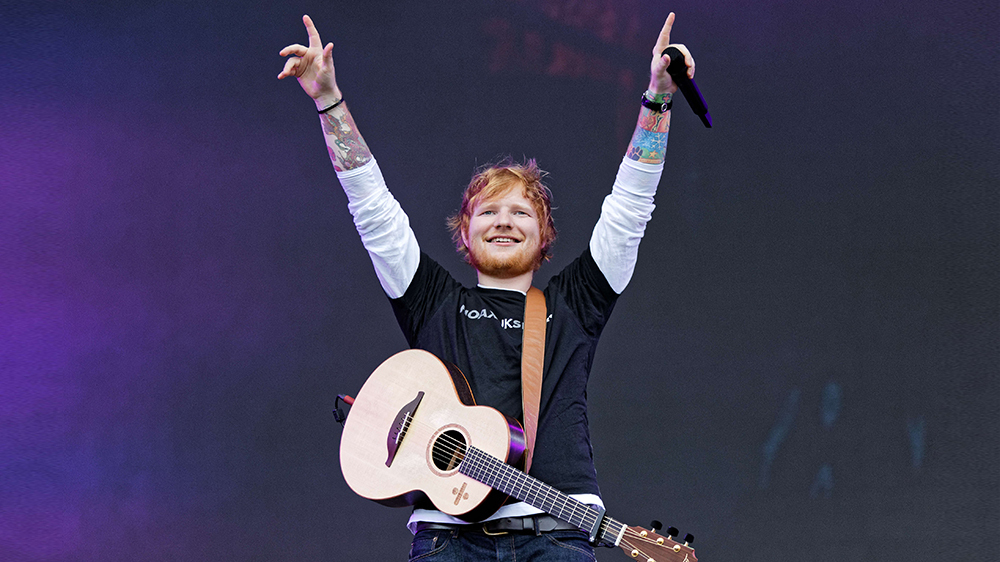 Ed Sheeran has been named the UK’s artist of the decade by the Official Charts Company.

Sheeran achieved the milestone after a combined run of 12 number one singles and albums between 2010 and 2019 – more than any other artist.

He’s also had the most weeks (79) at number one in both the album and singles charts in this period.

Shape Of You was the biggest hit of the 2010s, spending 14 weeks at number one and selling more than 4.5m copies.

Sheeran thanked his followers for his success.

“Thank you to everyone who’s supported me over the past 10 years, especially my amazing fans. Here’s to the next 10!”

Shape Of You is one of three Sheeran singles in the top five end-of-the-decade list. Thinking Out Loud is at number three while Perfect is at number five.

Overall, Sheeran has spent 38 weeks at number one in the singles chart and sold 53.8m tracks. His songs have also been streamed 4.6 billion times in the UK alone.

In the albums chart, X is at number three followed by Divide at number four.

Top 10 singles of the decade

“At the start of the decade, he was a little known, albeit highly-rated, young 18-year-old lad from Suffolk – but his catalogue of achievements since then are genuinely remarkable. Today, he is firmly established among the highest level of global music superstars,” Talbot added.

The star’s latest accolade comes a week after Spotify named him the UK’s most-streamed artist of the 2010s. Globally, only Drake achieved more plays.

The remainder of the top 10 biggest singles is dominated by male artists. They include Mark Ronson ft Bruno Mars at number two for Uptown Funk and Justin Bieber at number nine for Sorry.

Female singers only appear as featured artists – with Kyla cited for her collaboration with Drake on the track One Dance, and Jess Glynne for singing Clean Bandit’s Rather Be.

In the album charts, however, it’s Adele who comes out top, holding both the first and second positions with 21 and 25 respectively.

Top 10 albums of the decade

Her second album 21, released in 2011, has sold 5.17 million copies. It debuted at number one and spent 23 weeks at the top of the albums chart.

The only other woman in the top 10 albums is Emeli Sande who comes in at eight for Our Version Of Events.

With the chart company’s data spanning an entire decade of sales, older releases tend to dominate the countdown.

The most recent album in the top 100 is the soundtrack to The Greatest Showman, which was released in December 2017.

Related Topics:Ed Sheeran
Up Next

Amber Heard’s legal teams filed an official motion in court on Friday that the verdict in her blockbuster case against Johnny Depp is thrown out. END_OF_DOCUMENT_TOKEN_TO_BE_REPLACED

US clergyman, Creflo Dollar, has denounced his position on tithing. For many years, Creflo had preached on the importance of Tithing and had informed his congregation that failing to tithe opens the door for devourers to come in and destroy a person’s life. END_OF_DOCUMENT_TOKEN_TO_BE_REPLACED

David Beckham and Victoria Beckham have taken to Instagram to profess their love for each other on their 23rd wedding anniversary. END_OF_DOCUMENT_TOKEN_TO_BE_REPLACED

Chris Brown has said the public is only interested in negative news about him but go silent when he drops an album. END_OF_DOCUMENT_TOKEN_TO_BE_REPLACED

Congratulations are in order for singer Jhené Aiko and rapper Big Sean as they are reportedly expecting their first child together. END_OF_DOCUMENT_TOKEN_TO_BE_REPLACED

Videos have emerged of the moment a Russian ice hockey star who signed a million-dollar contract with an American team was rounded up by Russian policemen and taken to an army enlistment office before he is sent to fight in the war in Ukraine. END_OF_DOCUMENT_TOKEN_TO_BE_REPLACED