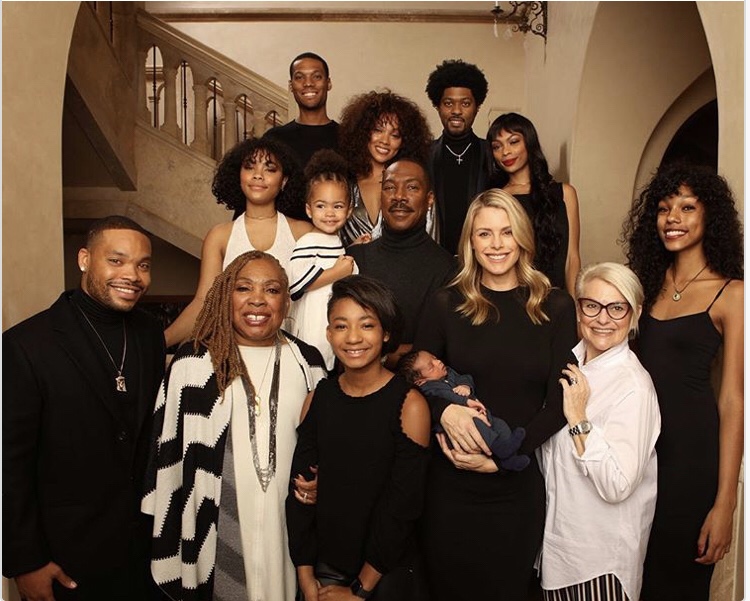 American actor/comedian, Eddie Murphy has posed for a rare picture with all of his ten children including the newest addition, a baby boy for Christmas!

The 57 year old comedian got all 10 of his children in one place for their first public photo together just under a month after his his fiancée, Australian actress Paige Butcher 39, welcomed their second child together, a son named Max Charles Murphy.

Murphy’s oldest daughter, Bria Murphy, 29, one of his five children with with ex-wife Nicole Mitchell, posted the sweet photo on Instagram of the proud papa with all of his kids.

He is shown holding Izzy, 2, his daughter with Butcher, while she cradles baby Max. The boy’s middle name is a tribute to Eddie Murphy’s brother, actor Charlie Murphy of “Chappelle’s Show” fame, who died of leukemia last year.

Also pictured are his oldest sons, Eric, 29, whom he had with Paulette McNeely, and Christian, 28, whom he shares with Tamara Hood. His daughter, Angel, 11, whom he had with former Spice Girland current “America’s Got Talent” judge Melanie “Mel B” Brown joined in the family fun.

The proud grandmother of the whole brood, Murphy’s mother Lillian, joined the family gathering along with Butcher’s mother.
Source: Today.com
]]>
Related Topics:eddie murphy
Up Next

Chris Brown Faces 6 Months In Jail For Owning a Monkey

Michael B. Jordan, Estelle, others to discover Ghanaian culture this December

R.Kelly has been removed from suicide watch after a face-off with federal authorities in the United States. END_OF_DOCUMENT_TOKEN_TO_BE_REPLACED

A multi-millionaire Russian businessman has been found shot dead at his mansion. END_OF_DOCUMENT_TOKEN_TO_BE_REPLACED

Cheryl, 61, and Quran McCain, 24, who became TikTok sensations by sharing details about their relationship with more than 2.3 million followers on just one account (@Kingqurannewpage), have revealed they are willing to spend up to £120,000 on a surrogate to have a baby together. END_OF_DOCUMENT_TOKEN_TO_BE_REPLACED

The BBC has received six complaints against disgraced DJ Tim Westwood over alleged bullying and sexual misconduct, including a historical one that was referred to the police, despite previously insisting it was unaware of any concerns about the DJ’s behaviour. END_OF_DOCUMENT_TOKEN_TO_BE_REPLACED