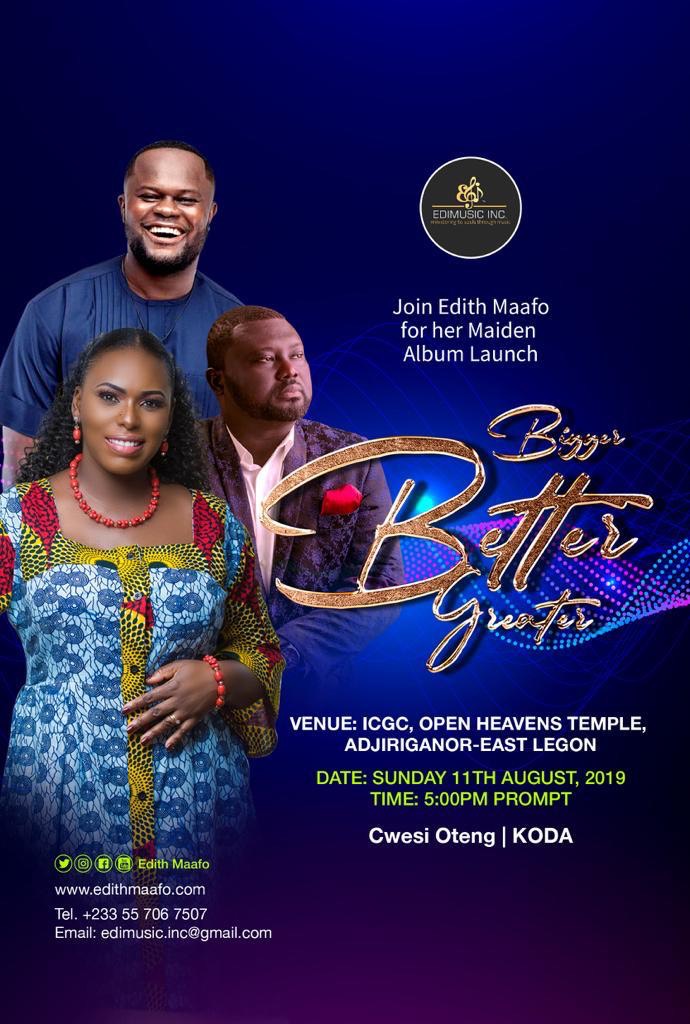 The album which has 10 songs including “I Overcome” will in no doubt resonate with those going through very challenging times in their lives. Edith, herself, has overcome great adversity: the death of her father at a very tender age and the loss of her only brother through inexplicable circumstances; a blow that was a setback emotionally, mentally and spiritually.

The much-anticipated launch which is expected to draw many people from far and near will feature renowned gospel artistes like Cwesi Oteng, Koda and other great ministers of gospel music.

With her first single “Jehovah” released in August, 2018, Edith uses scriptural based songs to encourage, inspire and witness for Christ and certainly, her debut album “Bigger, Better, Greater is one to look out for.

Edith comes from a family line of church choristers so singing has always been her most treasured gift.

At the tender age of ten, she became a member of the Calvary Methodist Church Junior Choir in Accra. She later joined the International Central Gospel Church (ICGC) as a young soloist ministering heartfelt gospel songs at the youth ministry.

For a very long time, Ghana Gospel has been waiting for our very own “Sinach”, “Cece Winans” or “Niclole Mullin” and with Edith Maafo’s “Bigger Better Greater” album, that Gospel minister has arrived indeed with a lot of experience, versatility to live up to expectation. Her vocal dexterity is simply timeless.

Edith Maafo has performed in crusades and church conventions across the United Kingdom. She now back at the International Central Gospel Church (ICGC) – Christ Temple in Accra where she’s currently one of the lead soloists.

The album is blessed with songs like “Lead me Lord” a hymn that will highlight Edith’s song writing ability. The song epitomizes Edith’s recording voice and style of music that has endeared her to many fans in UK and growing fan base in Ghana.

“That says the word of God” and “Child of God” will resonate amongst the youth of today who prefer fast, danceable songs and also shows Edith’s versatility.

Viola Davis makes a stunning transformation in the new trailer for ‘The Woman King’, in which she plays Nanisca, leader of the all-female warriors known as the Agojie. END_OF_DOCUMENT_TOKEN_TO_BE_REPLACED

African-American businessman and jet broker Kelvin Mensah, popularly known as PJKev has added his voice to the many people against the building of the National Cathedral. END_OF_DOCUMENT_TOKEN_TO_BE_REPLACED

Nigerian hip-hop artiste, Eedris Abdulkareem has disclosed that he is battling kidney failure and will have a surgical operation at the end of July. END_OF_DOCUMENT_TOKEN_TO_BE_REPLACED

According to reports from Nigeria, unidentified gunmen have attacked an ‘advance team’ of President Buhari’s presidential aides leading to injuries to two people. END_OF_DOCUMENT_TOKEN_TO_BE_REPLACED

Sensational highlife/afrobeat artist KiDi has said that his dream is to collaborate with Daddy Lumba on a song. END_OF_DOCUMENT_TOKEN_TO_BE_REPLACED