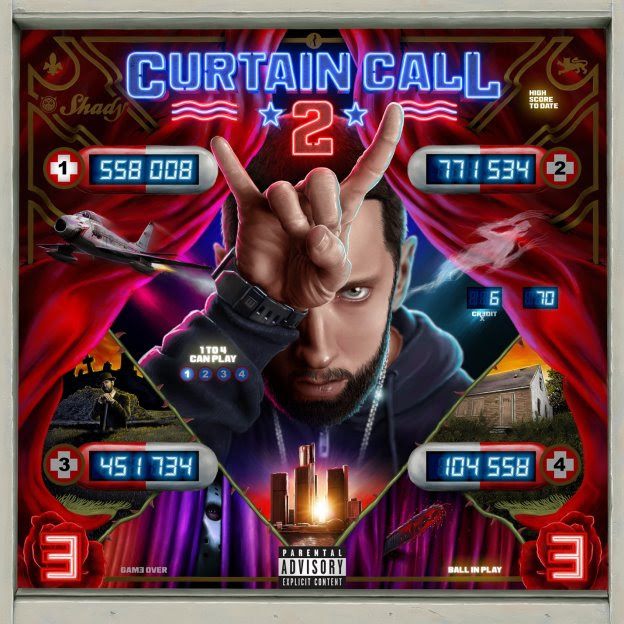 Today, rap legend Eminem announces his second greatest hits collection, Curtain Call 2, set to be released on August 5th via Shady Records/Aftermath Entertainment/Interscope Records. The news comes on the heels of the just released “From the D 2 the LBC,” an epic new single featuring fellow icon Snoop Dogg. The song – and it’s accompanying James Larese-directed video — made its global premiere on June 23 at Ape Fest, the Bored Ape NFT event at NFT.NYC.

The song is the lead single from Curtain Call 2, a hits collection comprised of the inimitable Detroit MC’s creative output since the 2005 release of Curtain Call: The Hits. Curtain Call 2 will include music from all Eminem projects from Relapse forward, including side-projects, guest appearances, film soundtrack songs, and of course selections from his solo albums.

In addition to the standard release, there will be a limited edition box set and a limited quantity of autographed vinyl available on Eminem.com – sign up for first access to these offerings here. (shop.eminem.com)

The Eminem/Snoop Dogg collaboration follows the June 16th release of “The King and I,” a CeeLo Green-assisted song Eminem contributed to the soundtrack for Baz Luhrmann’s Elvis biopic, which is also included on Curtain Call 2.

Along with the two recently released songs above, there will be one additional previously unreleased track on the collection, to be revealed in the coming weeks.

Watch the official video for “From the D 2 the LBC” HERE.. And check out a behind-the-scenes image gallery HERE.

Known for his acerbic wit, rapid flows, and endlessly personal songwriting, Eminem’s presence continues to loom large over both hip-hop and pop culture itself. Since releasing his debut album, The Slim Shady LP in 1999, he’s gone on to become the best-selling rap artist in history, having recently been certified with six diamond awards from the RIAA, and is now the most certified artist for gold and platinum singles in history.

In addition to the standard release, there will be a limited edition box set made available which can be ordered HERE.

19-year-old Florida rapper Smokingskul has just shared his new single and video “Nina”. Smokingskul is at the helm of a new era of plugg music known as “dark plugg”which substitutes the ethereal sounds of “plugg” with more tonal melodies that are accentuated by distorted percussion, producing a grimey, DIY sound. END_OF_DOCUMENT_TOKEN_TO_BE_REPLACED

Drake officially has more slaps than The Beatles. END_OF_DOCUMENT_TOKEN_TO_BE_REPLACED

Swizz Beatz and Timbaland have filed a lawsuit against Triller, claiming the company still owes them $28 million for the sale of their Verzuz series. END_OF_DOCUMENT_TOKEN_TO_BE_REPLACED

Two well-known Italian ‘trappers’, a type of rap music, have been arrested for a suspected racially motivated attack on a Nigerian factory worker near Monza in Rome. END_OF_DOCUMENT_TOKEN_TO_BE_REPLACED