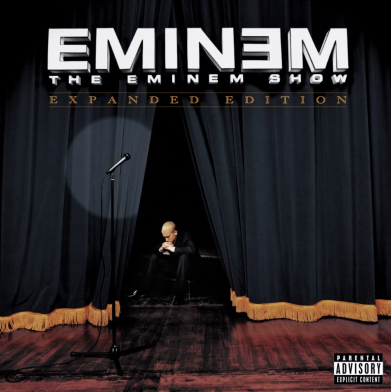 Eminem has just released the 20th-anniversary expanded edition of The Eminem Show (Shady Records/Aftermath Entertainment/Interscope Records) — his record setting, Grammy Award-winning fourth studio album. The deluxe reissue features 18 bonus tracks (including B-sides, live performances, instrumentals, and an unreleased song), none of which were previously available for download or streaming. Go HERE to listen to The Eminem Show (20thAnniversary Expanded Edition), and see below for the full tracklist.
The Eminem Show originally scheduled to be released on June 4th, had to be moved to May 26th to combat bootlegging and satisfy customer demand. Despite the change in date, the 20-track powerhouse nevertheless debuted at #1 on the Billboard 200 based on a jaw-dropping ONE-DAY sales number of 284,000 records- the only album in history to accomplish such a feat. The following week saw The Eminem Show sell 1.3M copies, which currently stands as the  7th largest first-week US total of all time. The Eminem Showemerged as both the best-selling album in the U.S. and the best-selling album worldwide for 2002. The album earned diamond certification from the RIAA (awarded for sales in excess of 10 million copies in the United States) and has gone on to sell 27 million copies worldwide. Along with earning a nomination for Album of the Year at the 45th Annual Grammy Awards, The Eminem Show won in the category of Best Rap Album, while its seven-times-platinum lead single “Without Me” won Best Music Video.
As Eminem told SPIN Magazine at the time, “One of the frustrating things was people saying, ‘He’s got to cuss to sell records,'” he says. “That’s why with this album I toned it down a bit as far as shock value. I wanted to show that I’m a solid artist and I’m here to stay.”
Executive-produced by Dr. Dre — with most tracks produced by Eminem alongside his longtime collaborator Jeff Bass — The Eminem Show features guest appearances from Dr. Dre, Nate Dogg, Dina Rae, Obie Trice and D12. In addition to “Without Me,” the album features hit singles like “Cleanin’ Out My Closet,” “Superman,” and “Sing for the Moment.” Named the best album of 2002 by Blender, Muzik, and LAUNCH, The Eminem Show was also hailed as one of the best albums of the 2000s by a variety of publications.
Later this year, Eminem will release physical editions of The Eminem Show (20th Anniversary Expanded Edition), including a four-LP vinyl set along with CD and cassette versions.
TRACKLIST FOR THE EMINEM SHOW (20TH ANNIVERSARY EXPANDED EDITION)
1.      Curtains Up (Skit)
2.      White America
3.      Business
4.      Cleanin’ Out My Closet
5.      Square Dance
6.      The Kiss (Skit)
7.      Soldier
8.      Say Goodbye Hollywood
9.      Drips
10.  Without Me
11.  Paul Rosenberg (Skit)
12.  Sing For The Moment
13.  Superman
14.  Hailie’s Song
15.  Steve Berman (Skit)
16.  When The Music Stops
17.  Say What You Say
18.  ‘Till I Collapse
19.  My Dad’s Gone Crazy
20.  Curtains Close
[BONUS TRACKS]
1. Stimulate (B-side from “Cleanin’ Out My Closet” single)
2. The Conspiracy Freestyle (Featuring 50 Cent) (B-side from the “Business” CD Maxi)
3. Bump Heads (Featuring 50 Cent, Tony Yayo, and Lloyd Banks) (B-side from the “Business” CD Maxi)
4. Jimmy, Brian and Mike (Previously Unreleased)
5. Freestyle (#1) (Live at Tramps, New York, 1999)
6. Brain Damage (Live at Tramps, New York, 1999)
7. Freestyle (#2) (Live at Tramps, New York, 1999)
8. Just Don’t Give a Fuck (Live at Tramps, New York, 1999)
9. The Way I Am (Live at the Fuji Rock Festival, 2001) (Featuring Proof)
10.  The Real Slim Shady (Live at the Fuji Rock Festival, 2001) (Featuring Proof)
11.  Business (Instrumental)
12.  Cleanin’ Out My Closet (Instrumental)
13.  Square Dance (Instrumental)
14.  Without Me (Instrumental)
15.  Sing For The Moment (Instrumental)
16.  Superman (Instrumental)
17.  Say What You Say (Instrumental)
18.  ‘Till I Collapse (Instrumental)
Over the course of his career, Eminem has sold over 130 million albums and 389 million singles worldwide. He was Nielsen SoundScan’s top-selling artist of the 2000s with 32.2 million albums sold in that decade in the U.S. alone. In addition, Eminem was also named Billboard’s Artist of the Decade for the same period, 2000 through 2009. Eminem has won 15 GRAMMY® Awards and an Academy Award®. His 2010 album, “Recovery,” was the first album in the U.S. to be certified platinum digitally. In March of 2021 his greatest hits album, “Curtain Call: The Hits,” became the first hip-hop album to spend a full decade on the Billboard Top 200 albums chart.  His most recent album, “Music To Be Murdered By” was released January 17th, 2020 and was his ninth straight studio album to debut at No. 1 on the Billboard Top 200, selling over 279,000 units. “Music To Be Murdered By – Side B” is an expanded version of the album which was released in December 2020.  Its release brought the album back to No. 3 on the Billboard Top 200, breaking a 50-year record for biggest chart leap.
Related Topics:eminem
Up Next

Videos have emerged of the moment a Russian ice hockey star who signed a million-dollar contract with an American team was rounded up by Russian policemen and taken to an army enlistment office before he is sent to fight in the war in Ukraine. END_OF_DOCUMENT_TOKEN_TO_BE_REPLACED

A woman who flashed a gun before attempting to make her way into Diddy’s BET after-party was arrested outside the mogul’s house. END_OF_DOCUMENT_TOKEN_TO_BE_REPLACED

Andy Goram has died at the age of 58 after a short battle with cancer. END_OF_DOCUMENT_TOKEN_TO_BE_REPLACED

A woman who went viral 2 years ago for marrying the man who caught the garter after she caught the bouquet at their friends’ wedding, has shared an update on their marriage. END_OF_DOCUMENT_TOKEN_TO_BE_REPLACED

Liverpool star, Mohamed Salah has committed his future by signing the biggest deal in the club’s history. END_OF_DOCUMENT_TOKEN_TO_BE_REPLACED